If you were not one of the lucky winners there is still time to join the KICKSTARTER campaign between now and October 18, 2017. 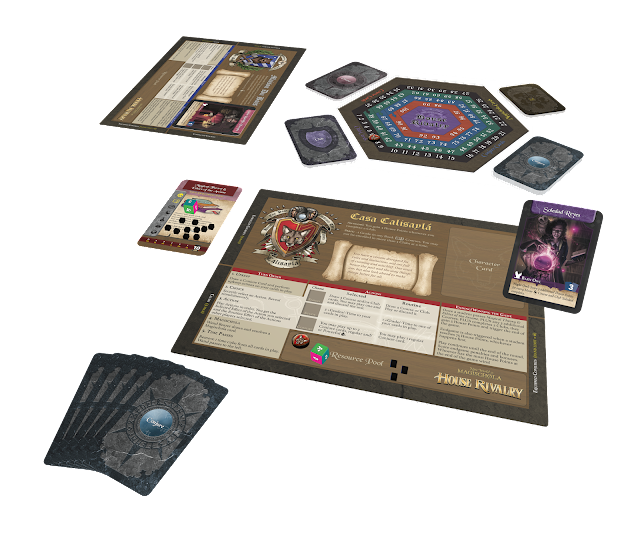 About New World Magischola House Rivalry:
Embrace your dream of going to wizard school, as you enroll in strange classes and clubs, study to improve your grade and accelerate your learning, and use magical spells and artifacts to cause mayhem as you race to win the First House Cup.


House Rivalry is a competitive card game that transports 2-5 players to the beginning of the semester at New World Magischola, North America’s premiere college of wizardry. Start your journey by selecting a unique character and house, then set out to complete your studies, where you’ll attend class, cast spells, fight monsters, and compete against rival students for the glory of the First House Cup!


But beware … like mundane schools, your success at New World Magischola will not only depend on how well you perform in your classes, but also how well you negotiate the social landscape. Will your popularity prevent other players from hexing you? Or will your overconfidence sow distrust and lead to your demise?

Find out more about New World Magischola House Rivalry on Kickstarter.com and BoardGameGeek.com.


Thank you Snow Dragon Games for bringing this awesome giveaway to EverythingBoardGames!


This contest is for three copies of New World Magischola House Rivalry, ends October 10, 2017 at 11:59 PM MST and is open worldwide. Void where prohibited or restricted by law. You may not win this contest if you have won a giveaway through EverythingBoardGames.com in the last 30 days. No Purchase Necessary.


Winner(s) will be selected October 11, 2017 via a random drawing from among all eligible entries and will be announced on this page and contacted by email. The winner(s) must contact EverythingBoardGames.com within 48 hours of notification. Any winner notification not responded to or returned as undeliverable will result in forfeiture at which point a new winner will be selected. The prize(s) will be fulfilled by Learn Larp, LLC.


By entering this contest you agree to being added to our (Everything Board Games) newsletter mailing list which can be opted out of at any time. This mailing list is used to notify you of new giveaways and to promote our sponsors who make all of this possible.