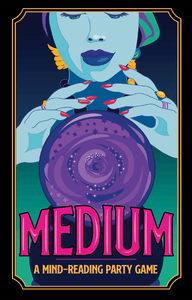 In the game Medium, players act as psychic mediums, harnessing their powerful extra-sensory abilities to access other players’ thoughts. Together in pairs, they mentally determine the Medium: the word that connects the words on their two cards, and then attempt to say the same word at the same time!

Disclaimer: The publisher provided the digital copy of Medium. The opinions expressed in the review are completely my own.

Medium is a digital card game for 1 to 8 players.  The idea is to phase with your neighbor.  Based on a combination of two words, you have to think about one identical word.

Solo mode : You vs the DB

Disclaimer : I’m a nerd in Processes optimization and statistics are my thing.

The solo-mode plays in ten rounds, you’ll have two words visible and will need to write one.  I guess that this word is then compared to a data base and the higher the occurrence of your word was the more points you’ll score.  Purpose is to have the maximum of points at the end of the 10th round.  The problem is that the foundation is rotted in my opinion.  First the way people associate words is the function of a lot of sociological factors, including culture, education and centre of interest, so one might question the way the database was made, and which kind of sample was used.  That data is not available of course and leaves a bitter taste that, after a few games – if you get there -, will have you asking if there is a database or if the points are just given at random.  Another solution used in AI is to have the database grow with inputs from the player (giving points at random during a few weeks then the database would be incremental) but hopefully that’s not the case because it would only feed the second problem, spelling.

You have to WRITE the word and not choose from a few options, which means that if the two words are “car” and “rubber” and you decide to vote for tyre (UK-English) you might be wrong if the creator used tire (US-English).  And I’m not even counting the words that you are spelling wrong. Now take my note about database growth, should this mechanism be implemented, it would mean that if enough people make an error on a commonly accepted idea, you might never guess the right word if your spelling is impeccable, which should frustrate enough people for it to be banned.

I would have loved to test it for real but I can only imagine how it works and that’s part of the problem.  There is no possibility for remote play together, which means that each player needs to have a copy to play or you need to find a game room with somebody else to play with like in most video games.  This leads to two problems, first the game sold only 150 times worldwide in February 2021 and for which alpha was released in May 2021, and secondly you’ll face someone you don’t know that might have a really different socio-cultural background and you might not understand his way of thinking at all.

I own a lot of board game ports on steam and they generally work really good.  That’s why I’m really disappointed in the Medium port to PC, the game actions are fairly simple.  Solo mode has 2 buttons to select the difficulty level (Plus and Minus) and one to start the game.  Without trying to break the game, I managed to get to level -67 (no minus level don’t really exist) which should be an exception of course.  During the check of word against the Database, the button is not protected against use, which lead me to mistakenly think that it wasn’t working and clicked multiple times on the “convey word” button and got me to play round 16/10 (the game should end by 10/10 of course).  And I encountered on multiple occasion exceptions without displayed errors that wouldn’t let me enter the word I had chosen for no apparent reason.  E.g. Emperor :

If you really need to play this game and if the implementation is improved, the only fun part I would see is the part where you discuss the reasoning that your torture let your torture mind think that the best association of “lettuce” and “turtle” was “cucumber” with your friends and laugh about it.  But really, you’d better stay away and keep those 10 bucks to do something better with them.

Artwork and Components:
The Good:
The Other:
[Maybe something was horrible, maybe it just didn’t work for you. Be honest, but be kind.]

Players Who Like: b
After reading Adam’s review, if this sounds like a game for you at the time of this posting Death Roads: All Stars is on Kickstarter check it out and back it HERE.