Congratulations Brad R, Geoff Kaufman, and Aubrey Fletcher winners of the Lanterns Bundle Giveaway! A big thank you to Renegade Game Studio for bringing us another awesome giveaway.

If you were not one of the lucky winners but would still like to get your hands on Lanterns: The Harvest Festival and Lanterns: The Emperor’s Gifts please visit your FLGS or online at AMAZON / AMAZON (respectfully).

Lanterns: The Harvest Festival – The harvest is in, and the artisans are hard at work preparing for the upcoming festival. Decorate the palace lake with floating lanterns and compete to become the most honored artisan when the festival begins. 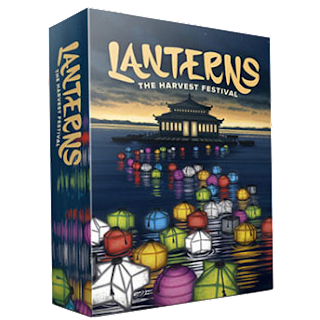 In Lanterns: The Harvest Festival, players have a hand of tiles depicting various color arrangements of floating lanterns, as well as an inventory of individual lantern cards of specific colors. When you place a tile, all players (you and your opponents) receive a lantern card corresponding to the color on the side of the tile facing them. Place carefully to earn cards and other bonuses for yourself, while also looking to deny your opponents. Players gain honor by dedicating sets of lantern cards — three pairs, for example, or all seven colors — and the player with the most honor at the end of the game wins.

Lanterns: The Emperor’s Gifts – The emperor has declared that pavilions shall be constructed among the lanterns floating on the lake for this year’s festival. Place pavilions to earn gifts from the emperor and redeem those gifts for powerful actions to make this the best harvest festival yet! 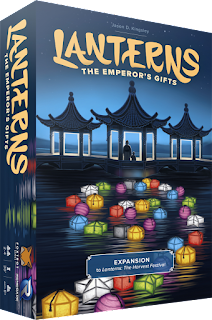 In Lanterns: The Emperor’s Gifts, an expansion to Christopher Chung’s award-winning Lanterns: The Harvest Festival, players start with a small supply of pavilions. When you place a tile, you may choose to build a pavilion on that tile. When you make a color match on a pavilion, you earn a gift from the emperor, a new currency that can activate special actions, as defined by emperor cards.

Two emperor cards are revealed each game. On their turn, a player can redeem two gifts to activate one card and perform the special action associated with it — make an extra dedication at the end of your turn, convert favor tokens into victory points, and more! These new abilities add variety and enhance the experience of Lanterns: The Harvest Festival while honoring the simplicity of the original game.

Thank you Renegade Game Studio for bringing this awesome giveaway to EverythingBoardGames!


This contest ends August 3, 2017 at 11:59 PM MST and is open to legal residents of North America who are 18 years or older. Void where prohibited or restricted by law. You may not win this contest if you have won a giveaway through EverythingBoardGames.com in the last 30 days.


Winner(s) will be selected August 4, 2017 via a random drawing from among all eligible entries and will be announced on this page and contacted by email. The winner(s) must contact EverythingBoardGames.com within 48 hours of notification. Any winner notification not responded to or returned as undeliverable will result in forfeiture at which point a new winner will be selected.