Congratulations Jeremiah Campbell and Mihaela Day winners of the King and Queendomino Giveaway! Thank you to Blue Orange Games for sponsoring this great giveaway.

If you were not one of the lucky winners you can pick up your copy of Kingdomino and Queendomino at your FLGS or on AMAZON (Kingdomino) or AMAZON (Queendomino). 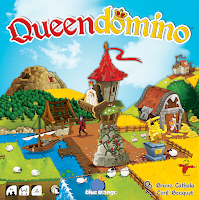 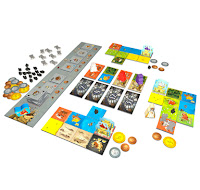 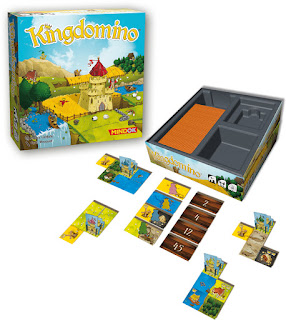 About Kingdomino:
In Kingdomino, you are a Lord seeking new lands in which to expand your kingdom. You must explore all the lands, wheat fields, lakes, and mountains in order to spot the best plots. But be careful as some other Lords also covet these lands…

Dominoes with a kingdom building twist. Each turn, connect a new domino to your existing kingdom, making sure at least one of its sides connects to a matching terrain type already in play. The game mechanics for obtaining the tiles is clever: the order of who picks first depends on which tile was previously chosen. Make sure to secure tiles with crowns- these royal treasures help to multiply the worth of your kingdom at the end of the game! The game ends when each player has completed a 5×5 grid, and then points are counted based on number of connecting tiles and crowns.

About Queendomino:
Build up the most prestigious kingdom by claiming wheat fields, forests, lakes, grazing grounds, marshes, and mountains. Your knights will bring you riches in the form of coins — and if you make sure to expand the towns on your lands, you will make new buildings appear, giving you opportunities for new strategies. You may win the Queen’s favors … but always be aware of the dragon!

Queendomino is a game completely independent from Kingdomino, while offering a choice of more complex challenges. Two to four players can play Queendomino independently, but also in connection with Kingdomino, allowing for games with 7×7 grids for four players, or for up to six players if you stick to 5×5 grids.

This contest is for two copies of Kingdomino and Queendomino, ends November 1, 2017 at 11:59 PM MST and is open to legal residents of the US who are 18 years or older. Void where prohibited or restricted by law. You may not win this contest if you have won a giveaway through EverythingBoardGames.com in the last 30 days. No Purchase Necessary.

Winner(s) will be selected November 2, 2017 via a random drawing from among all eligible entries and will be announced on this page and contacted by email. The winner(s) must contact EverythingBoardGames.com within 48 hours of notification. Any winner notification not responded to or returned as undeliverable will result in forfeiture at which point a new winner will be selected. The prize(s) will be fulfilled by Blue Orange Games.