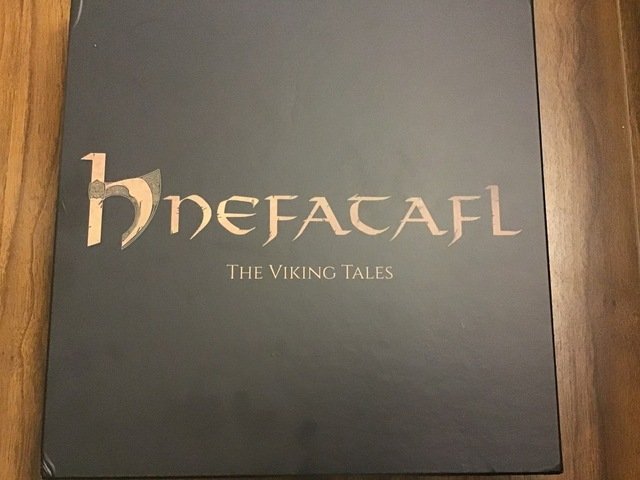 No. of Players: 2
Ages: 7+
Playing Time: 30-60+ minutes.
Find more info on BoardGameGeek.com
From the Publisher:
Immerse yourself in the world of new boardgame Hnefetafl: The Vikings Tales and lead your troops (handpainted figures) to victory in a strategic game (leather board) for up to four players! Play as a various characters from the Viking history and mythology while competing with your friends in various scenarios that we have prepared for you.
Disclaimer: The publisher provided the prototype copy of Hnefatafl The Viking Tales. The opinions expressed in the review are completely my own. 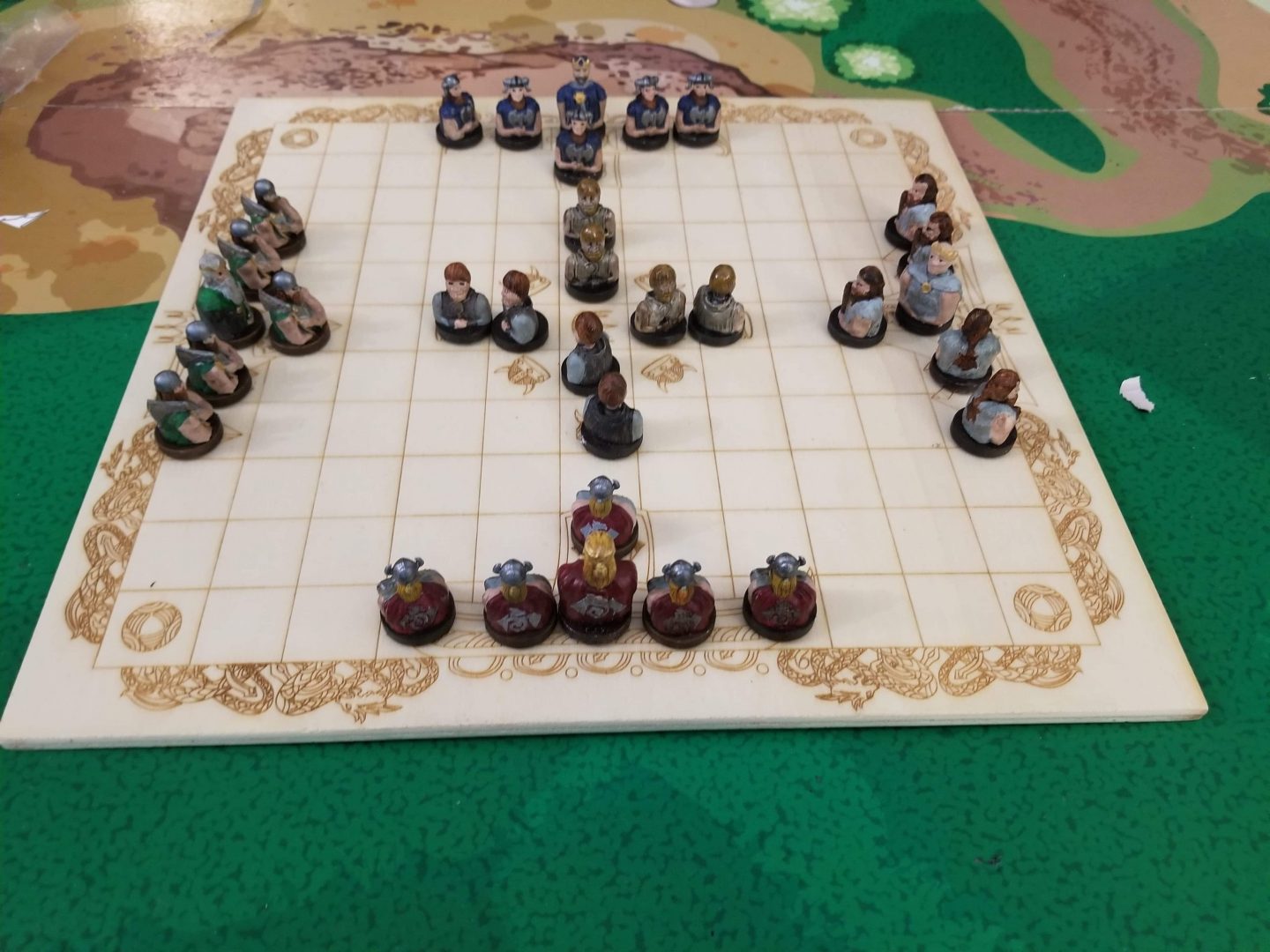 I am always looking for family friendly games that can suit almost all ages, and was happy when I came across Hnefatafl: The Viking Tales.

Originally a centuries-old game (that even manages to predate the existence of chess by about 1300 years!) this is a game of strategy that indeed feels like it immediately has a home in any head that enjoys the use of planning, reason, and perhaps most importantly predicting your opponents’ next move!

However, one thing that is worthy of note is the fact that the team at Edurevolutions has updated the classic game that was originally made for just 2 players into a 4-player battle royale! (They also plan on including the original 2 player rules as well, which is a very nice addition.

For the purposes of this review, keep in mind that this is a prototype copy and subject to change.

With the 4 player game seemingly being the main feature and draw to the game, this review will primarily be focusing on this method of play.

At the start of the game, each player will start in their owner side of of the game board, with their King piece surrounded by 5 Warrior pieces. There are 5 “Thrones” on the board spaces (which only a King can enter) ; one in each corner and one in the center of the board. The purpose of these will be revealed in just a moment…

Meanwhile, a group of serfs/servants will be configured around the center throne. If “captured” by a player, these can be “converted” into a warrior of the player who captured them, thus ensuring that players have a means of acquiring more warriors if they happen to need more (to a maximum of 7 per player). 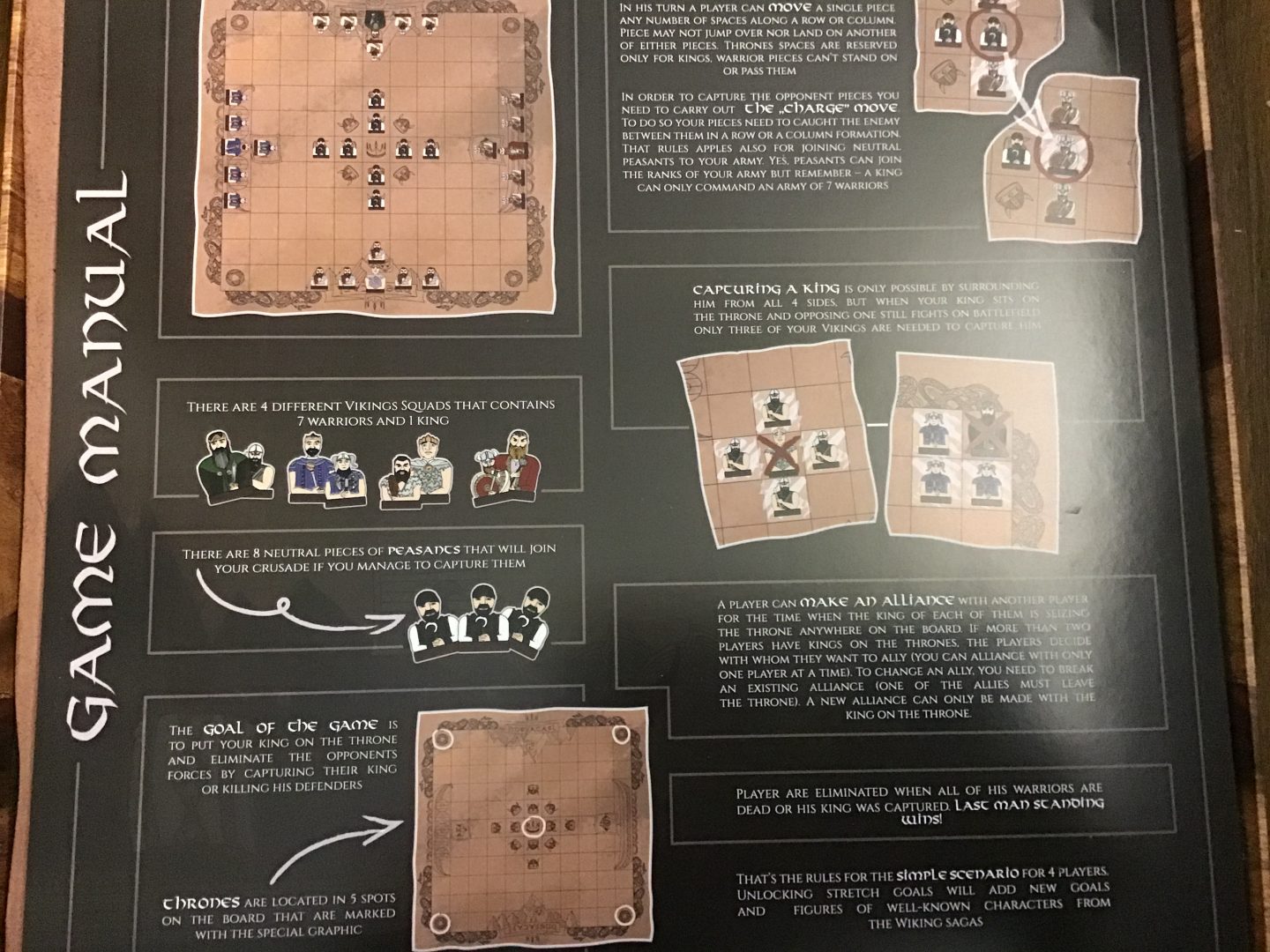 The rules are shockingly simple, consisting of a mere page! The method in which all player pieces move in this game is very much identical to the Rook from chess, with players being able to move their Warrior or King as many spaces as they would like in a straight or horizontal line on the condition that they cannot move thru any pieces at all.

Servants or Warriors can be captured by being surrounded by two opponents’ pieces on an identical horizontal or vertical plane—no diagonals!

Kings need to be surrounded on four sides (again, not on the diagonals) to be captured. And of course, capturing the King is the object of the game. If yours’ happens to get captured, you are out of the game!

One caveat to this is that if the King is on a throne ; if this is the case, they only need to be surrounded by three of the same opponent to be knocked out of the game. 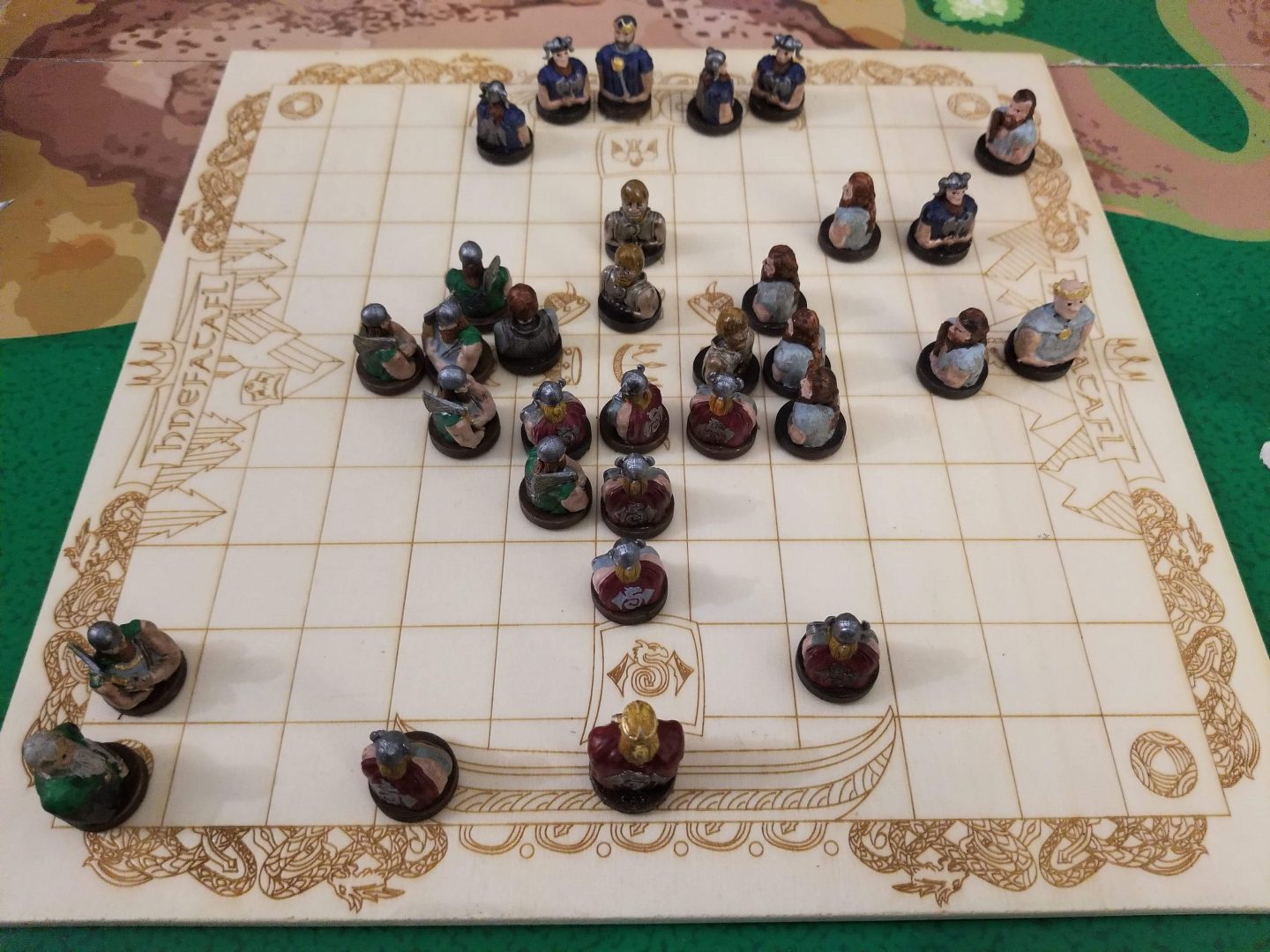 Another unique dimension to this game as opposed to chess is the ability to form alliances. You read that correctly ; when two kings occupy a throne space, they may agree to form a pact that allows them to team up against other players for easier takedowns of enemy warriors. Rather than requiring two of an identical enemy to be captured, warriors can be captured by a combination of just one of each of the allied opposition. For example, if Red and Green players agree to join forces, an enemy blue Warriors peice can be captured by a Red and Green piece on both sides.

Of course, the process of forming an alliance makes your kings more vulnerable so care needs to be exacted before executing this strategy!

This game is a fight to the finish, and ultimately there can only be one winner ; eventually, even an alliance will be broken and will fail once enough players are knocked out. The last player with a King on the board wins!

As you may have garnished from some of my other reviews, I spent many years working with K-8 graders, with many of my days spent stuck indoors during rainy weather with nothing but boards games and books to occupy the children’s time. As I was often in charge of purchasing board games for the kiddos, I am happy to say that this game is most definitely something I would have bought for them, and I am sure this is something they would have enjoyed. It is especially nice to see a game that, like chess, presses one to think ahead and develop/enhance their planning and rational skills, but with an easier set of rules that makes it easy for anyone to jump in. That is not to say that the strategy is lighter, however, I did find it equivalent in many respects, if not all. You do need to keep your eye all over the board to assess vulnerabilities (whether your own, or your opponent’s) and learn how to leverage positioning to your advantage, because (especially with 4 players) you can really seize opportunities by having all of your rivals placed where, individually speaking, they can do nothing to you without forming an alliance. 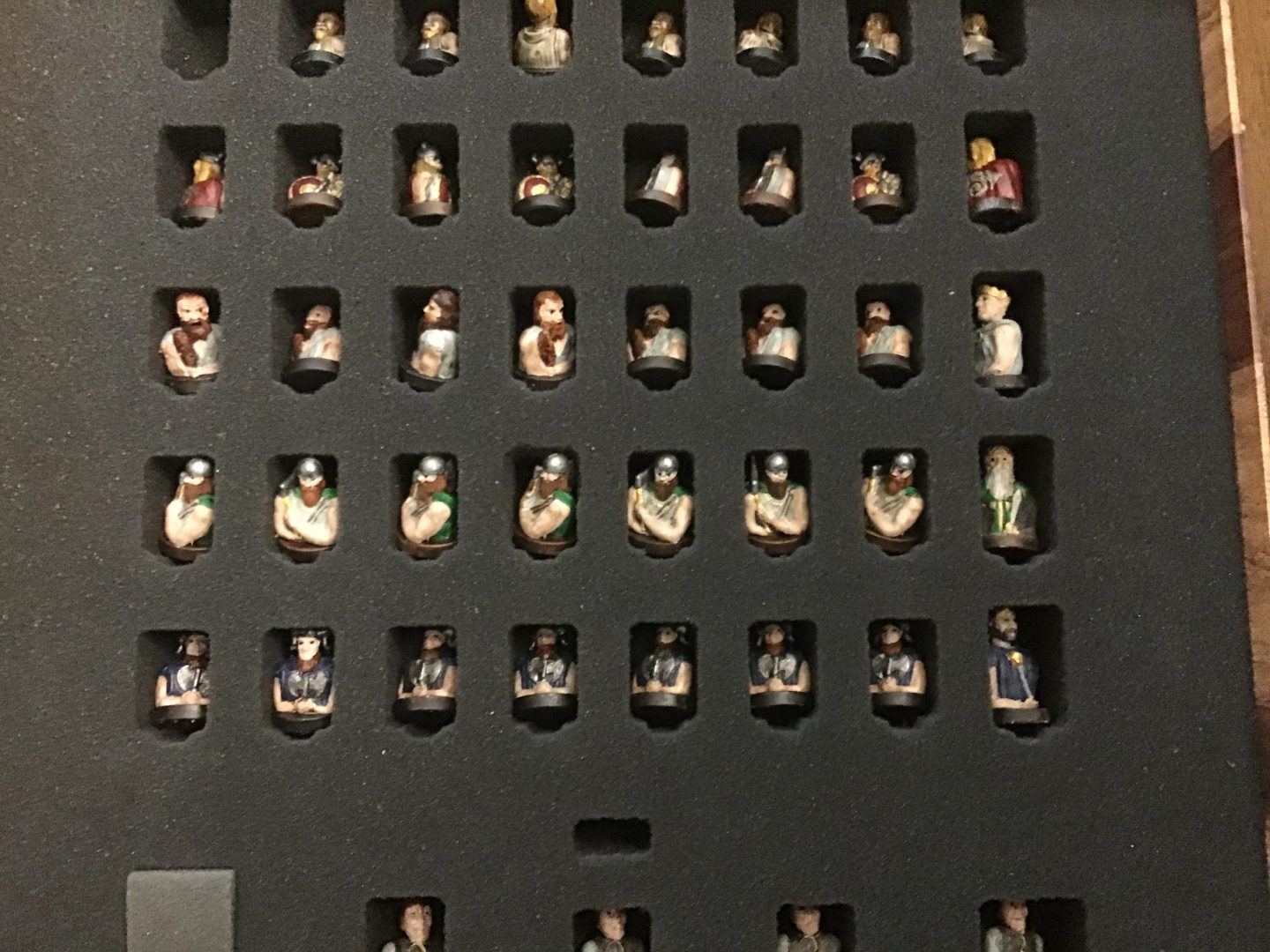 The game itself is purporting to come with painted pieces when the game comes out. With this being a prototype, I have no idea what the final product will look like, but at the time of this review, the paint on the figures appears to be rather spartan, minimalistic and lacking polish and detail. Maybe this will improve, but I am sure cost will be a consideration that will be taking into account when the folks at Edurevolutions make the final call, as having things look too fancy may push the cost of the game up to a level to that is unaffordable for some, which would mean that many people would miss this opportunity to pick up a great game.

Still, the game does come with both a nice MPC board in addition to a rolling leather board, which is a nice pairing for gamers on the go and want a board that can easily roll up while they pocket the game pieces in a ziplock bag. 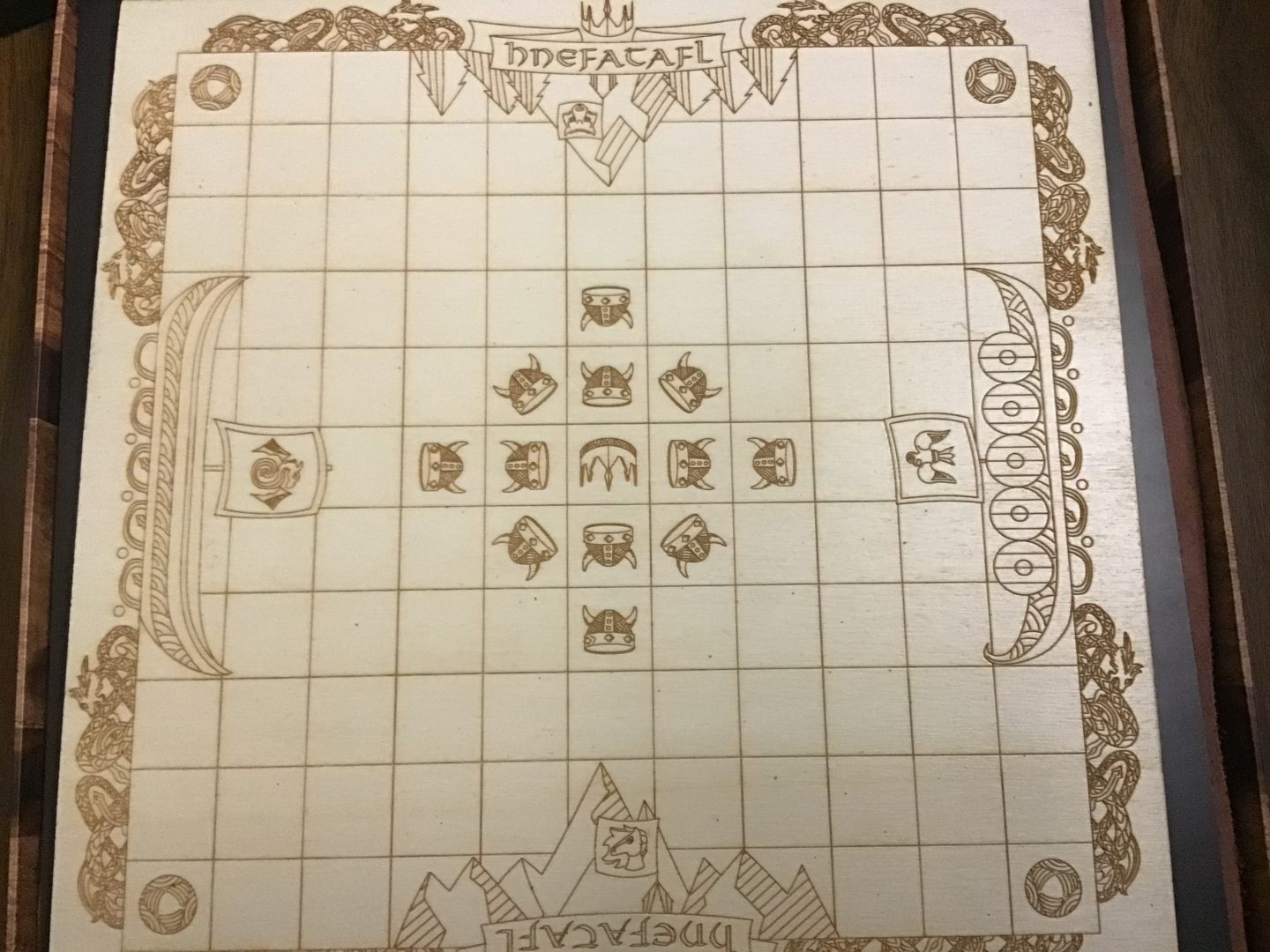 One thing that I do find bears mentioning is that Hnefatafl claims to play in just 30 minutes. At this time (especially given the likelihood of having younger minds play the game, and with a potential player count of 4), I find this estimation a bit hard to believe. Even with the rules being as simple as they are, it did take quite a while for players in our game to figure out what to do with their turn, which did make things a bit more drawn out compared to what we had originally envisioned. I could easily see a game consistently taking well over an hour with four players (ours did).

At the time of this writing, the English rules could also be tweaked and revised a bit to add further clarification to the purpose of alliances (it was initially unclear what this did, and I had to ask the developer to explain the utility of this feature), and also better translation from what I presume is the native polish of the game makers. But I am sure that will be worked out in the future given the current state of development.

But still, I do think this is a game is worth highlighting for any strategy buffs out there, especially those working with young minds. It is not strictly a game for children, adults could gain just as much in adopting this game into their collection. The Kickstarter for Hnefatafl is almost upon us, and I highly encourage you to check this game out if you are a fan of chess.

After reading Jazz’s review, if this sounds like a game for you at the time of this posting Hnefatafl The Viking Tales
will be live on KICKSTARTER starting this Monday 23 May 2022. Follow it and back it HERE once it launches.
Find out more at BGG.
Did you back it based on our review? Please comment below letting us know!

Check out Hnefatafl The Viking Tales and Edurevolutions on:

Jazz Paladin is an eccentric at heart — When he is not learning to make exotic new foods at home, such as Queso Fresco cheese and Oaxacan molé, he is busy collecting vintage saxophones, harps, and other music-related paraphernalia. An avid music enthusiast, when he is not pining over the latest board games that are yet-to-be-released, his is probably hard at work making jazzy renditions of classic/retro video game music tunes as Jazz Paladin on Spotify and other digital music services.  Check out Jazz Paladin’s original and classic video game cover music on the following links. CD’s are also available here!