Congratulations Donald Wayman and Ray Gans winners of The Godfather: Corleone’s Empire Giveaway! A huge thank you to our sponsor —MINIATURE MARKET—for bringing us this amazing giveaway!

If you were not one of the lucky winners you can get your copy of The Godfather: Corleone’s Empire at MINIATUREMARKET.com. 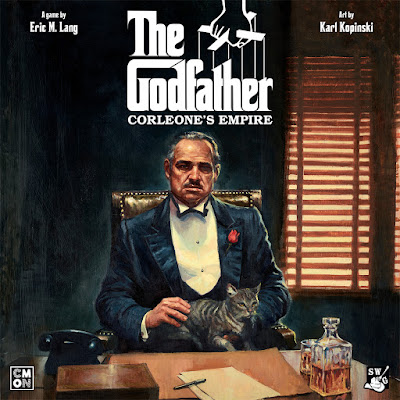 In short, the game is a streamlined, confrontational worker placement game filled with murder and intrigue. You play as competing mafia families who are vying for economic control of the organized crime networks of New York City, deploying your thugs, your don, your wife, and your heir on the board to shake down businesses and engage in area-control turf wars.

Money, rackets, contracts, and special advantages (such as the union boss) are represented by cards in your hand, and your hand size is limited, with you choosing which extra cards to pay tribute to the don at the end of each of the five rounds. At the end of the game, though, cash is all that matters, and whoever has the most money wins.

The game also features drive-by shootings in which enemy tokens are removed from the board and placed face-down in the river. 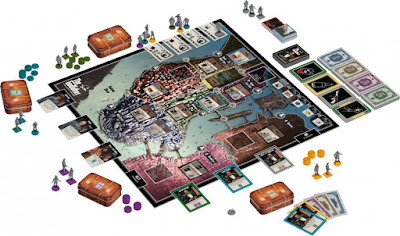 Find out more about The Godfather: Corleone’s Empire on Miniature Market.com.

Thank you MINIATURE MARKET for bringing this awesome giveaway to EverythingBoardGames!

This contest is for two copies of The Godfather: Corleone’s Empire, ends August 24, 2017 at 11:59 PM MST and is open to legal residents of the US who are 18 years or older. Void where prohibited or restricted by law. You may not win this contest if you have won a giveaway through EverythingBoardGames.com in the last 30 days. No Purchase Necessary.

Winner(s) will be selected August 25, 2017 via a random drawing from among all eligible entries and will be announced on this page and contacted by email. The winner(s) must contact EverythingBoardGames.com within 48 hours of notification. Any winner notification not responded to or returned as undeliverable will result in forfeiture at which point a new winner will be selected. The prize(s) will be fulfilled by MiniatureMarket.com.