A great big thank you to Eduardo Baraf and Pencil First Games for sponsoring this great giveaway!

GemPacked Cards is for ages 6 and up, plays 2-5 players, and takes about 20 minutes to play.

From BGG:
“GemPacked Cards is a gem-crafting, color-blending card game for 2-4 players based on the GemPacked iOS puzzle game. During each round, players use the Gemino Pip Tokens they draw to try to acquire higher level Gemino Squares and Gemino Diamonds (worth victory points) or trade for Sun or Nova cards. All cards are played face up. When the last Gemino Pip Tokens are drawn from the starting pile, each player has one remaining turn before the round ends and players tally their score. 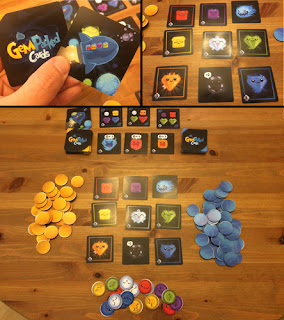 In more detail, at the start of a turn, a player draws two Gemino Pip Tokens, then takes any of the following actions in any order and as many times as they like:

At the end of their turn, the player refills the card grid from the draw deck one at a time. If they reveal any Action Cards, those cards are resolved immediately, starting with the active player, then moving clockwise around the table.

After the last Gemino Pip Token is drawn and the final player has a turn, players score their hands as well as Sun/Nova points. (GPips are not worth any points, but should be tracked each round as a tie breaker.) Whoever has the most points wins.”

Find out more about the GemPacked Cards on

The fine print:
This contest ends September 14, 2015 at 12 AM and is contingent based on whether this project reaches its funding goal on Kickstarter.com. This promotion is in no way sponsored, endorsed or administered by, or associated with, Facebook or Twitter. We hereby release Facebook and Twitter of any liability. Open to US residents ONLY. You may not win this contest if you have won a previous contest in the last 30 days. EverythingBoardGames.com and DCal Games is not responsible for fulfilling the rewards. This is the responsibility of the game publisher involved with the contest. Contestants release EverythingBoardGames.com and DCal Games of any liability. Winner(s) will be announced on this page and contacted by email by September 15, 2015.