Congratulations Samson Justice and Desiree DeYoung winners of the Dragon’s Hoard Giveaway! A huge thank you to Renegade Game Studios for bringing us this amazing giveaway.

If you were not one of the lucky winners you can get your copy of Dragon’s Hoard at your FLGS or online at AMAZON. 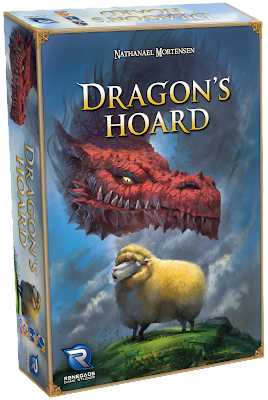 About Dragon’s Hoard:
In Dragon’s Hoard, each player plays a dragon hunting for treasure. Collect sheep from the farmer’s fields and use them to buy treasures, but watch out! Other players will send angry mobs and wizards your way to stop you. Defend yourself and battle your way to riches.

In game terms, players draft cards from a common draw pile before taking their actions. You want to buy as many treasures as you can. Dragons buy treasures with sheep that they’ve collected, while opponents will play terrible actions against you to keep you from tendering those sheep. Battle to keep your treasure, while trying to stop your opponents from doing the same.

At the end of the game, the player with the most victory points from treasures and bonuses wins!

Find out more about Dragon’s Hoard on RenegadeGameStudios.com and BoardGameGeek.com.

This contest is for two copies of Dragon’s Hoard, ends October 26, 2017 at 11:59 PM MST and is open to legal residents of North America who are 18 years or older. Void where prohibited or restricted by law. You may not win this contest if you have won a giveaway through EverythingBoardGames.com in the last 30 days. No Purchase Necessary.

Winner(s) will be selected October 27, 2017 via a random drawing from among all eligible entries and will be announced on this page and contacted by email. The winner(s) must contact EverythingBoardGames.com within 48 hours of notification. Any winner notification not responded to or returned as undeliverable will result in forfeiture at which point a new winner will be selected. The prize(s) will be fulfilled by Renegade Game Studios.