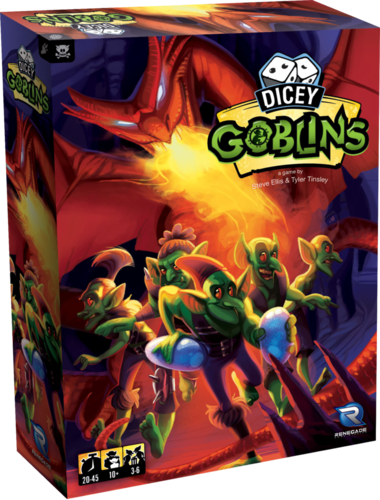 Congratulations Lance Peterson and Will Griesmer winners of the Dicey Goblins Giveaway! Another huge thank you to Renegade Game Studios for bringing us this giveaway!

If you were not one of the lucky winners but would still like a copy of Dicey Goblins you can purchase it on Amazon by clicking this LINK or the image below. Thanks to everyone who entered. 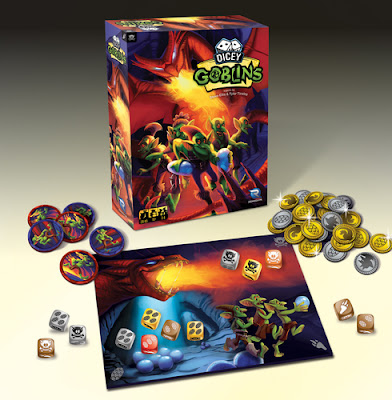 About the game.
These are special eggs. They have a glow that seeps deep into your soul causing an insatiable urge. Despite the peaceful look on her face, you know the mother dragon could roast your fragile goblin body without a second thought. You throw caution to the wind and inch towards the eggs. How many can you grab before you awaken the beast?

Dicey Goblins is a push your luck dice game where you will take on the role of Goblins stealing dragon eggs. Each round will challenge you to decide between attempting to raid the dragons lair or running for the exit. Collect 18 eggs or survive 6 rounds for a chance to win!

Find out more about Dicey Goblins on RenegadeGameStudios.com and BoardGameGeek.com.

The fine print:
This contest ends October 4, 2016 at 11:59 PM MST. This promotion is in no way sponsored, endorsed or administered by, or associated with, Facebook or Twitter. We hereby release Facebook and Twitter of any liability. Open to US and Canadian Residents only. No purchase necessary. You may not win this contest if you have won a previous contest in the last 30 days. EverythingBoardGames.com and DCal Games is not responsible for fulfilling the rewards, this is the responsibility of the game publisher involved with the contest. Contestants release EverythingBoardGames.com and DCal Games of any liability. By entering this contest you agree to being added to our mailing list which can be opted out of at any time. Winner(s) will be announced on this page and contacted by email by October 5, 2016.