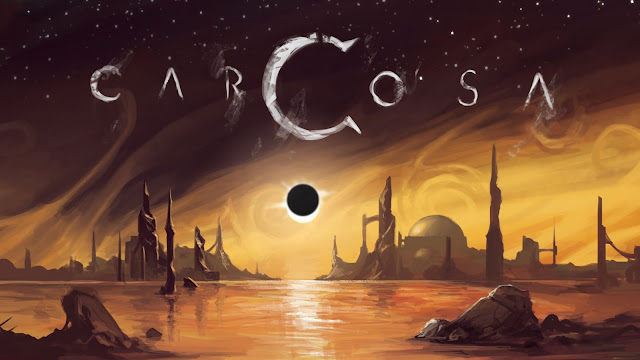 Congratulations Amy Thomason winner of the CarCosa Giveaway! A huge thank you to One Free Elephant for bringing us this awesome giveaway!

If you were not the lucky winner and would still like to get a copy of CarCosa you can pick it up on KICKSTARTER between now and June 30, 2017.

About CarCosa:
In Carcosa, you will summon forth the home of the Tattered King, one tile at a time. You will use your cultists to control leylines, conduct rituals and influence the districts of Carcosa itself. If they displease you, you can sacrifice them to the dark waters of Lake Hali for the pleasure of the King.

Each player leads a Lovecraftian Cult, taking turns using their Prophet to select a tile representing section of Carcosa from the Cult Board and adding it to the growing magnificent landscape of ritual sites, leylines, towers and domes. Players can then deploy Cultists to control a leyline, conduct a ritual or influence the districts they have just summoned.

But Carcosa is no normal city! You must stabilise your summoned tiles with power drawn from leylines or they may be reshaped by other cults! Recruit more Cultists by conducting the Forbidden Play at theatres you summon! Send your Cultists to gather power and watch them be driven mad by the terrible secrets! Use your Oracles to spend power on game-changing spells! Sacrifice your Cultists to the horrific Avatars of the King!

The game will end either when a Cult gathers enough power to conduct the final summoning of the King in Yellow or enough tiles are placed such that Carcosa becomes a permanent feature of our Earth and the Cult with the most power seizes control. Only one Cult can succeed in these insane tasks – but in Lovecraft’s mythos, can one truly call that winning?

Find out more about CarCosa on EverythingBoardGames.com, KICKSTARTER and BoardGameGeek.com.

Thank you One Free Elephant for bringing this awesome giveaway to EverythingBoardGames!


This contest ends June 27, 2017 at 11:59 PM MST and is open Worldwide. Void where prohibited or restricted by law. You may not win this contest if you have won a giveaway through EverythingBoardGames.com in the last 30 days.


Winner(s) will be selected June 28, 2017 via a random drawing from among all eligible entries and will be announced on this page and contacted by email. The winner(s) must contact EverythingBoardGames.com within 48 hours of notification. Any winner notification not responded to or returned as undeliverable will result in forfeiture at which point a new winner will be selected.