Congratulations  Michael Boone – winner of the Campaign Trail game giveaway!
A great big thank you to Cosmic Wombat Games for sponsoring this great giveaway!
If you didn’t win and you want to get your copy of Campaign Trail back them on: 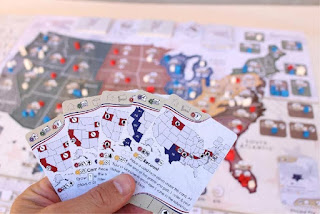 “Campaign Trail is a strategy board game in which players pit their campaign skills against one another as they vie for the Presidency of the United States.
The confetti is flying, the champagne is flowing, and you have just accepted your party’s nomination for President of the United States. Now it’s time to hit the Campaign Trail! How will you chart your path to victory? Engage in grass roots campaigning, advertise, sling mud at opponents, fundraise, debate, and so much more! But be sure to avoid revealing those skeletons you have buried in your closet. The candidate who best manages his resources and connects with the public on key issues will win the presidency!

On your turn you play a card and take an action from that card. Each card has a choice among 4 of the games 6 actions. You may (depending on what is on your card): 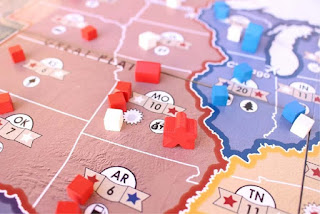 In addition to the base of card driven mechanics and area control, you will have a candidate card which gives you an individual player power, you will also have the opportunity to debate the current issues with your opponent. And finally, through the use of event cards, you can build up an engine to help out with resource production.” 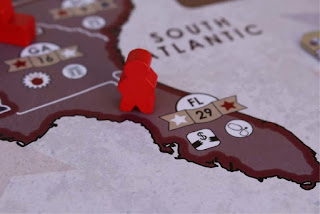 Find out more about Campaign Trail on

The fine print:
This contest ends September 24, 2015 at 12 AM and is contingent based on whether this project reaches its funding goal on Kickstarter.com. This promotion is in no way sponsored, endorsed or administered by, or associated with, Facebook or Twitter. We hereby release Facebook and Twitter of any liability. Open to US residents ONLY. You may not win this contest if you have won a previous contest in the last 30 days. EverythingBoardGames.com and DCal Games is not responsible for fulfilling the rewards. This is the responsibility of the game publisher involved with the contest. Contestants release EverythingBoardGames.com and DCal Games of any liability. Winner(s) will be announced on this page and contacted by email by September 25, 2015.