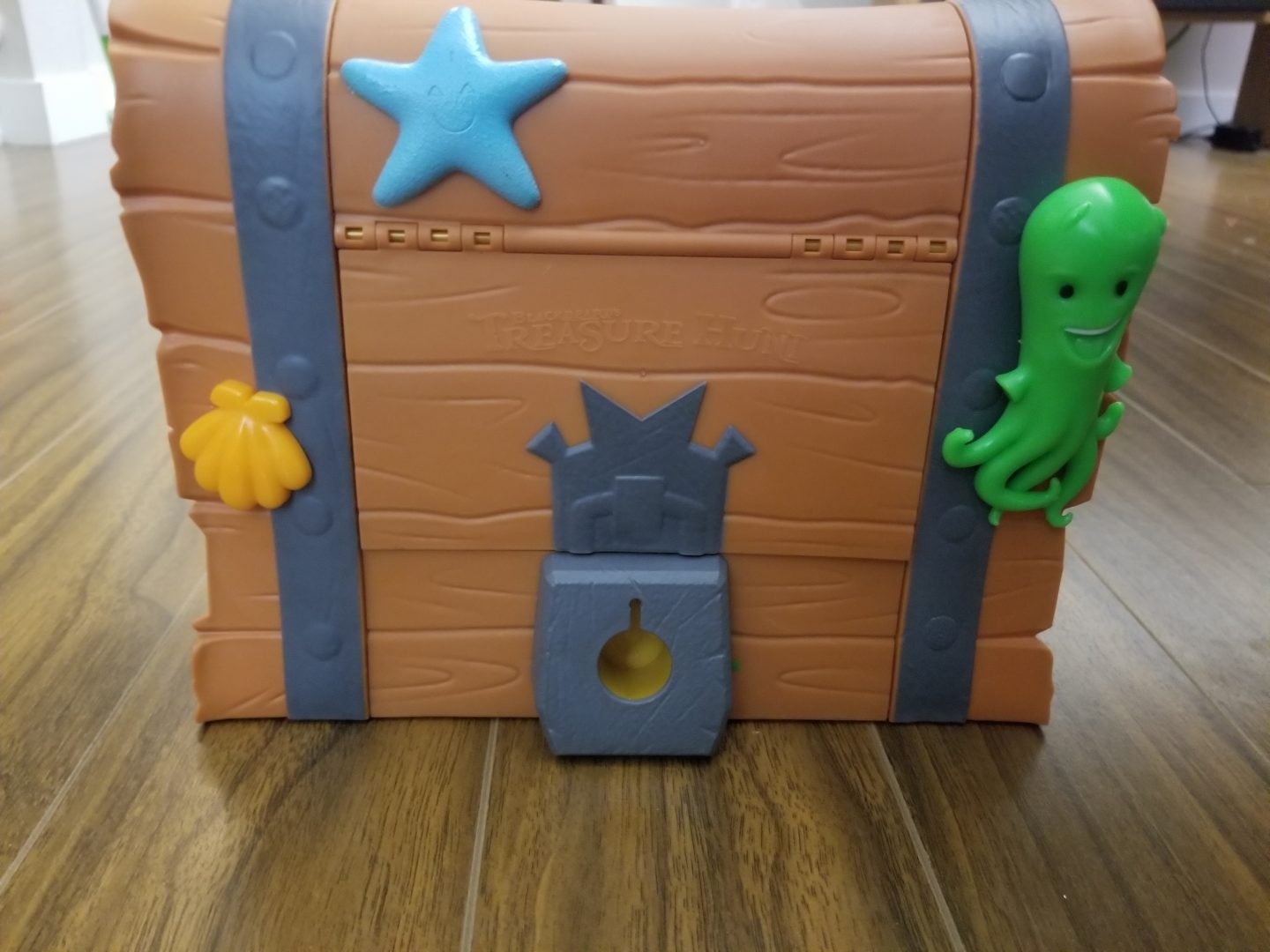 No. of Players: 2-4
Ages: 4+
Playing Time: Less than 5 minutes.
Find more info HERE.
From the Publisher:
BLACKBEARD’S TREASURE HUNT (Vango Toys) – Avast me hearties! This newest kid’s action game from Vango Toys has all the pirate-loving tropes for young swashbucklers! Follow the treasure map, unlock a treasure chest, and collect the booty of gold doubloons that spill out of the Chest! Takes both luck. . . and strategy.  Yo ho ho… this sounds like a lot of fun!!! Available on Amazon! (MSRP: $19.99; Ages 4+)
Disclaimer: The publisher provided the copy of BLACKBEARD’S TREASURE HUNT. The opinions expressed in the review are completely my own. 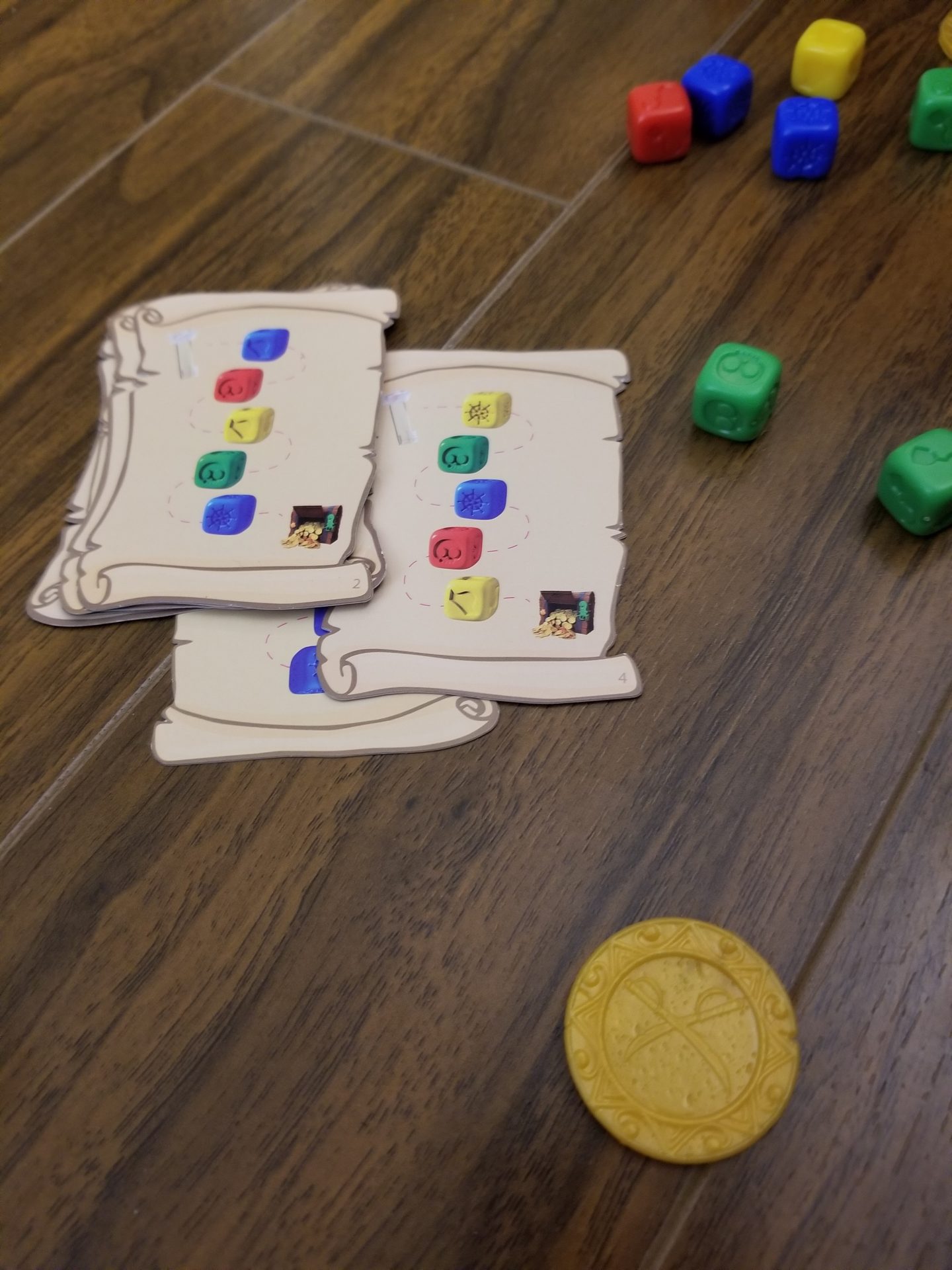 Finding quality games that are both creative and age-appropriate for pre-kindergartners as well as rigorous enough in design to withstand the everyday torture that toys often endure is perhaps the ultimate challenge for parents.

With this being said, when I was offered a chance to try the Blackbeard’s Treasure game and saw the pictures, my interest was definitely piqued.

These images, highlighting a plastic chest that quite amazingly does a great job of looking its part (for its intended age, of course), coupled with loads of plastic golden dab-loons , instantly appealed to the 3-year old in me, where I would often imagine finding buried treasure behind the Sangre de Cristo mountains that I could see from my back yard as a child. All I needed to do (so I thought) was to bring a shovel and follow a rainbow to where it ended behind the mountains some day, and I would be set for life…

There must be something universally appealing to all ages about finding a treasure chest. This was instantly apparent when we finally tried the game, managing not only to captivate my almost-four year old daughter as well as her seven-year old sibling.

Both got absolutely giddy at what the game did…but more on this later.

The game design is both simple yet gracefully elegant for its target demographic, but is also a joy for parents who love seeing the reactions it provokes from their kids.

“Keys” for each player

“Treasure Map” cards for each player.

The keys are of noteworthy design, being hollow and and as a result able to siphon up and hold the dice that are also a part of the “key” to unlocking the treasure.

First, each player is given a key and a treasure map card, which depicts the order of colors of dice that need to be inserted into each player’s key for them to “win” and be able to stick their key into the chest to unlock it, claiming their bounty and winning the round (or the game itself, if playing this way)

When the game starts, each player takes their key and tries to frantically squeeze in dice scattered across the table in accordance with the steps depicted on their card. If they can successfully match up the dice in their key to what is shown on the card, they insert the key into the chest, turn it, and it pops open, spilling out the hoard of coins onto the table.

This is such a simple yet profound design for this age. I cannot ask how it is that no one has thought about this before as a game concept!

For me, this design easily ranks among the best childhood favorites and  classics that have come to dominate our market over the past half century, such as Hungry Hungry Hippos , Chutes and Ladders, Connect Four, etc.

I really hope that other parents come across this review, because I feel this game needs as much marketing as it can get. It produces really fantastic reactions among not just the children when the loot pours out from the chest, but also anyone who watches their children’s happy exclamations as the coins spill out.

Is there anything bad to say about the game?

Not really. The price is not unreasonable at all from what I can tell perusing the internet, and the materials are really good quality.

The only “negative” I can see is that kids can be on an “honor” system to check the order of their dice before sticking it in trying to win, because the chest of course does not know whether or not the key has the correct or incorrect number and order of dice when it is opened, it simply obeys its limited function. But this was not an issue for us overall, our three-year old (and many other kids) are bright enough to figure out and enjoy ordering colors in a sequence, so I do not consider this to be a deal breaker at all.

With the Christmas season coming around the corner, this would be and definitely will be on my list of recommendations for all the parents I know with 3-7 year olds!

After reading Jazz’s review, if this sounds like a game for you at the time of this posting BLACKBEARD’S TREASURE HUNT is available for purchase on AMAZON for only $24.99. Check it out and get it HERE.

Find out more HERE.
Did you get it based on our review? Please comment below letting us know!

Check out BLACKBEARD’S TREASURE HUNT and Vango Toys on: