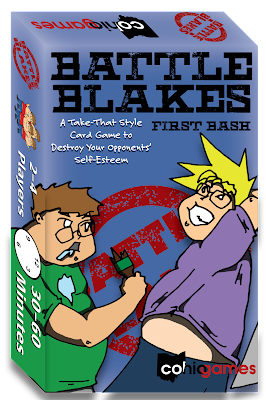 Congratulations Emanuel Baptista (1st Place) and Steven Rawlings (2nd Place) winners of our Battle Blakes: First Bash Giveaway! A big thanks you to Cohio Games for bringing us this awesome contest!

If you weren’t one of the lucky winners you can still get your copy of Battle Blakes: First Bash which is funding on Kickstarter right now. Click HERE or the image below to reserve your copy. 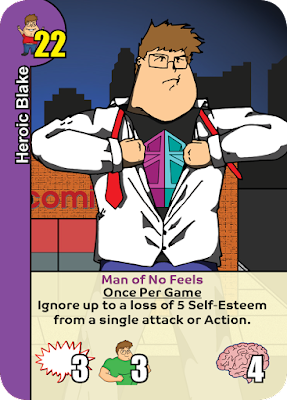 Enter the imagination of our reluctant, but lovable protagonist. His name is Blake and you never know which persona you’re going to get. Every person imagines themselves with different personas, Battle Blakes allows you to take on one of Blake’s. Battle Blakes: First Bash is an exciting take-that conflict card game. Each player has one of Blake’s many personas selected for them and then the fun begins.

Battle Blakes is a fun lighthearted game where your goal as a player is to destroy the other players’ Self-Esteem (health) becoming the one true Blake. There are many ways to knock Self-Esteem down; Verbal Assaults, Battles of Wits, or even cards that can directly target a player’s Self-Esteem.

The game is played in a determined number of rounds. Each player will get one turn during each round. Any player is able to play any amount of Action cards during any players turn, so everyone can be involved (in some degree) in a battle at any given point in the game. 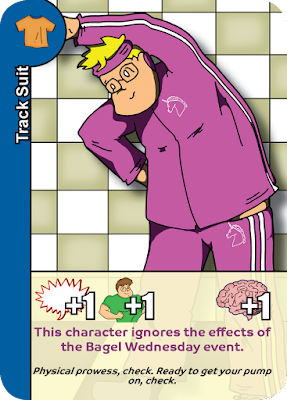 Find out more about Battle Blakes: First Bash on Kickstarter.com and BoardGameGeek.com.

Thank you Cohio Games for bringing this awesome giveaway to EverythingBoardGames!

The fine print:
This contest ends September 27, 2016 at 11:59 PM MST. This promotion is in no way sponsored, endorsed or administered by, or associated with, Facebook or Twitter. We hereby release Facebook and Twitter of any liability. Open Worldwide. No purchase necessary. You may not win this contest if you have won a previous contest in the last 30 days. EverythingBoardGames.com and DCal Games is not responsible for fulfilling the rewards, this is the responsibility of the game publisher involved with the contest. Contestants release EverythingBoardGames.com and DCal Games of any liability. By entering this contest you agree to being added to our mailing list which can be opted out of at any time. Winner(s) will be announced on this page and contacted by email by September 28, 2016.