Congratulations Yong Zhiyi, Kayla Robison, and Brandon Taylor winners of our Avertigos: South China Sky Giveaway! A huge thank you to Playware Hobbies for bringing us this awesome giveaway!

If you were not one of the lucky winners you can still back Avertigos: South China Sky on KICKSTARTER between now and September 28,
2017. 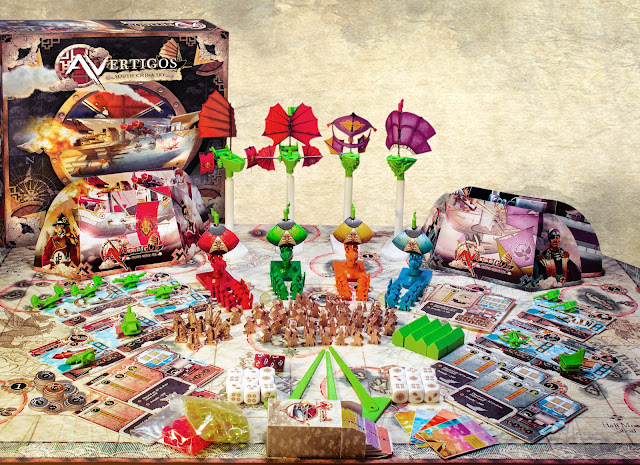 About Avertigos: South China Sky:
This science fiction story takes place in an alternate history of our world. In this first installment, the action takes place in the South China Sky, where the Dynastic naval armada is facing off against the combined fleets of the Singasari League to exert supremacy over strategic islands and control rich trade routes plying exotic goods.

Avertigos features modular miniatures and player boards – the modules on the ships can be mixed and matched to create unique load-outs with different strengths and capabilities.

Players navigate the skies via an innovative card-based maneuvering system, where they lay out their intended course with cards earned, which may also allow them to reap certain bonuses or suffer penalties. This system is singular in that it can work with or without the game’s board.

Players will use their formidable flying sail-ships and fearsome meeple armies to capture settlements and earn money to buy more powerful ships that will allow them to defeat their rivals and fully control the trade and resources of the islands. Players will trade bribes and favours to advance the interests of their own merchant clan. 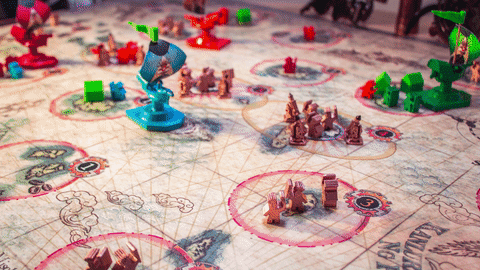 Find out more about Avertigos: South China Sky on Kickstarter.com and BoardGameGeek.com.

Thank you Playware Hobbies for bringing this awesome giveaway to EverythingBoardGames!

This contest is for One copy of Avertigos: South China Sky, ends September 15, 2017 at 11:59 PM MST and is open Worldwide. Void where prohibited or restricted by law. You may not win this contest if you have won a giveaway through EverythingBoardGames.com in the last 30 days. No Purchase Necessary.

Winner(s) will be selected September 18, 2017 via a random drawing from among all eligible entries and will be announced on this page and contacted by email. The winner(s) must contact EverythingBoardGames.com within 48 hours of notification. Any winner notification not responded to or returned as undeliverable will result in forfeiture at which point a new winner will be selected. The prize(s) will be fulfilled by Playwear Hobbies at the time of the Kickstarter fulfillment (Approx. April 2018).