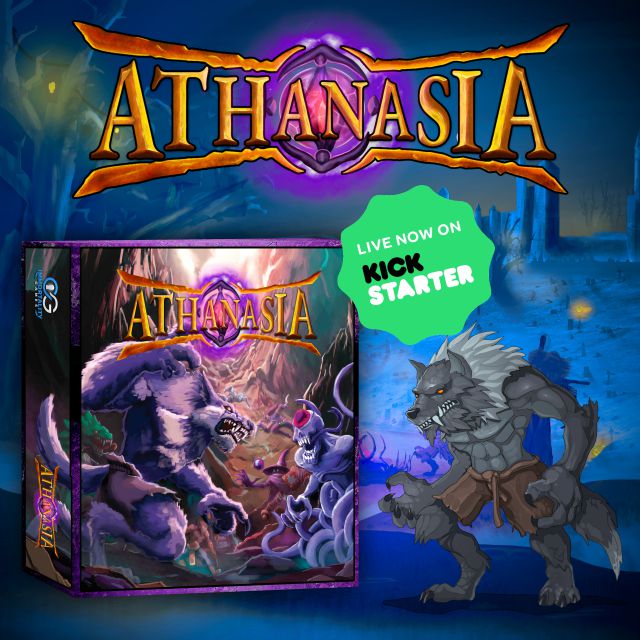 From the Publisher:
Athanasia is a Scifi/Fantasy Competitive Skirmish Wargame where players engage in tactical conflict to secure the key to immortality.

Players mobilize and strategically position their characters, leverage their surroundings to increase their power, and battle their rivals as they venture towards victory.

Every character has a value that determines their health, movement, defense, and attack power as well as additional character abilities that increase their effectiveness on the battlefield.

Each turn, a player is allotted 3 activation points for their civilization which they can use in a variety of ways to increase their own power as well as decrease their rival’s power as they carve their path towards victory.

In a given turn a player may: Move their characters across the battlefield based on their allowed movement, collect and activate items that spawn dynamically, activate obelisks to increase their movement, defense, and attack power, activate character abilities to weaken their rivals, and attack or steal items from adjacent rivals using a D20 die to simulate battle. As in any battle, strength in numbers always helps you come out on top. When attacking or defending from rivals, you get additional D20 roll or defense bonuses by positionally linking your characters together.

Securing the key to immortality first requires crafting it at the crafting table in the center of the battlefield using both the philosopher’s stone and antimatter which are spawned throughout the game. The race is then on for a civilization to secure the key and activate it at the battlefield’s exit point. The player that successfully activates the key at the exit point is the winner. Alternatively, you can win Athanasia by being the sole survivor after obliterating your rivals. Will you be the first to reach immortality?

Disclaimer: The publisher provided the prototype copy of ATHANASIA. The opinions expressed in the review are completely my own. 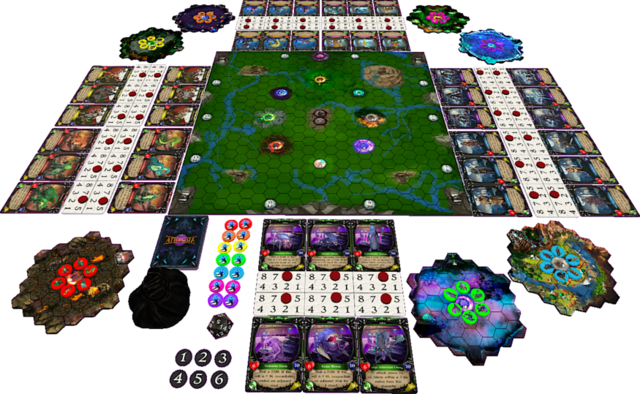 Overview:
Athanasia is a game that I did not read the description carefully enough. I saw 2-7 players with a playtime of 20 minutes. I was stoked. I received the prototype, and I looked again. It said minutes PER PLAYER. Well, I took ownership of my lazy reading, and luckily, I have a solid group of gamers. So, I took over to my friend’s house where we sat down to play the game, Athanasia.

Place the item deck off to the side, along with the obelisk tokens and movement tokens. Then, place all the item tokens in the draw, and you are ready to play.

The theme of various alien types all trying to achieve the same goal(s), but only one faction can, fits Athanasia nicely. Mechanically, the game works, but it does favor keeping your group together making a chain. This allows for your team to be at its most powerful. The mechanic of drawing a random chit and playing it on the board works, as it incentivizes you to cross the board, or breakaway from your team to try and get something powerful. 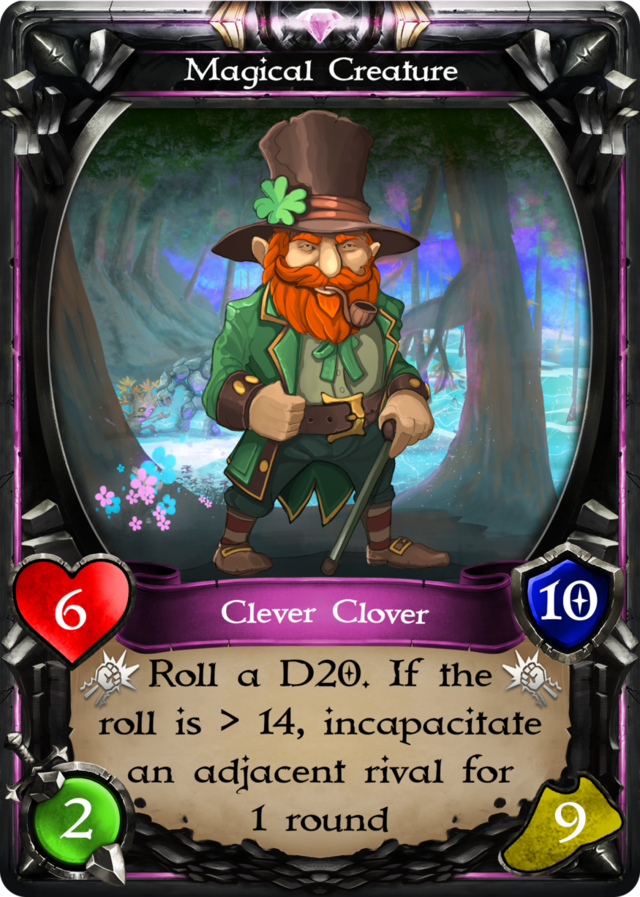 On a player’s turn, they have 3 activation points. Movement does not require an activation point. So, each turn, a player can move all 6 of its characters up to the full 6 spaces. This is where the game can bog down. During the movement, the character can perform active or passive actions. Active actions require an activation point, Passive actions do not. The active ones are attacking opponents, stealing items, activating an obelisk, using the character activity (if the active icon is present on the card), use an active item in possession of the character, or activating the immortality key at the exit point, ending the game. Passive actions are picking up and putting down items, transferring items to teammates, and performing a special ability if the action icon is not present. After the first round, at the start of each player’s turn, the D20 is rolled, and an item token is drawn from the bag and placed on the resulting die roll. If that space is occupied by another item or character, it is moved clockwise to the next spawn point that is empty. Find the corresponding item card, and place it to the side. When the item is picked up, the card is then placed under or over the character card of that character, and the item token is placed beneath it.

There are two special items; antimatter and philosopher’s stone. If a team can obtain both of these, and get them to the crafting table in the middle of the board, that team can craft the Immortality Key. This is the key to the exit portal and victory.

The other way to victory is the good old fashioned last civilization standing. This can be done by attacking the other players. To achieve this easier, taking over obelisks and attack towers to increase range, movement, and attack power. Keep your team together and use chains to attack and defend. Try to isolate characters of opposing forces. Show no mercy! This is the way our games end. We never crafted the key.

There was a team of artists for this game. I am not sure how Brandon put this team together, but they rocked it. The art is stunning. All the factions are unique. The home bases have beautiful colors and artwork. The colors are important to differentiate. There might be a few too many in the red family though.

Component-wise? I worked off a prototype copy, but it was amazing. The home bases were the only things that did not look polished. But, they would be hard to make on The Game Crafter. All the rest of the pieces looked and felt like they came right from a game manufacturer. A lot of thought went into the use of the components. The health tracker board was well designed to hold, to sit between the warriors and have a small chit to track the health of each one separately. The draw bag was nice. Personally, I like to use a lot of baggies to break my game down, and I will have to use a lot to separate this game when I get the final version. 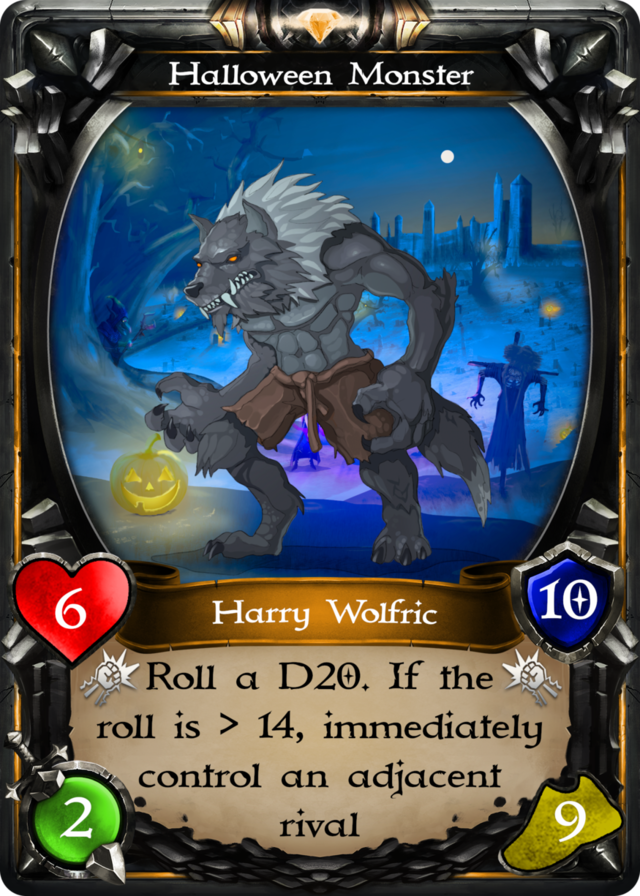 Athanasia was a little hard to work through the first time, but after a round, or two, we got the hang of it. And, we liked it. The gameplay was fun, but a little too much down time between turns. It did feel like Brandon took a lot of time with his design and components. Every component worked nicely, and made the game easier to play and keep track of health and movement.

The only major setback is that all the characters are the same on each team, and they all have the same stats: 6 hit points, 10 defense, 2 attack power, 9 movement, and 8 health. Then, they each have one of seven special abilities. I know that it would take a lot of effort to have built completely different armies, but at least balancing some of the stats would make for a slightly asymmetric game. There are a lot of components for this game, and really, just the home bases seemed unnecessary. Everything else fit perfectly into the game. The home bases were a bit odd. They did serve nicely as a starting point, but then, no one really went back to them after placing their characters into the main arena.

I make mistakes a lot. Some are happy mistakes. Some are not happy mistakes. Not reading the description thoroughly was a mistake. Thankfully, it was a happy one. Athanasia will be a solid game addition to my gaming nights. As I teach more people, I feel we will play it more. It just has a higher than normal learning curve for games I typically teach and play. My group enjoyed it, and it will move faster with every play!

After reading Adam’s review, if this sounds like a game for you at the time of this posting ATHANASIA will be live on KICKSTARTER starting on 29 March 2022. Check it out and back it HERE.
Find out more at BGG.
Did you back it based on our review? Please comment below letting us know!

Check out ATHANASIA and Immortality Games on: