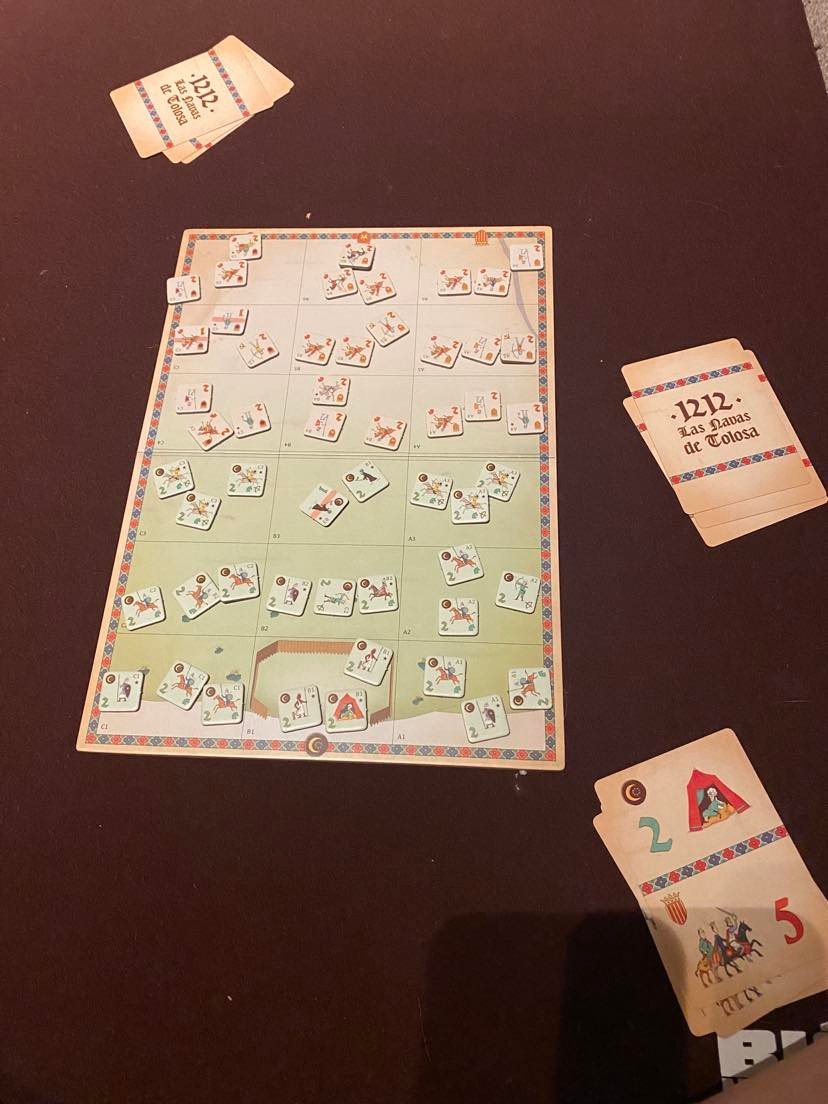 1212: Navas de Tolosa is a small tactical wargame for 2 players that allows you to revive this famous medieval battle of the Reconquista where two very different ways of understanding war face each other: the Christian one represented by the kingdoms of Castile, Aragon and Navarre, and the Muslim one represented by the Almohad Empire. Through action points, players move their troops across the battlefield and fight fiercely to death, but only if they learn to play their cards wisely they will be able to claim victory.
Each player plays one card face down. The two cards are revealed simultaneously. The player with the highest number wins the initiative. Starting with the player who has won the initiative, players take turns playing their cards as action points.

Disclaimer: The publisher provided the prototype copy of 1212: Las Navas de Tolosa. The opinions expressed in the review are completely my own.

Overview:
Draco Ideas was seeking reviews on their catalog. So, I perused it for games that looked up my alley. 1212 Las Navas de Tolosa jumped out at me. A historically based, two player, strategy game ticked off many boxes. It arrived literally the day I was packing to go on a weekend getaway with the family. The small box (roughly 9x6x1) fit in my bag with no problems. So, off I went to a cabin in the woods with the family, and a new game to play. Let’s see what Draco Ideas has to offer.

Set up takes about 5 minutes. Each player takes a side: Christians or Muslims. They take the appropriate pieces and place them on the board in the coordinates listed in the upper right corner. There should be 3, and only 3, pieces in each grid square. Separate the 9 Combat Cards. Shuffle and deal three to each player. Place the remaining three next to the board on one side. That is the set up.

The rules are a bit intimidating. However, the twenty-page booklet includes a variant and the actual historical context in the book. Only pages 4-15 are required for the base game. Again, this might sound like a lot of rules, but they are really well written and have visual examples to help. There might be more words than necessary, but the visuals really help with the understanding.

The battle took place between three Christian kings uniting against one Muslim army. The game embodies this perfectly. The game is asymmetrical, meaning each side has a different set of rules that must be followed.

Mechanically, the game is very sound. Each team must make a decision each turn on how they are going to move their associated units based on positioning and the cards in hand. Forward to attack? Backward to defend? Sideways to reinforce? (Not if you are the Christians.) Then, once you make your decision, your opponent responds.

Once the gameboard/battlefield is set up, you are ready to play. Being asymmetrical, the game has different objectives based on the side. 1212 Las Navas de Tolosa is not a game of eliminating your enemy like a standard war game. For the Muslim side to win, if the Christian side player must not be occupying any zones in the Muslim area and there are 4 or less Christian occupied zones on the battlefield. The Christian side wins if the Caliph al-Nasir is eliminated (killed). Let’s look at how to accomplish this. Also, if either side ever occupies twice as many zones as the other, the dominant side wins. I have lost all three ways!

The game plays in a series of rounds until one of the victory conditions is met. Each round consists of three phases: Initiative, Action, and Maintenance.

In the Initiative phase, each player lays a card facedown. When ready, the cards are revealed. The player who played the higher number goes first this round. Green numbers pertain to the Muslim side, red to the Christian. In case of a tie, the Christian side goes first.

Next, the Action Phase. The active player plays another card from hand and has as many actions as the associated number. The actions can be used to Move or Attack. These are the basic actions. Each side has different rules governing these actions. Movement costs 1 action no matter how many units move from one space to another. The Muslim side can move one space in any direction including diagonal, except for the units in B1 (there is a typo in the rulebook stating B2). These units are al-Nasir and his Black Guard. The Christian side can only move forward and backward and must remain in the column of their associated King. Also, if moving into a Muslim zone, it requires 2 actions.

As for the attack action, there are three basic attacks: archer attacks, standard attacks, and cavalry charge attacks. When attacking, one specific zone attacks one other specific zone. The attacker must also declare which unit is attacking. All attacks are successful, yet the attacked player may dole out the damage as they see fit. If an attack of 3 is dealt to a zone with 3 units, each unit can take one damage, or one unit can take 2 while another takes the third. When damaged, a healthy unit flips over to reveal a red line through the unit piece and a 1 in the lower right corner. If a unit is already damaged, it can take only one more attack, and it is then removed from the game. Removed pieces never return to the game. When a piece attacks, it is exhausted. A unit may only attack once per turn. Movement does not cause exhaustion. When a unit is exhausted, rotate it 45 degrees.

An archer attack requires that the unit has a bow and arrow icon in the lower right corner. The archers must attack at a distance of two zones, never one. The Christian side uses one action and inflicts one damage. The Muslim side spends two and inflicts two. Only one archer attack per side per turn may be taken.

A standard attack attacks a zone adjacent to the attacking zone. The attacking side flips over the top card of the game deck. Add the proper value to the value of the health of the attacking units. This is the total attack value. The defense value is the sum of the associated value on the card and the health of units in the zone being attacked. The difference of these values is the amount of damage dealt. The losing side suffers the damage. It is very possible that your attack will result in you taking damage.

A cavalry attack requires that one of the units in the attack have a horse icon in the lower right corner. All units in the attack are not required to have this icon. There are modifiers based on which side is attacking, but each side spends 3 action points to charge. If the Christians attack a zone containing a Muslim unit with the horse icon, the Muslim side may perform a special action (Karr-wa-l-farr) for free. The Muslim side must declare this special action before resolving the initial charge. If the horse icon unit survives, a reaction charge occurs with the Muslim side gaining a +2 modifier and the Christians receiving to modifiers.

There are two other quick actions. Rally allows you to heal one unit, but it is then exhausted. You can also switch cards played into the initiative side for 1 action point. You may want to do this to gain a better number for your side for the next turn. A second action point can be used to prevent your opponent from taking this action and undoing yours.

This repeats twice for each side, playing a different card. Once both players have had two turns, the maintenance phase occurs. Unexhaust each unit, pick up your card from the initiative area, shuffle the deck and discards, and draw two cards to start the next round with three cards.

There are a couple other special units and special actions, but you can read about those in the rulebook. The variant allows you to have 2 special cards that correlate with a specific unit on the board. Each of the cards can be used only once. If you wait too long, and that piece is eliminated, the card can no longer be used.

Keep playing rounds until someone meets a victory condition.

The art by Pablo Sanz works very well for this game. It gives the feel of the art from the 13th century. The iconography is a bit small and could require a lot of picking up and squinting at the pieces.

There are not a lot of different components to 122 Las Navas de Tolosa. The 54 unit pieces and board are made of a standard chipboard and should hold up nicely. The 9 combat cards are a decent quality as well. I would advise sleeving them as well as the 12 special cards for the variants to help with the wear on them. Beware, there are two sets of variant cards; one for English and one for Spanish.

1212 Las Navas de Tolosa recreates this battle perfectly. The asymmetrical gameplay allows for some interesting decisions and planning. The variant cards, which can and should be used after about two games, add a lot of replayability to the game. This will keep it on my table for a long while. The Son and I are always looking for good two-player games.

The unit pieces are a bit small and could have been a bit larger in size. This would make reading them a bit easier. This game is not well-designed for people with bad eyesight.

For a game that I knew nothing about, from a company I knew nothing about, 1212 Las Navas de Tolosa is an amazing game. The Son and I have enjoyed playing it a few times, adding in the variant cards for that crucial replayability. Of course, I have yet to defeat him no matter what side I play. His chess-brain gets the better of me. The learning curve was not as steep as we thought it would be based on the thickness of the rulebook. We picked it up quickly and made good use of the table at the cabin. Its small footprint makes this game very portable and travel friendly. For about $20, Pablo Sanz has made a fantastic game. I look forward to whatever game he makes next.

After reading Adam’s review, if this sounds like a game for you at the time of this posting 1212: Las Navas de Tolosa is only €25.00. Check it out and get it HERE.
Find out more at BGG.
Did you get it based on our review? Please comment below letting us know!

Check out 1212: Las Navas de Tolosa and Draco Ideas on: