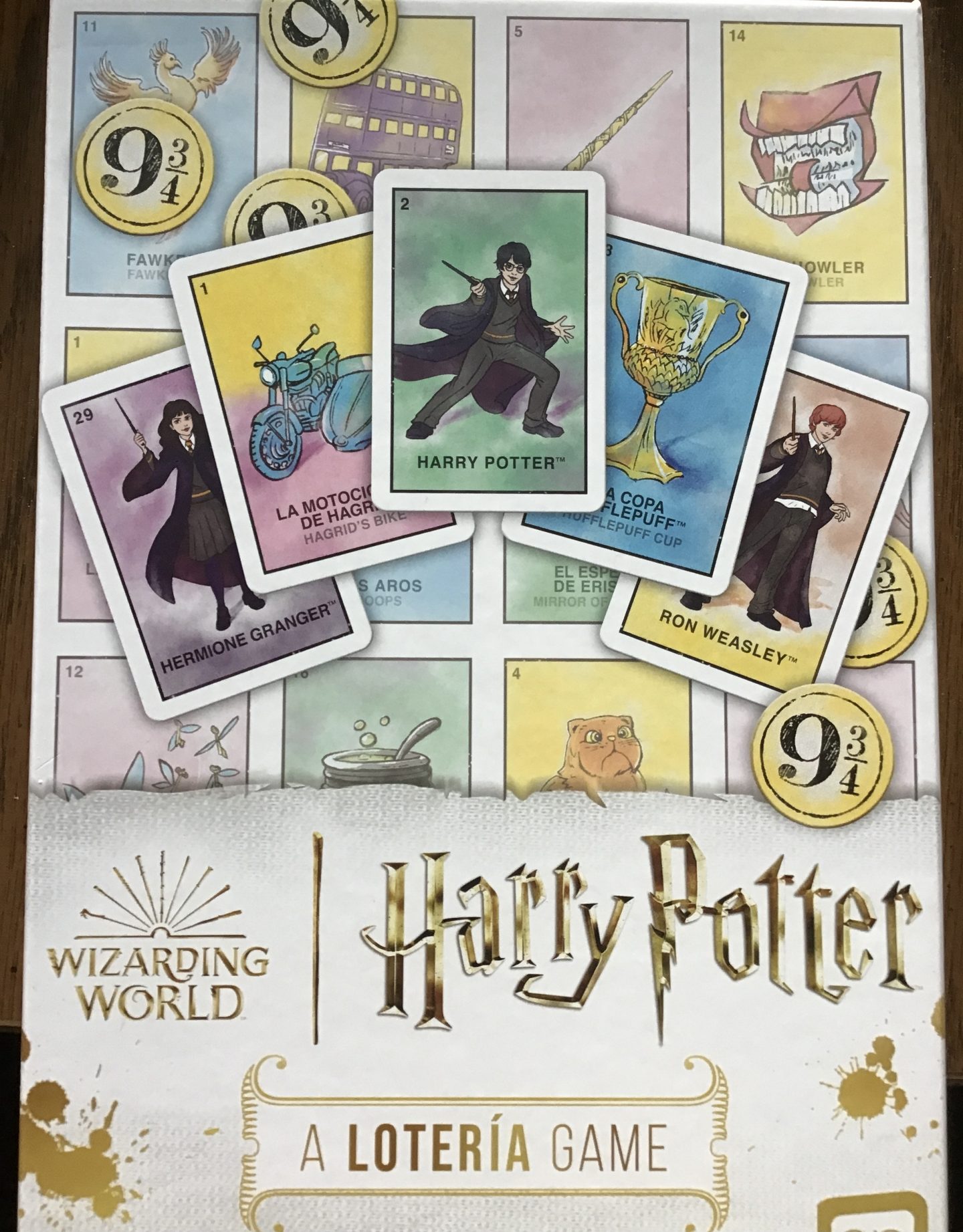 No. of Players: 2-12
Ages: 4+
Playing Time: 15 minutes.
Find more info HERE.
From the Publisher:
Explore the world of Harry Potter™ in an all-new way and claim victory with this magical version of Loteria, an English and Spanish version of the popular game of Bingo! Players win by matching images on their tablas with iconic characters, items, and places from the popular franchise, such as Hermione Granger™, Ron’s wand (La Varita de Ron), and Hagrid’s Hut (La Cabana de Hagrid) illustrated in traditional Loteria style. Alternative rules also allow players to call clues using their wizarding world knowledge! Prepare for luck and learning with this unpredictable and educational game for Harry Potter fans of all levels!
Disclaimer: The publisher provided the copy of  Harry Potter™ Lotería. The opinions expressed in the review are completely my own.

Loterería was a staple of my childhood experience, as I am sure it is for many others of Spanish-speaking descent.

My grandparents supplied me with my first Loterería experience when I was very young, and even years after they have passed away, I still have their own personal game set (almost a hundred years old!) on my shelf, where it has actually seen a lot of activity lately, as my three and seven year old children have been spending a lot of time playing it in their desire to have fun and learn Spanish while I am busy.

For the uninitiated, Loterería is more informally known as “Mexican Bingo”, as it roughly translates to a similar experience as traditional Bingo.

Each player takes a tabla or card that is filled with graphic pictures and their accompanying titular text in each squares within 4 rows and 4 columns (instead of using letters and numbers as in Bingo).

A deck of cards representing all of the possible pictures is shuffled, and each turn is spent with a dedicated person revealing cards in the deck and calling them out. If a card is represented on your table, you traditionally place a pinto bean on that space of your board until you get a winning combination, which can be 4-beans in a row vertically, horizontally, or diagonally, and in other variations other patterns (such as a 4 bean square) can be filled to achieve victory.

For those who are unfamiliar with Spanish, Loterería can be very educational, which is why I have frequently been using the game with my children lately.

As my wife and I both speak different non-English languages, there is virtually no reason for us to communicate with each other in Spanish, which unfortunately means that unless we really put an extra bit of effort into it, the children get little or no exposure to the other tongues.

Hence my reliance on games such as Loterería.

Now fortunately, when USAOPOLY / Wizarding World offered me a chance to try out their new Harry Potter Loterería, it came at the most opportune of times, as my seven year-old has recently been frantically devouring Harry Potter literature for her daily reading time.

In tying into multiple interests,  the Harry Potter rendition of this classic could prove to be a valuable tool in increasing my child’s Spanish comprehension, so I jumped on the opportunity as soon as it became available. 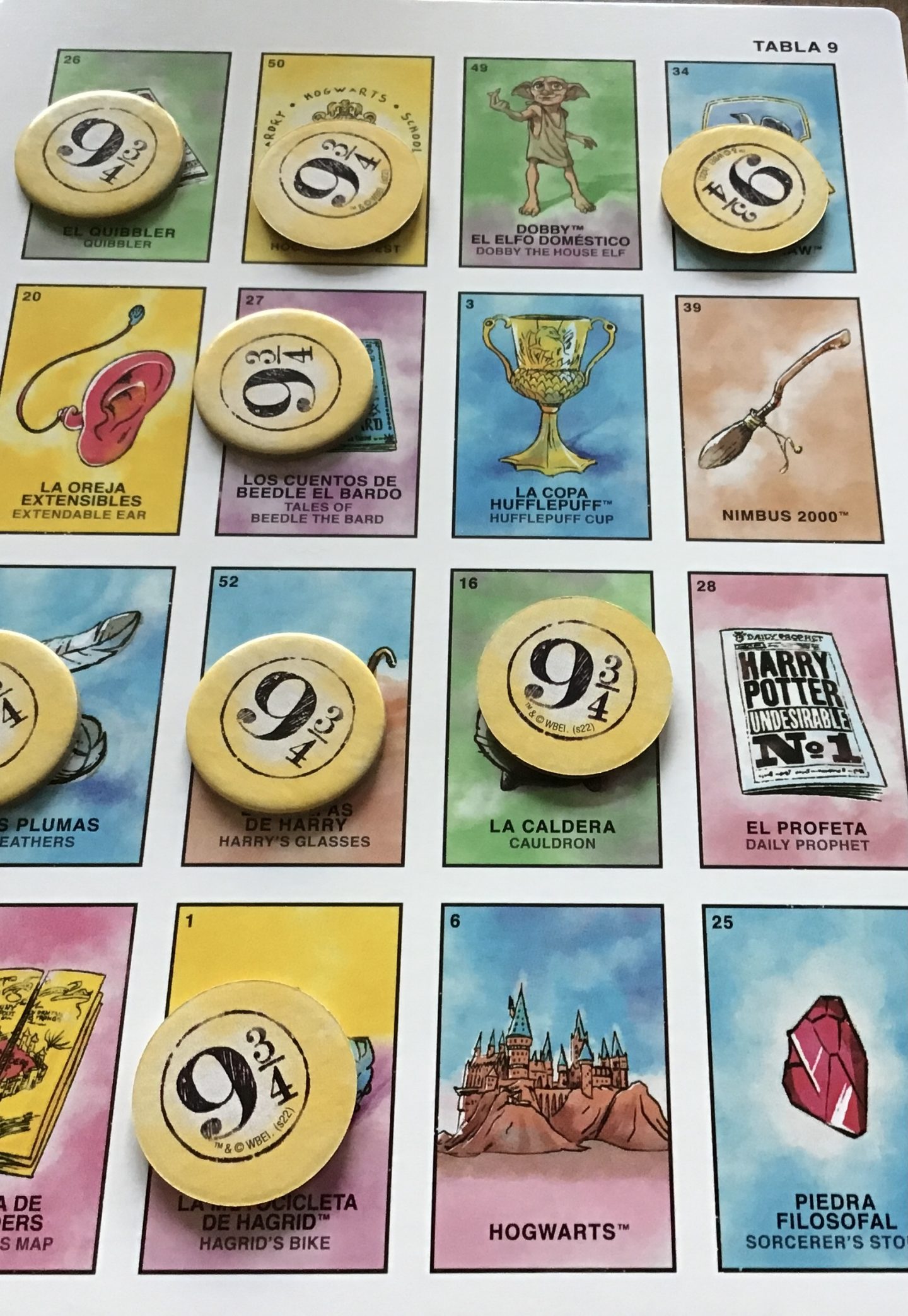 Now for the review :

Now unfortunately, I do need to say that from a quality standpoint, the production materials for the game are rather “normal” or “ordinary” for this day and age (with the cardboard tokens that are used instead of beans being the exception, which are of pretty good quality and makes clever use of the 9 and 3/4 coins from Harry Potter).

And I am not trying to say that the card-stock used for the cards is “bad” at all, but it certainly does not hold up in quality to my grandparents’ old set, which is much thicker.

Rather, it retains that durable-yet-flimsy level of durability, meaning that it should hold up fine unless made subject to abuse.

To further put things into better perspective, even the newer traditional Mexican Loterería sets that I have purchased have the same level of manufacturing, so again, this is nothing out of the ordinary for this day and age. It is what it is.

On the positive side of things , I will say that the game is just as captivating for my kids as traditional Loterería is. And it does indeed provide a good educational window, as projected, as there are new words to learn.

An added perk is that the subtext for each card presents them in both English and Spanish.

However, I do feel that in a certain sense, the Harry Potter variation of this game is also a missed opportunity.

Now I do realize that they need to maintain the theme of the set, and that is duly considered within the confines of this review—it would make little sense for example for the titular character of the series to be missing from the cards/tablas given this IS a Harry Potter set. 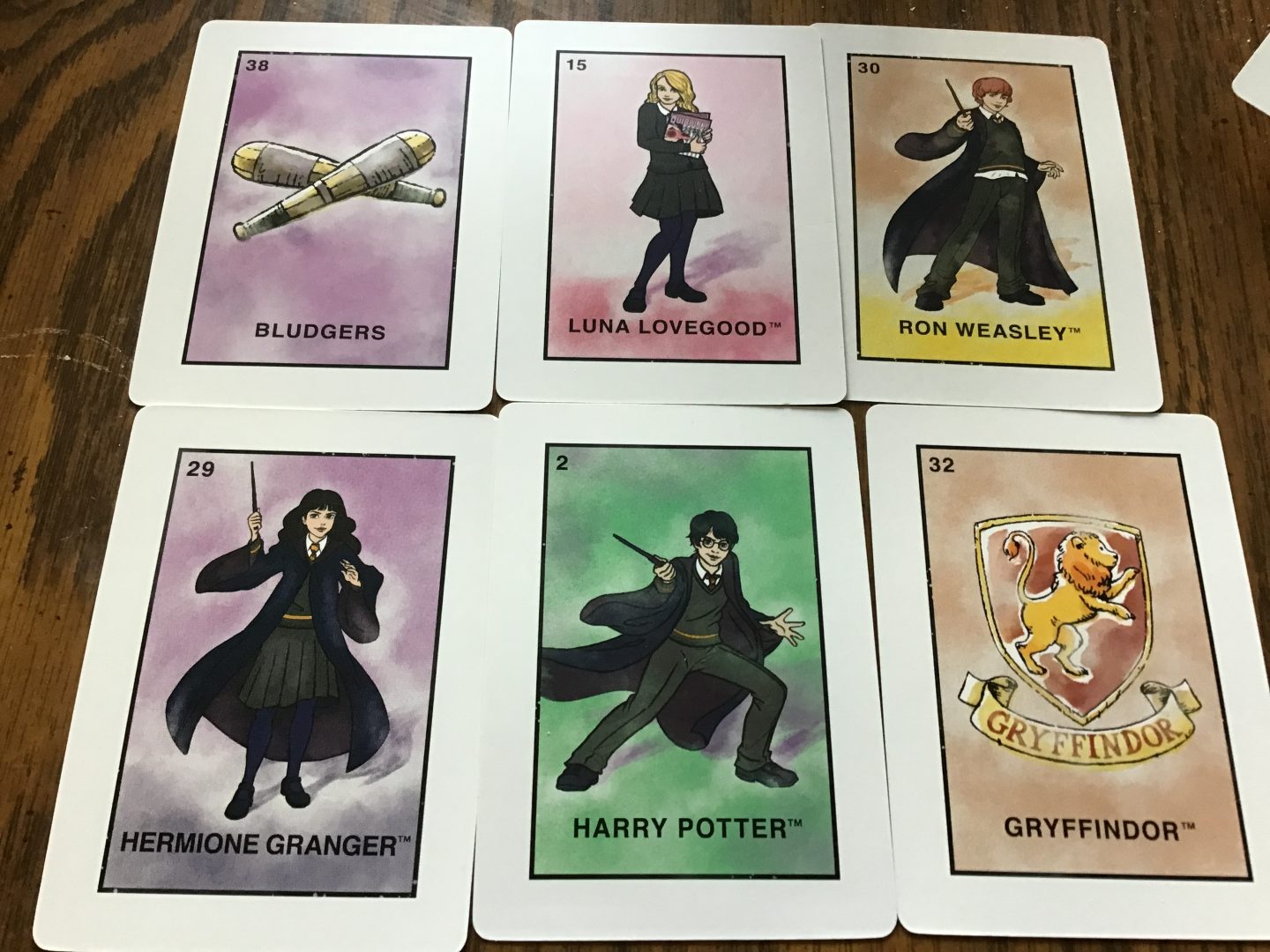 However, I do feel that too many of the cards that were selected for use in this game have no Spanish equivalent and therefore must be presented in English, which limits the capacity for learning in this game.

And within a certain, reasonable limitation, I think that this would have come off to me as being fine , but at some point I started to personally feel that a line had been crossed. A total of 16 out of the game’s 54 cards have an English-only name, as there is either no literal translation for some of the proper names (Ron Weasley will always be known as Ron Weasley, for example), or the card denotes something proprietary and unique to the Harry Potter universe that would again have no translation (such as “Nimbus 2000” or “Quaffle”). It is not enough to “break” the experience as I would call it, as it was a a very subtle observation, but nevertheless I did feel like the balance in pure Spanish cards could be improved. 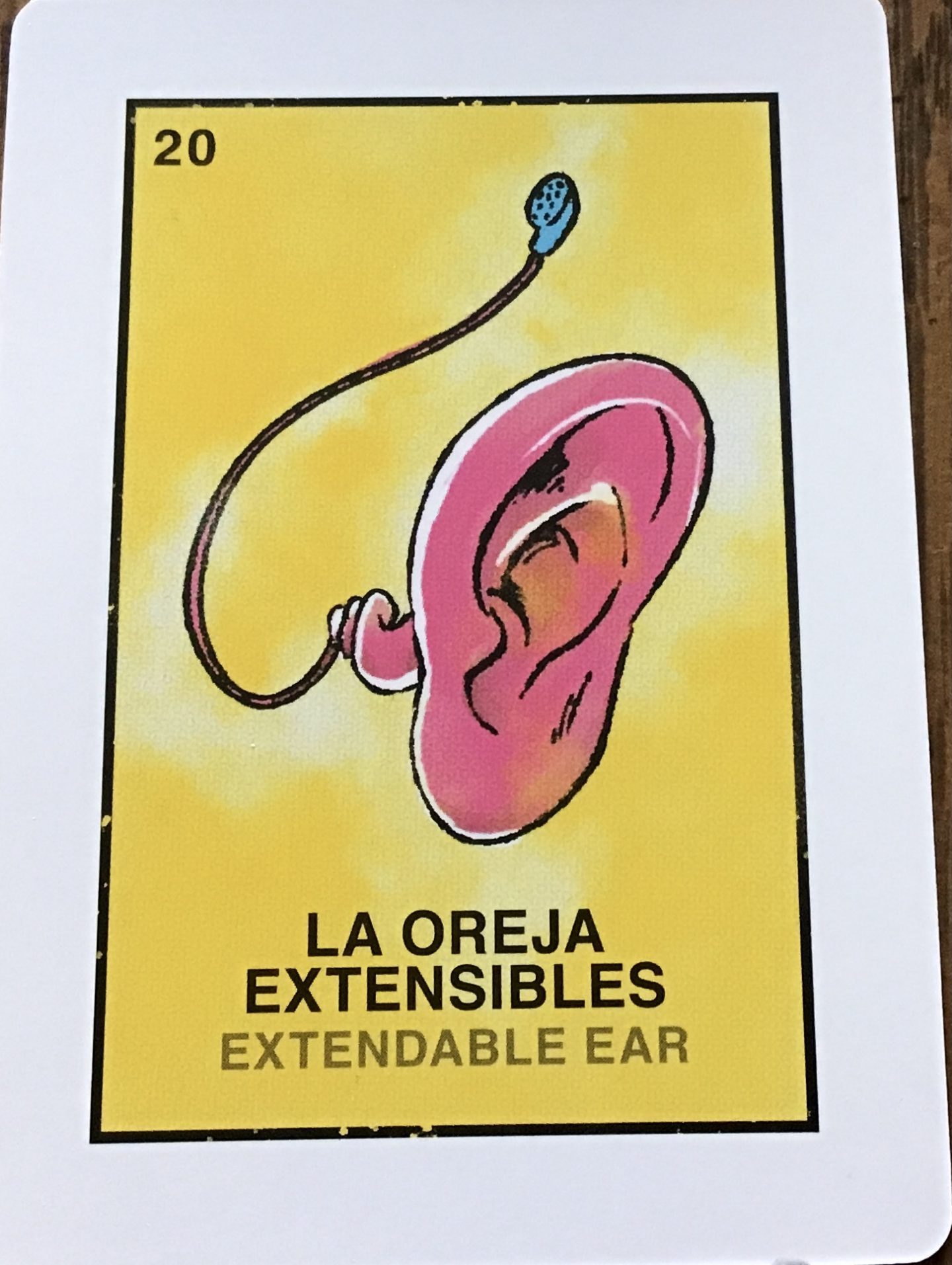 I also did encounter a couple of grammatical errors. I found one card that paired a Spanish definitive article directly in front of the English word presenting the word as Spanish, but using the Spanish word underneath and presenting it as the English word.  (This is for the crown card, which in this example says “La Diadem / Diadem”). I found another card that seemed a bit more of a Spanglish , utilizing “Marauders” as if it were the Spanish word rather than English (El Mapa De Marauders) , and another card seemed to have a mis-match with its use of a singular noun paired with a plural adjective (La Oreja Extensibles), and I do find it a bit on the sad side that these errors were overlooked. 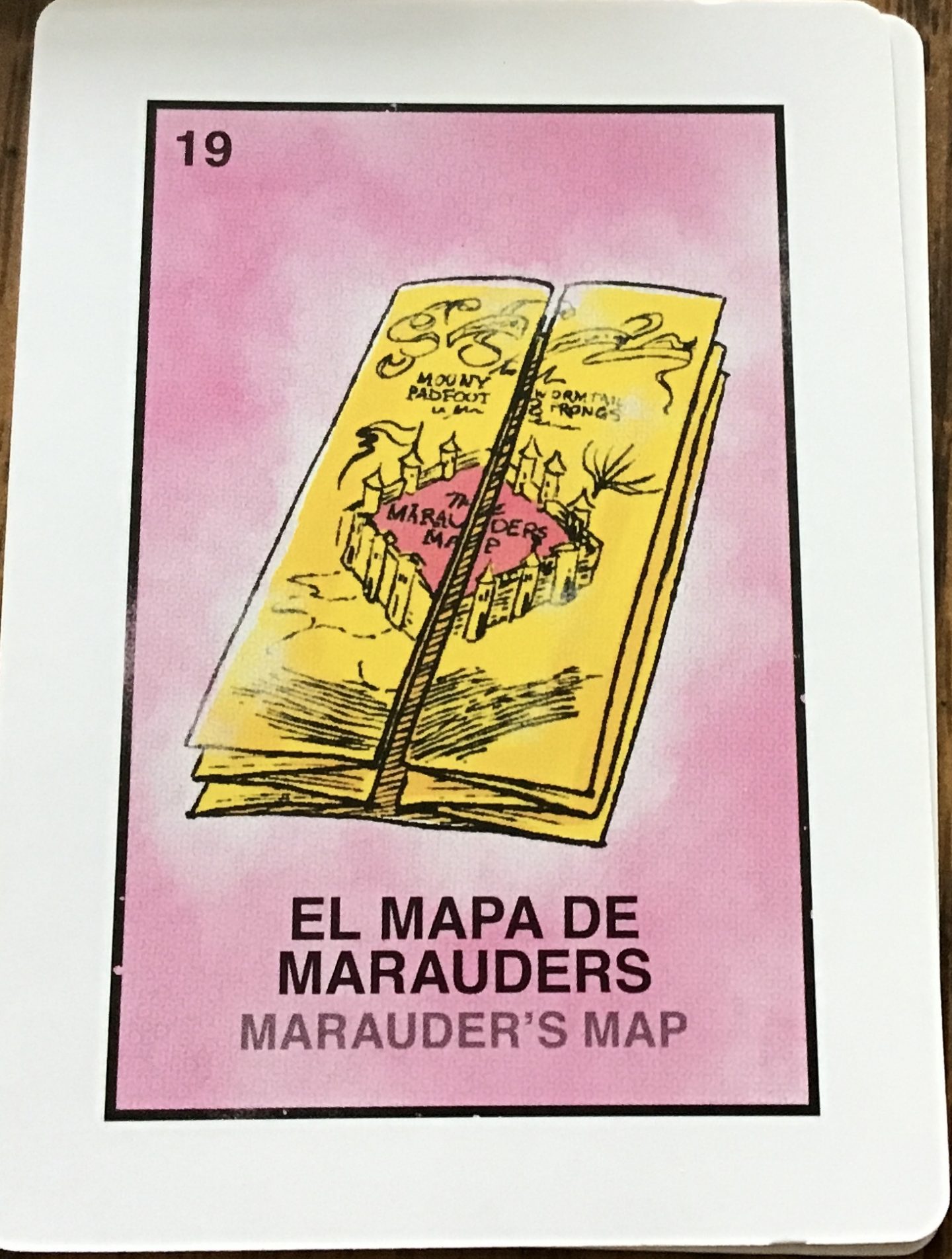 However, with this being said, that does not mean that the game did not provide a fun and educational experience—it certainly did, and still is.

On a last note, I know there are many others who would argue that  Loterería is not a game at all—the only choice that a player has is essentially what tabla you select at the beginning of the game. “There is no gameplay”, I might hear said.

On this level I will defend both traditional and Harry Potter Loterería. And perhaps the best form of defense I can think of comes from a 300 page fiction/fantasy book written by Karla Arena Valenti, appropriately titled and themed “Loterería”. And I would highly recommend this book for both adults and children, because it is a not only a great venture into culture, but also presents the game of Loterería as much more transcendental than most people would probably give it credit for being. 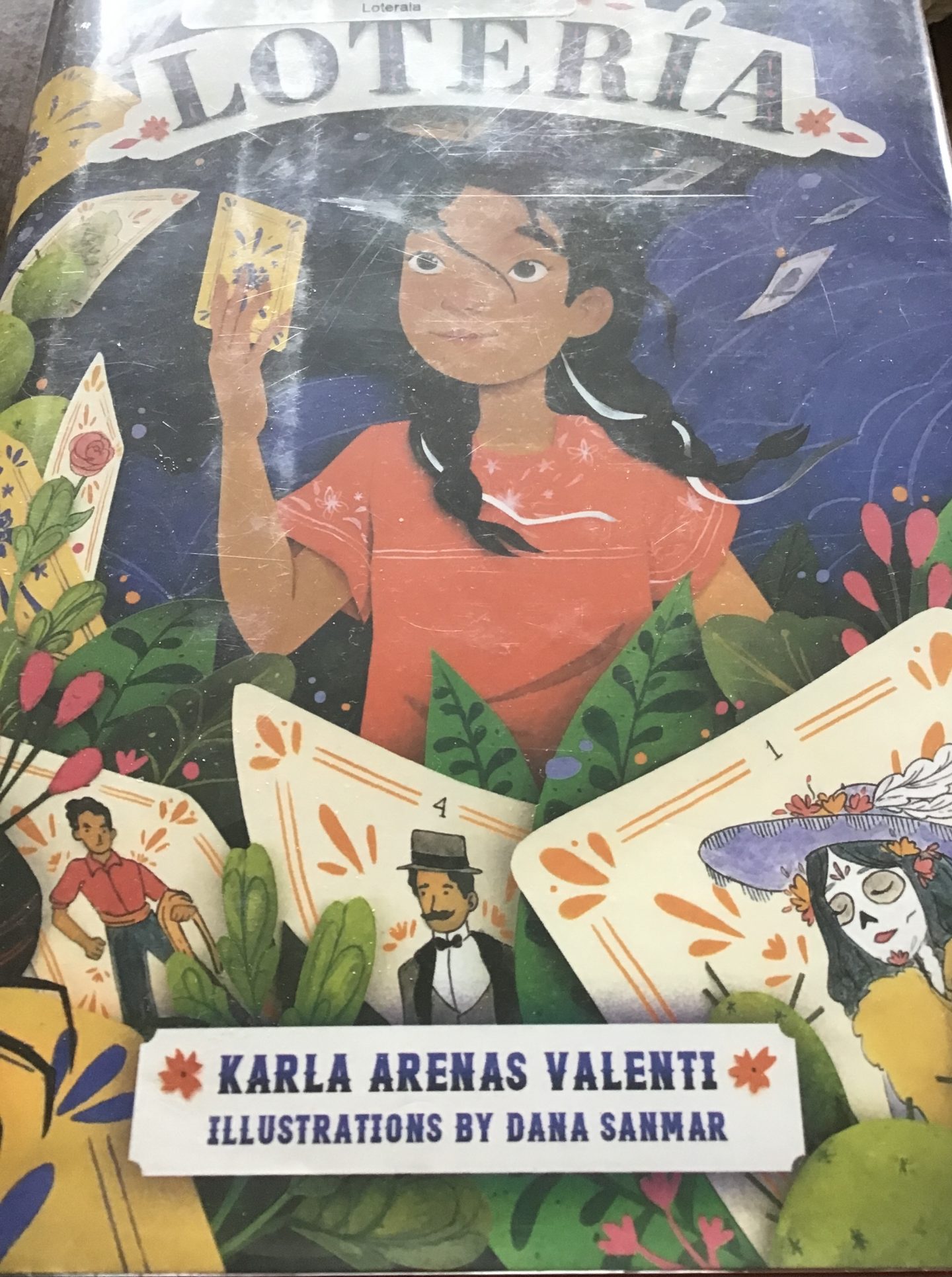 In reality, I must say that the game is indeed much more than the sum of its parts.

While some might say that your fate is sealed in a game of Loterería as soon as you shuffle the cards, the premise of the namesake book of Loterería revolves on recognizing our ability to cope with and respond to fate. For its intended age level (around 5th grade for most people I would suspect, though my second grader enjoyed and got a lot out of it, being a huge book worm), the book is quite philosophical and thought provoking. I highly recommend it!

Because in truth, the game of Loterería does transcend normal boundaries of experiences by being  a unique family bonding experience for millions of people from across many generations.

While not perfect, I proudly place Harry Potter Loterería within this niche.

Thank you to USAOPOLY for providing this opportunity for growth!

After reading Jazz’s review, if this sounds like a game for you at the time of this posting Harry Potter™ Lotería is available on TheOp.Games for only $19.99. ON SALE ON AMAZON for $15.93 currently!!
Check it out and get it HERE.
Find out more HERE.
Did you get it based on our review? Please comment below letting us know!

Check out Harry Potter™ Lotería and The Op Games on: