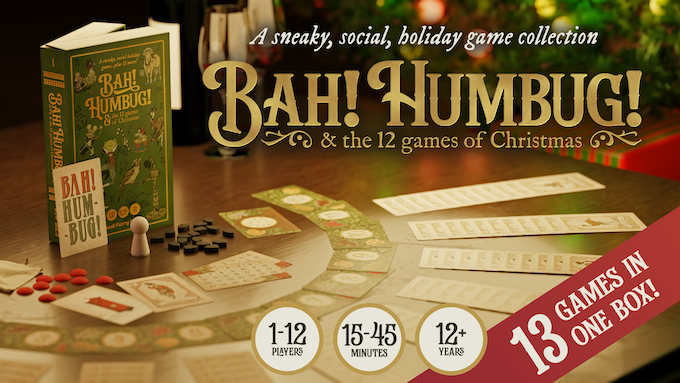 Mail your True Love one Christmas card each day—and be sure to boast to everyone else about it. In order to keep up with all the other suitors, you might have to lie about what you’ve sent. But lying is half the fun! Will you win by being the sneakiest liar, or by catching others in THEIR lies?

Bah! Humbug! is a bluffing and deduction card game that uses a special card deck based on the traditional “Twelve Days of Christmas” carol (12 x Drummers Drumming, 11 x Pipers Piping, etc.) plus a deck of 12 cards that form a circular wreath or calendar in the center of the table.

Each round, players are dealt a hand of Christmas cards. They then take turns secretly mailing 1 Christmas card to their True Love (playing a card face-down on the calendar). These cards are played in descending order, from 12 to 1. As each player boasts about what card they’ve sent, other players may shout, “Bah! Humbug!” to catch them in a lie. Lies that go unchallenged are awarded “coal” at the end of the round, while lies that are successfully caught earn the accuser 1 “holly berry” (or take away holly berries, if the accuser is wrong.)

Disclaimer: The publisher provided the prototype copy of  Bah Humbug: A Twelve Days of Christmas Bluffing Game. The opinions expressed in the review are completely my own. 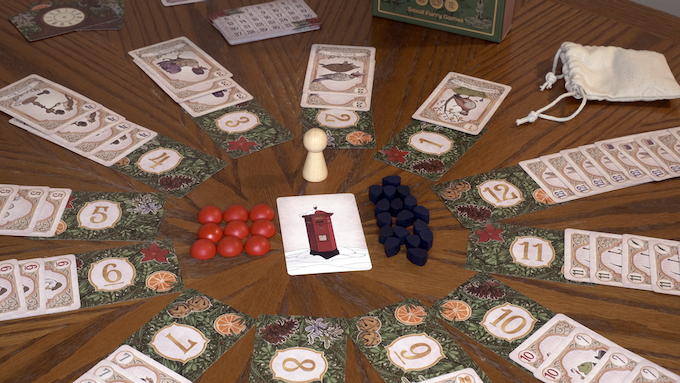 Overview:
Last year, I reviewed the print and play version of Bah Humbug. This year, they are doing a physical production run. I was asked to take a look at it again. So, I eagerly opened the box and was happy to not have to do any physical work to make the game this time!

The base game rules & setup remain the same as the print and play.

First, set the 12 wreath cards in the center of the playing area in the shape of a wreath. This should look like a clock when you are done. Set the Bah Humbug/Letterbox card in the center, letterbox side up. Shuffle the rest of the deck together and deal each player (the more the merrier) 8 cards (or 10 if you only have 2 players). Place the 17 coal tokens and 10 berry tokens in the center of the wreath as well. You will have to supply these yourself. Give the first player the designated first player token (once again you supply this), and you are ready to go.

The theme and mechanics remain the same as the print and play. 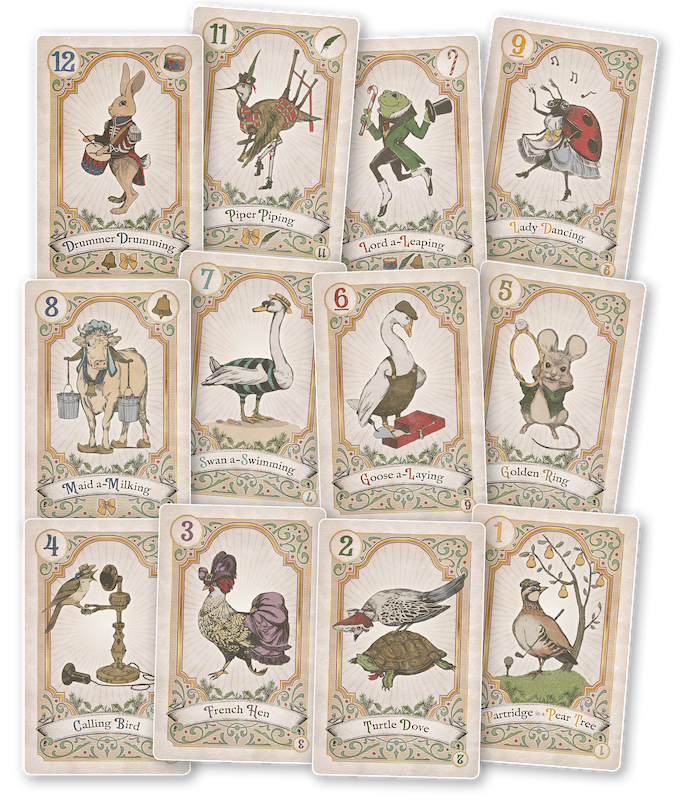 The theme of the game is that we are mailing our loved ones the presents from the famous song “The Twelve Days of Christmas.” As I said, this is my favorite Christmas song behind “Carol of the Bells.” Mechanically, this is a bluffing game. You either play the card required, or you lie about it. That’s right, you lie in Christmas game. I do believe there is another Christmas carol about Santa knowing if you have been bad or good. So… Anyway, the mechanic works well. The amount of cards equal to the day’s number are in the deck. One card shows the partridge in the pear tree, two have turtle doves, etc. The other aspect of the mechanic is card counting. Keeping track of how many of each card has been played. It is a fun deduction mechanic.

The gameplay remains the same as the print and play.

The first player will start by reciting, “On the 12th day of Christmas, my true love gave to me 12 drummers drumming.” Then, place a card facedown by the 12 of the wreath. Then pause, giving everyone a chance to decide if you actually played a 12 drummers drumming card or not. You don’t have to play the designated card for that day. As a matter of fact, you can win by lying and getting away with it more than the other players! We usually just asked, “Anyone doubt it?” If not, the next player moves to the next day and the next line of the song. Eleven pipers piping, ten lord a leaping, etc, until someone calls “Bah! Humbug!” That player would then flip the card in the middle of the wreath that side. The other way the round ends is if someone gets all the way to the Partridge in the pear tree card.

How do you know whether to call the bluff? Each day has that many cards in the deck. That means, there are 12 drummers drumming cards, but only 5 gold ring cards, and 1 partridge in the pear tree card. When each round ends, by either method, the cards used are picked up and placed on the bottom of the deck. Pay attention to what was played!

After resolving the “Bah Humbug,” or if you reach the 1, you resolve the cards played on the wreath one at a time. Flip the cards over, starting at the lowest value. If the matches, nothing happens. If it doesn’t match, place a coal token on it. Continue doing this until you reach the 12 or the postman. Again, more on him in a moment. If you uncover the postman card, STOP flipping over cards. The rest of the cards will not be revealed. Anyone that successfully lied gets to take a maximum of one coal token, no matter how many lies they told.

Finally, the postman. If he is revealed, he is treated as being the correct card. In the case of a “Bah Humbug”, a berry goes to the player that played him. Whether he is revealed, or you reach the 12, all played cards are shuffled and placed on the bottom of the draw pile. A new round is dealt, and the first player token moves to the left.

The artwork remains the same as the print and play. 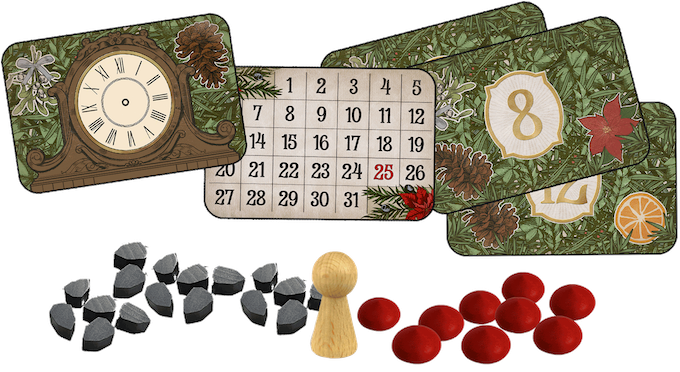 The artwork by Olha Bondarenko fits the theme very well. It feels like it came straight out of Charles Dicken’s A Christmas Carol world as imagined through the eyes of Arnold Lobel’s beloved Frog & Toad books. Each of the cards looks unique. My favorite depiction is the 9th day. I just like the nine ladybugs dancing. Honestly, though, all of them are amazingly drawn. This game just looks beautiful.

As for components, they are of course much better than the ones I used. The cards are nice and I would consider sleeving them. They are the key component to the game. There are additional cards that are used for some of the other 11 games. The berries are wooden red rounded tokens. The coal are black tokens that look like pieces of coal. These do heighten the feel of the game. There is also a natural wood colored first player pawn that is nicely oversized. They look and feel like they belong.

Bah! Humbug! looks beautiful when played out on your table. The game is quick and easy to learn and teach. It fits its theme perfectly. Mechanically, it is a solid filler game. There is a lot to love about Bah! Humbug!

I wish that there was a Bah Humbug card per player. Then, you could throw it down when you are calling a bluff. That would make it more fun!

My only gameplay complaint comes from the central idea. You are trying to lie in a Christmas game. If you are successful, you get a piece of coal. And that is a good thing! So, it is a little weird in that you are rewarded for being bad.

Bah Humbug the production copy is well made. The upgrade from my print and play is worth it. The additional 11 games utilizing the same cards with a few additions is quite enticing. I can’t wait to see what the other games have to offer. Some are solo play, some are 2-player, and some offer player counts up to 12 people!

Bluffing, fast filler games, getting coal for Christmas (but in a good way?)

After reading Adam’s review, if this sounds like a game for you at the time of this posting Bah Humbug: A Twelve Days of Christmas Bluffing Game will be live on KICKSTARTER for 3 more days!!! until Tue, January 3 2023 8:59 AM PST, and has surpassed it’s funding goal of $5,075. Check it out and back it HERE.
Find out more at BGG.
Did you back it based on our review? Please comment below letting us know!

Check out  Bah Humbug: A Twelve Days of Christmas Bluffing Game and  Small Furry Games on: