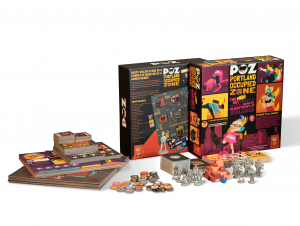 Portland Occupied Zone (POZ) is a semi-cooperative board game where you and up to seven other players roleplay as slacker activists trying to bring about Revolution in Portland’s fantasy Hawthorne District.

The objective is to transform your neighborhood from a late-stage capitalist hellscape into a slacker Marxist utopia.

The patriarchy must fall.

The current tenants must go.

By Any Means Necessary.

This time we mean it.

Our time is now.

There are 8 different playable characters, each with their own abilities and styles of play. 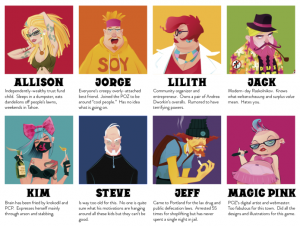 We commissioned Dan Kelly to sculpt the game pieces for POZ.  Characters are all different heights (just like in real life) but generally somewhere around 38mm. 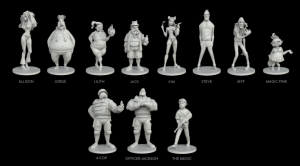 A Really Big Board

Not the biggest ever, but still pretty big.  The Fantasy Hawthorne District map is 90cm to a side and is home to 8 local businesses—all fully destructible. 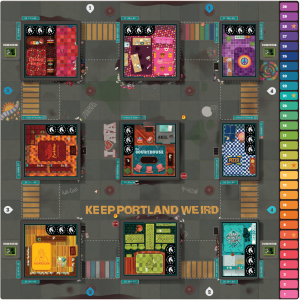 There’s a vintage clothing store, a design studio, a cannabis dispensary, a pizza parlor, a tattoo parlor, an absinthe distillery, a bookstore, and a food co-op—all extremely flammable and busting with lootable junk.

All of this is only temporary though.  It will be YOUR job to burn all this down and replace it with a system that actually works—the Portland Occupied Zone.

The POZ has everything the People truly need.  Flop tents, “farms,” a drum circle, barricades for resisting the police, a ball pit, and a place to dump your used needles.

The more passionately you wage revolution the more penniless hippies and homeless drifters will move into your community, increasing its size and power. 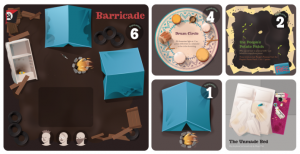 Way Too Many Cards

If you thought Virtue Signal had too many cards, you ain’t seen nothin’ yet.  POZ has 378 cards, split across 14 different decks.

There are over 200 different items, most of which can be looted from Portland’s 8 local businesses.  The type of loot is unique to the location: i.e. the food co-op (mostly) has food, the bookstore (mostly) has books, the dispensary has (mostly) drugs, and the Pizza parlor has… weird stuff. 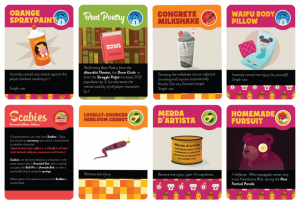 Narratives are events beyond your control, but Aktions are decisions that must be voted on by the POZ’s Revolutionary Council (the players). 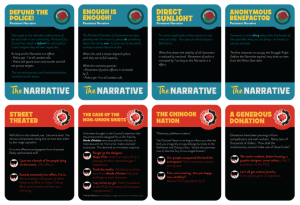 Your Personal Goals are secret, and are the single fastest way to increase your score.

Sure but how does it work?

The game is turn-based.  At the beginning of every round new Narratives and Aktions are drawn and voted on, and the police and the Medic will take their turns.

There are no discreet game stages, but the early game will likely be focused mainly on looting and burning, which builds up your characters and the POZ.  The Police are quite tough, and players are unlikely to be able to defeat them early on.

When space for building has been cleared out and players have amassed a large enough arsenal, it will be time to bring the fight to the Man.  The police work on a simple AI (similar to Space Hulk).   They will be relatively passive early on but their aggressiveness will increase as the POZ grows.

POZ is semi-cooperative, and there are two conditions for winning:

a) The POZ must be built up, the police must be defeated, and the courthouse must be occupied.  This is a group effort which benefits all players.

b) Once the courthouse is occupied, however, only the player with the highest score is the winner.

These two goals are fundamentally at odds, and encourage players to double-cross one another.  Just like in real life.  Rather than designate one player as “the betrayer” it’s assumed that everyone is, all the time.

In order to make ever more biting and relevant satire, the POZ team has done extensive research into many eclectic radical movements including Antifa, Occupy and C.H.U.N.K. 666, and we think we did a good job spoofing on their peculiar cultures and modes of social organization.

Human megaphone, down-twinkles, decision by consensus—it’s all in here and will be covered in excruciating detail in the game events and in the manual.

What do you think, sirs?

Here’s what will be in the Box*