Number of Players: 3-5
Ages: 15+
Time: 10-15 minutes.
Find on KICKSTARTER HERE.
See what our reviewer Adam had to say about Hyperwars: a fast paced cyberpunk board game
Pledge Below!

Hyperwars is a fast-paced area control cyberpunk board game for 2-5 players that can be played in 10-15 minutes. Playing as a corporation in the chaotic city of Urbana, players will fight for the control of the market of illicit goods. The game has 5 levels of difficulty with increasing strategic options that will give you an adrenaline rush. And the game is absolutely ready for production after more than 200 hours of playtests with 500+ players. 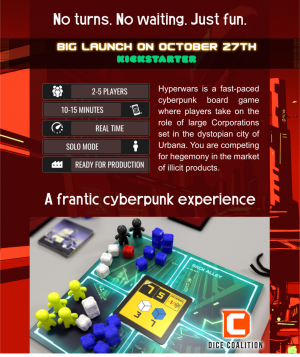 Hyperwars: a fast paced cyberpunk board game will be launching on KICKSTARTER on Thur, October 27th 2022
Pledge Below!

Find out more at BGG.
See what Adam had to say about Hyperwars: a fast paced cyberpunk board game
Want our most important news delivered to your inbox at least twice a week????? Just fill out the following and submit. It’s that EASY!
Never Miss Everything Board Game posts again! Get them in your inbox: