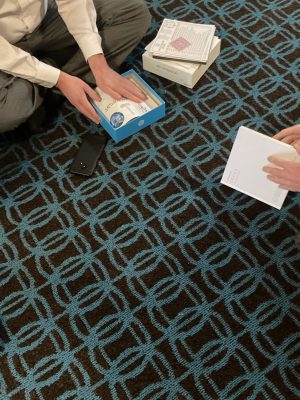 Anthromancer is a tabletop game system that features a suite of original neoclassical strategy and chance games, as well as an original oracle. It is primarily organized around a 2-4 player abstract strategy game called ‘Mercenarium’.

In Mercenarium, players take turns placing and moving cards with various edge values in an attempt to overcome the edge values of opposing cards and capture them. The first player to capture 5 cards wins. Captures can be spent to gain control of enemy cards which pivot to the orientation of the buyer, changing the relative strengths on the battlefield and subverting enemy plans. In addition, each player is dealt 1 of 15 unique ‘hymn’ cards, which grant powerful abilities that dramatically alter the board state.

The game feels a bit like chess, but with far less predictability, due to the randomness of the deck and the asymmetrical powers of the hymns. Skill is gained by learning to predict patterns of movement, and being willing to take risks.

Disclaimer: The publisher provided the copy of Anthromancer. The opinions expressed in the review are completely my own. 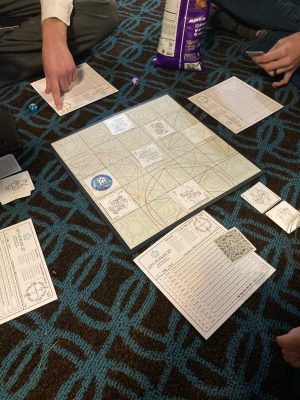 This game is incredibly fun.  We received the box to review and were initially daunted by the hard cover 150+ page rulebook.  However the base game is playable with just the first 20 pages and the rest adds variants, lore, other games, and cool illustrations. It is definitely a lot more in the box than we expected, but well worth the time to check it out.

For the base game, you start with 5 cards and a spell.  The cards, like face cards, have 4 suits and a range of power values, but each side has a number of dots where larger numbers beat smaller numbers.  If the dot numbers tie then the suit tells you what happens.  They either capture, destroy each other, get captured, or cannot attack each other.  On top of that, most of the strongest cards are mercenaries that can be changed to your side rotating to serve you and revealing different sides of power than they had.  First player to 5 captures or to block all opposing summon spots and kill the last cards wins.

It is complicated in 2 player and mastermind level strategy in 4 player.  We were playing with teens, adults, and a mix in between and every game scratched the simple to learn difficult to master itch.

10/10 as a stand alone game and with bonus material to boot.

We would happily stock this in our store and recommend it to anyone looking for a 2-4 player strategy game.

Every player for the review loved it whether they were winning or losing and even people that looked fully shut out made astounding comebacks.

If strategy games are your jam, I definitely recommend this game.  Play it, love it, learn it :). 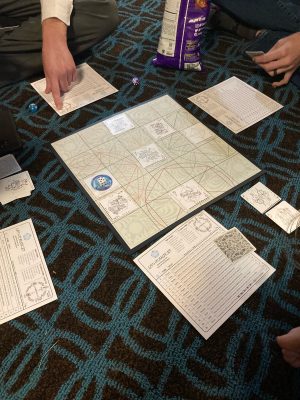 After reading The Arcanist’s Armory LLC’s review, if this sounds like a game for you at the time of this posting Anthromancer is available for purchase and currently on sale for only $49.99. Check it out and get it HERE.
Find out more at BGG.
Did you back it based on our review? Please comment below letting us know!