Publisher: Pine Box Entertainment
Designer: There was a large team involved in this title, check their BGG stats.
Number of Players: 2-4
Ages: 12+
Time: 20-80 minutes.
Find on KICKSTARTER HERE.
Pledge Below!

7th Sea: City of Five Sails Expandable Card Game is An evolving tabletop card game set in the 7th Sea world of swashbuckling and intrigue, exploration and adventure, for 2-4 players 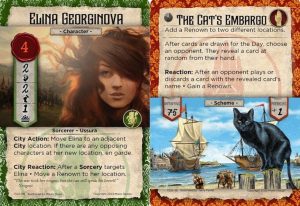 City of Five Sails is an expandable card game set in the swashbuckling world of Chaosium’s 7th Sea roleplaying game by John Wick. Players control one of five factions as they fight to influence, control, and explore the independent and unruly city of Five Sails. Primarily designed for two players, multiplayer allows for up to four players.