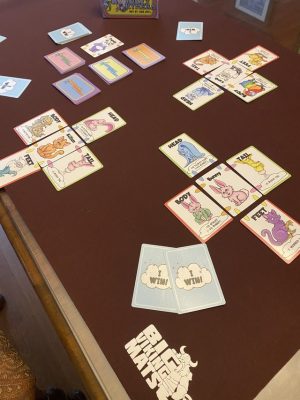 Play cards from your hand to create the cutest animal for yourself and leave your opponents with a hideous monster! Modifier cards rule, like a rainbow tail for bonus points to you or scaly skin to an opponent for negative points. Appropriate for all ages.

Disclaimer: The publisher provided the copy of Kuddly Kymera. The opinions expressed in the review are completely my own. 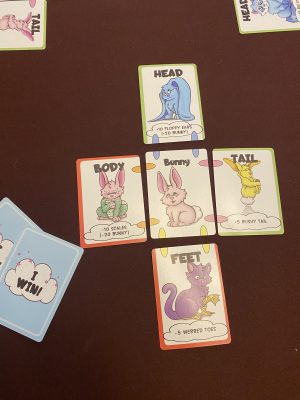 While at the local convention, Mythica Gaming had a booth. I stopped by, talked with one of the owners, and left with a bag full of games. Kuddly Kymera drew me in for various reasons: short play time, low cost, and low age requirement. I talked with the designer, Jimmy, about whether it would be playable by younger than 5 year olds. He said yes. So, I took it. I am always on the look out for games that can be played with The Daughter.

Simple set up and rules help this game be approachable by the youngsters. Separate the cards according to their backs. Deal each player a one of each color. Flip the green backed character card face up for all to see, Keep the other four secret. Set up now complete.

The youngest player goes first. The active player selects a card to play either on their character card or an opponents’ character. The only rules governing this play is that the card played must be matched to the corresponding colored spots on the character card. Hint: these colors are on the edge of the cards, and also are the color of the back of the card. The other rule, only one type of each card may be played on a single character card. This means that after a “Feet” card is played on a character, another “Feet” card cannot be played on this character. 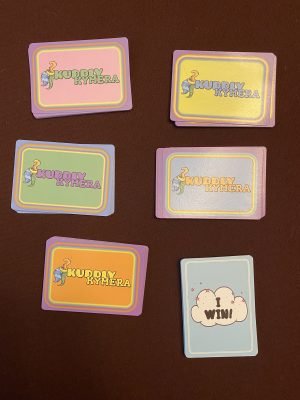 The rulebook explains what a Chimera is: a Greek mythological fire-breathing she-monster with a lion’s head, goat’s body, and serpent’s tail. For the purpose of this game, it is an animal made up of mismatched parts of other animals. The cutest Kymera wins!

Mechanically, the game is simple. What else would you expect from a game that is aimed at all ages? You play a body part card on a character card, then play passes to the left.

The gameplay does feature some strategy. The body part cards feature either a green border or red border. Green adds points to the cuteness of the animal (some add bonus points if added to a certain animal). Red subtracts points from the cuteness of the animal (additional negative points if added to certain animals). So, try to play your green cards onto yourself and red cards on your opponents’. Yet, this could bite you . You could wait it out and force someone to play their “Body” card on your animal, and it could give you 20 bonus points!

After all the animals are complete, simply add up the values of the parts, and the cutest animal wins. And, yes, this could be the least ugly. One game ended up -5 v 0 v 0. I scored the -5. The kids tied at 0. This meant that they each receive an “I win” card. The first player to receive three “I win” cards is crowned the winner!

The components are all cards; 74 cards to be exact. They are standard quality and will stand up to some repeated plays. 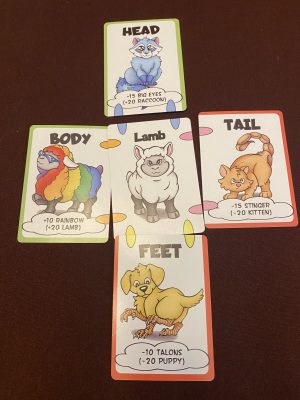 However, the artwork by Lisa Sell is fantastic. It fits the theme well, is cute, and my kids loved it more than me! The puppy with talon feet and kitten with a scorpion tail, while both worth negative points, were some of the favorite cards in the deck.

Wow! Kuddly Kymera offers a lot of good. It is easy to teach, even to a 3 year old. It is fast to play. It is fast to reset between rounds. And it is just so darn CUTE!

If I had to come up with something I would change, it would be the box. It is oversized. The rulebook is the reason for this. Just make the rules cards, and go to a tuck box. The smaller footprint of the box means I have more space to buy more great games like Kuddly Kymera. Or, that I won’t need to buy another shelf anytime soon.

Kuddly Kymera sells for $14.99 right off the Mythica Gaming website. If you have children, this game should be on your shelf, and not your shelf of shame. My 3 year old and 10 year old loved playing it. I mean, so did I, but I also enjoyed watching them enjoy it. Kuddly Kymera truly is a family friendly game. Picking it up at the convention was a good decision!

After reading Adam’s review, if this sounds like a game for you at the time of this posting Kuddly Kymera is available for purchase at MythicaGaming for only $14.99. Check it out and pick up your copy HERE.
Find out more at BGG.
Did you Get it based on our review? Please comment below letting us know!

Check out Kuddly Kymera and Mythica Gaming on: