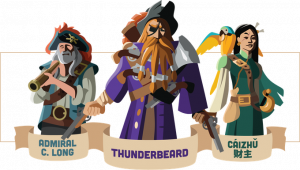 We TOTALLY get it – the only thing stopping you from launching your pirate career today is storage space for all those cannonballs and, of course, those long months away from shore. (That, and maybe scurvy, too…)

Well, excuses begone – it’s time to give your career a peg leg up today! ANNOUNCING: Guns or Treasure, a speedy game of buccaneering and bluffing that delivers big pirate adventures in a small box. Easily learned in 3 minutes and played in 15, Guns or Treasure is a perfectly portable game, great at family hang-outs, over cold drinks with friends, or as an ice-breaker at this week’s game night… with minimal cargo space required! 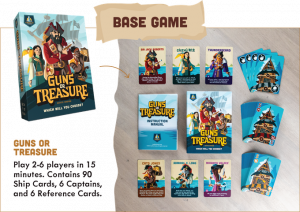 Guns or Treasure puts you in the boots of one of six colorful Captains, each equipped with special abilities, as
you construct a powerful new pirate armada. Build wisely – what you decide to bring aboard just might mean
the difference between besting a rival’s fleet or ending up at the bottom of the sea. Will you stuff your hold
with as much Treasure as you can, hoping to escape each encounter with as much loot as possible? Or will you
load your ships with Guns to fend off any oncoming opponents with booming broadsides? Whatever you
choose, always beware – there’s no telling if your rival has stowed a Bomb aboard their ship that might sink you
both!
Guns or Treasure is now LIVE on Kickstarter – back us today at whatever level fits you and receive special backer
rewards! 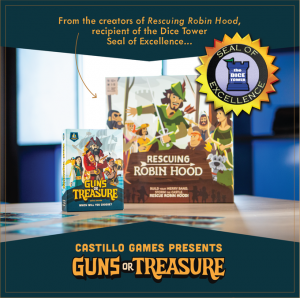