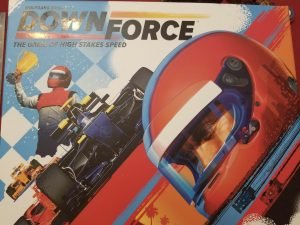 High-stakes bidding on million-dollar race cars. Frantic bets placed in secret even as the cars race around the track. And to the victor, the biggest purse of all. But in the world of motor racing, the margin between victory and defeat can be a single moment: a steep banked turn, tires screaming and spitting out smoke, and the downforce, pressing you down in your seat and keeping you on the track as you make your move inside to pull ahead.

Downforce is a card-driven bidding, racing, and betting game for 2-6 players based on Top Race, the award-winning design by the legendary Wolfgang Kramer. Players first bid to own the six cars in the race, then they play cards from their hand to speed them around the track. However, most cards will also move their opponents’ cars. So figuring out just the right time to play a card is the key to victory. Along the way, players make secret bets on who they think will win the race. Whoever has the most money from their prize money, winning bets, and remaining bank wins.

This is a game whose design needed no attention. Years of play and multiple versions have honed it to near perfection. On the contrary, one of the design challenges was figuring which of the many rules modules to incorporate to create the most fun version. Downforce also adds variable player powers to improve replayability. But mostly, it improves the look of the game to make it gorgeous and easy to play. Special attention was paid to the colors, the layout of the cards, the design of the cars, the details on the board, and more. 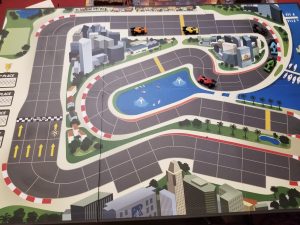 Downforce holds a very special place in my game collection.

Whenever I have guests over and need something to do, it is my main gateway game.

While others may choose Ticket to Ride (which served as my own reintroduction to games many years ago) or Settlers of Catan, I am always one to go against the trends and swim against the current.

As such, I wanted to find something that perhaps would not come up as often when naming names, both because I like showing off good games, but also giving attention to games that might not be as well known with as large of a retail presence as some of the other big names.

Downforce as a game has quite a long history that dates back more than 40 years! Although it has sported a few other names under several incarnations and variations, this marvel that was originally designed by Wolfgang Kramer has shown that simplicity in design can be more than enough to help ensure that a game survives the test of time.

Restoration games has revamped the game engine to bring it blazing into the world of modern gaming with fantastic aesthetics and components, and rather than feel like a relic of the past, it feels like it rightly belongs in this day and age. 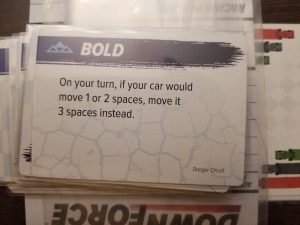 The reason why I find it to be the perfect game for bringing newcomers into the hobby of gaming has a lot to do with the nature of its mechanics.

It feels like it is a hybrid of several games that most people have fond childhood memories of. Did you ever play Uno? How about games where you move pieces around a circular board, like Monopoly, Sorry, etc ?

Most people would probably nod their heads yes and acknowledge that we all grew up with similar gaming experiences.

Consequently , Downforce does not feel like a totally unfamiliar experience when you bring it out to show to friends who aren’t gaming enthusiasts.

It tickles a memory, and is the easiest game to get into. But at the same time, it takes those familiar elements that we grew up with and integrates them into something totally new.

Do you remember that old feeling of slapping a draw 4 card onto your rival siblings in Uno? That feeling is there! Or trying to be the first person to land on a certain space in Monopoly and laugh in a certain someone’s face? That is there, too!

Do you like to gamble and rekindle your memories of playing poker with friends? That will be there as well!

Players take on the role of both race car owners and high stakes gamblers in a seemingly odd combination of roles, but as confusing as this hybridization of roles may sound, it works perfectly. 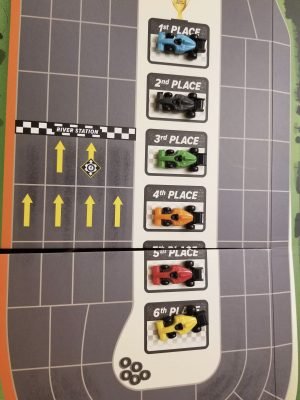 Players will start by spending money to buy cars. You may even buy more than one car (taking turns doing so), but there’s a catch—you have to deduct the amount of money you spend buying cars from your net income at the end of the game, so if you are not careful, you can end up with a negative balance at the conclusion of the big race! It may just be better to buy one car…or maybe not!

You often bid and compete for starting position and something called Power Cards, which provide each colored car / driver with a unique ability that can help clog up your opponents’s plans. These usually include bonus moves you can pull off under special circumstances (such as moving a number of spaces in a straight line, ending normal movement with a car behind you, etc).

Each driver also receives a card with the highest movement value possible, 8. This is a trump card used to jet ahead when in a pinch.

For each turn a player takes, they get to play a card, like Uno.

As such, players are dealt an equal number of differing cards that have various pictures of the colored cars used in the game along with  different movement values.

For example, you may see a card with :

This essentially means that when a player plays this card, they get to move the red car forward or diagonally forward by 5 spaces, the green car 4 spaces, and the blue card 2 spaces.

There are also “Wild Car” designations that let you move any car you want to by the depicted amount.

There are 3 checkpoints marked on the game board. Whenever the first car crosses one of these checkpoints, players will use the provided sheets to place bets on the color of car they think will win the game.

If your guess is correct, you win bonus money at the end of the game—or your guess comes in second, third, fourth place, etc, you win lesser monetary compensation.

So all in all, you will have at least 3 attempts to rake in the cash when cars start to cross the checkered flag.

An of course, if you own the car that comes in first place, you also score the big cash, again , with lower placing receiving less of a reward.

You then take your total winnings and subtract the money you spent on cars to see how much money you ended up with. The winner is, of course , the person who had the most money at the end of the game.

Simple. So simple in fact that an adult could easily consider it to be a childish sort of game.

But the end result of using the clever card and gambling combination is that of frantic fun.

It is thrilling to use your 8 card to power ahead into a narrow section of track and make it so that opponents waste valuable movement cards since they cannot go through you! They are just stuck behind you until your card is moved out of the way. 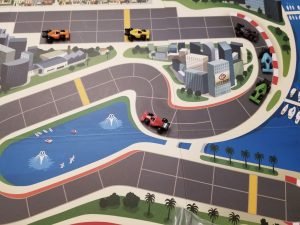 Or manipulating the events of the game through careful use of cards to ensure that you optimize your movements thru the use of power cards. Or better yet, you can even win by betting on opponents cars if crafty enough!

All in all, this game gets an A+ for me. It plays quickly , does not drag with extended playing times (remarkable since it can support up to 6 players!) but is good enough to play multiple times in a row if people so desire.

It really doesn’t need any improvement—I could easily live without the Downforce expansions (which I also own and will review another time when able), but if you are looking for something that isn’t the usual fare for introducing non-gamers to the field of board gaming, I highly suggest and recommend Downforce. Best of all, both kids and adults can have a blast with the ingeniously simple yet elegant system that is employed.  If I could only have one desert island game to use to bring people into the hobby, this would be it!

After reading Jazz’s review, if this sounds like a game for you at the time of this posting Downforce is available for purchase for only $40. Check it out and get it HERE.
Find out more at BGG.
Did you get it based on our review? Please comment below letting us know!

Check out Downforce and Restoration Games on: