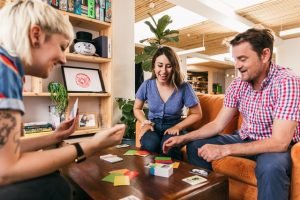 4 Amazing Board Games Based on Books

Board games based on books are the best of both worlds — mainly because of their immersive narratives and exciting game design. Howard Pyle’s ‘The Merry Adventures of Robin Hood of Great Renown in Nottinghamshire,’ for instance, tells the adventures of the skilled archer of the same name who steals to give to the poor. Rescuing Robin Hood, a deck-builder game that’s based on the famous tale, exemplified readers’ admiration for the vigilante by letting them play as his rescuers, making it all that more exciting to play.

There are tons of bookish board games that are similar to this, but we’ll introduce you to some of the best ones.

Lord of the Rings – The Confrontation

First on the list is a treat for Tolkien fans. Lord of the Rings – The Confrontation is a strategy game loosely adapted from the high-fantasy epic written by J.R.R. Tolkien. Players win by either getting Frodo into Mordor or — for the other player — three of Sauron’s people in the Shire or Frodo’s death. Focusing on the battle between the Fellowship and Sauron, The Confrontation mainly lifts its story from The Fellowship of the Ring, the first book of the series, which follows Frodo’s adventures to Mount Doom. This is the only place where he can destroy the ring, and destroying the object is the only way to prevent the evil Sauron from gaining back his powers.

The Confrontation, though, is not for fans alone. Renowned game designer Reinger Knizia worked the concept of ‘Stratego’ into the game design. Stratego is very similar to dark chess, so it’s more strategic. The players don’t know what the other’s army fully looks like and players have to play without knowing which characters are in an area. This is one of the most thrilling aspects of The Confrontation that anyone who loves strategy can look forward to.

The ‘Hunt a Killer’ mystery murder concept combined with the high-spirited sleuthing of Nancy Drew makes an ideal combo for the mystery lover. In Mystery at Magnolia Gardens, the player takes the role of Drew’s assistant who has to find the culprit behind the death of the botanical garden’s director.

Even though the board game is not based on any particular Nancy Drew book, there is a lot to look forward to. This is because its game’s designer, K.C. Chaney, made sure to incorporate the board game’s tone on the original book franchise while keeping it fun and interactive. Players can interact with the case material because the box includes character profiles, notes, and object clues designed like props in a mystery film, making it a truly immersive experience.

Dune the board game, as its name suggests, is based on Frank Herbert’s 1965 sci-fi series of the same name. The highly imaginative epic is set in the fictional interplanetary society of the year 10,191, where the Atreides faction had begun the conquest of the desert planet Arrakis, but was quickly met with conflict from the Harkonnen faction.

The board game starts the same way. And as leaders of their chosen houses, players have to choose between Atreides and Harkonnen and use a variety of action cards to seize control over the spice drug. The politics of the book was thoroughly adapted into the mechanics of the game, making it more thrilling. For example, one type of card players can use is the Traitor card which is a decisive factor in the game. Opponent traitor cards will cost you your battle forces and action cards. Once an opponent’s Treachery Card matches the leader you use in the game, it’s already the end for your faction.

Harry Potter – Hogwarts Battle is a co-op, deck-builder that moves through the books of J.K. Rowling’s magical series — starting with The Sorcerer’s Stone and ending with The Deathly Hallows. Eventually, players will face villains that were featured in the series: like He-Who-Must-Not-Be-Named.

In Harry Potter: Hogwarts Battle players have to work together in order to fight evil. Aside from getting the chance to cast your favorite spells, this makes the board game a wholesome choice for building teamwork among family or friends. Players will have to use their spells and characters to help each other and go through the game as a team just like the brilliant wizard trio who used their unique abilities to help each other.

Nothing beats a game night with great company. But if you’re looking into leveling up the next one, why not add some world-building into the mix?

What other board games are based on books? Have you played or read them? We’d love to hear your thoughts!