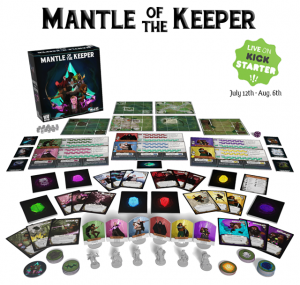 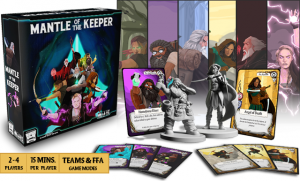 The Keeper of Vaile has fallen and chaos grips the realm. In response, the Ascended – Protectors of the Cosmos – have selected 6 candidates known as the Chosen to compete in the hallowed Keeper Trials. You stand among them.

The one who prevails will be named the Keeper of Vaile. Do you have what it takes to defeat your opponents and take up the Mantle of the Keeper? 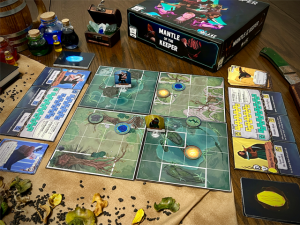 Mantle of the Keeper is a 2-4 player card-driven skirmish game where players take on the role of one of six Chosen characters to either battle head to head or on teams to become the next Keeper of Vaile. Each Chosen has its own individual playstyle, deck of cards, and abilities, allowing players to leverage its Chosen’s strengths. Construct the arena to create a fierce battle experience while placing Hazard tokens to push the limits of movement and strategy. Utilize your Chosen’s distinctive skill set to unleash devastating attacks upon your foes. Counter the attacks of your rivals with powerful defenses to gain Favor, which can be spent to upgrade your Chosen and use your unique abilities.

See what our reviewer had to say about Mantle of the Keeper!

It is time to take up the Mantle. Do you have what it takes?

MANTLE OF THE KEEPER will be live on KICKSTARTER until Sat, August 6 2022 4:30 PM PDT, and has a funding goal of $17,500.
Find out more at BGG.
Want our most important news delivered to your inbox at least twice a week????? Just fill out the following and submit. It’s that EASY!
Never Miss Everything Board Game posts again! Get them in your inbox: