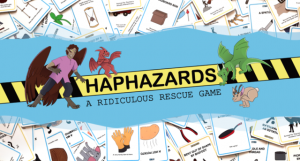 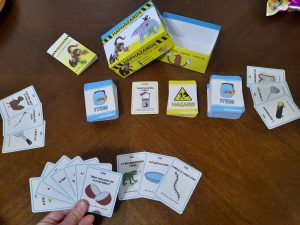 HAPHAZARDS is a hilarious card game for 3-8 players, ages 5 and up. Players are accident-prone adventurers in a fantasy world.  Each round, one player encounters a dangerous hazard, and the other players use their cards to attempt a rescue. The player with the best rescue plan wins!

Can  you defeat the Yeti with a banana, a circus tent, and a hamster? Can  you cross a ravine with a bale of hay, a skateboard, and a jackalope?  With 275 cards in the deck, the possibilities are endless!

HAPHAZARDS was created by a family of four as a way to pass the time during the pandemic.  It has been a labor of love, and has become clear that it has appeal to adults and kids alike. 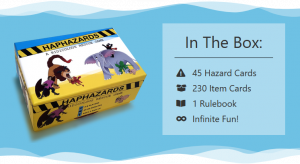 HAPHAZARDS is fully developed, tested, and complete.  The funds raised on Kickstarter will be used for the game’s first production run.

Backer rewards include the game, acrylic pins, an autographed promo poster, and a plushie of the mascot, the Jackalope.

HAPHAZARDS will be live on Kickstarter until July 31, 2022.

Be on the lookout for a review from us of: Haphazards – A Ridiculous Rescue Game!

HAPHAZARDS – A Ridiculous Rescue Game will be live on KICKSTARTER until Mon, August 1 2022 5:00 AM PDT, and has a funding goal of $9,500.
Find out more at BGG.
Want our most important news delivered to your inbox at least twice a week????? Just fill out the following and submit. It’s that EASY!
Never Miss Everything Board Game posts again! Get them in your inbox: