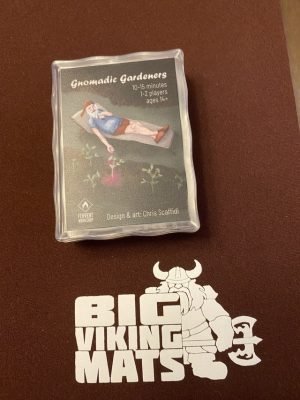 You and your opponent are head gardeners at the community garden, with teams formed of gnomes. You need to complete tasks to raise supplies for the local food bank. Unfortunately for you, your free-spirited sprites frequently switch teams and help your opponent accumulate bliss points instead of you! By maintaining a well-staffed team, complete tasks and accumulate bliss to win the game.

Each round, players place at least 1 gnome card face-down from their hand. Simultaneously reveal gnomes and determine who will resolve their cards first. Use your gnomes to fulfill requirements depicted by the current task cards. Doing so will score bliss and sometimes recruit loyal enchanted animals who will help you in future rounds. Finally, both players pass played gnomes to the opponent for use in the next round, while also keeping their own unplayed gnomes. Win by gaining 77 bliss.

Distinctive mechanics include (1) gaining your opponent’s expended cards, (2) a sliding card system to generate fresh tasks that you can slightly foresee, and (3) an automa to support solo play.

Distinctive theming includes (1) garden gnomes, (2) inoffensive but silly illustrations, and (3) an unrepuntant love of puns in the flavor text.

Disclaimer: The publisher provided the prototype copy of Gnomadic Gardeners. The opinions expressed in the review are completely my own. 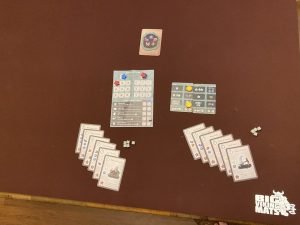 Overview:
I love gnomes. I have gnomes in my garden. I have a gnome at my office. I have gnomes in my home. I also love short two-player games. Fervent Games has released a card game that somehow checks both boxes at the same time with Chris Scaffidi’s Gnomadic Gardeners. It plays solo or with two players in about 15 minutes. So far, so good. I am going to review this game from a two-player position.

To set up, unfold the game mat. Place a star token of each color at the zero of both scoring tracks. Shuffle and deal 6 gnome cards to each player. Shuffle and flip over the top two of the “task” cards placing them side by side. You are now ready to play.

The rules are simple enough. Each gnome card has two components that are important each round: the time in the upper left, and the icons down the left side. Each round plays simultaneously. Each player decides which gnomes and how many gnomes to play in secret. When both are ready, the gnomes are revealed. The player that played the combination with the lowest time allotment goes first. On a tie, the player with the fewest gnomes played goes first. Still tied, the person in last place. Still tied? Youngest.

The theme of gnomes was really what drew me to the game. Thematically, it works. Chris Scaffidi tells you that you are recruiting gnomes and that they can switch sides (after you use them). I love the theme and the little story behind it.

Mechanically, Gnomadic Gardeners utilizes such a small amount of cards very efficiently. Using the Task Cards twice before discarding each time and shuffling between uses keeps the replayability high, and it maximizes each card. The gnomes themselves utilize the iconography and the time on each one. I love the mechanics in their simplicity and strategic-ness.

You and your opponent are trying to match the combinations of icons on the left task card to obtain the reward on the adjoining right task card. Each gnome card played may only be used for one task. Only the first player to claim a task can claim it that round. Any gnome played is handed over to your opponent. If the task you wanted was taken by your opponent before your turn, the gnome(s) are still lost.

Adjust the scores accordingly for each player. If any player meets or exceeds 77, the game is over and the highest score wins. Why 77? I don’t know. I can tell you, don’t get too comfy in the lead. I was at 76 to my son at 66. He went and scored a massive 20 to my 8, and I lost.

The artwork is cute and easily read. The flavor text adds fun to the game. The components, on the other hand, do little service to this game. The mat is a quad folded piece of paper. It will wear out quickly if you play this game often, and I already have played it over 6 times. You can laminate it, but then it will not fit in the case. I would suggest each player receives two cards to make up their own scoreboard.

Next, the cubes, while I hate cubes, they work for this game. However, I would do away with the stars and just make them cubes, too. Then, rid the game of the plain gray cubes and give each player a set of red or blue cubes. The yellow discs are fine. All the wooden components will withstand play, but they just could use a little tweaking. I had this thought after playing the game with The Son: switch out the cubes for cones. They would look like gnome hats.

I sat and figured this game out during lunch hour by myself. Why I didn’t learn the solo version, I do not know. I just didn’t. I took the game home and taught The Son (10yo) the game. We played it back-to-back. It is always fun to watch him learn a new game. By game three, he had it figured out and beat me, as I mentioned above. The game plays fast. I also played it with a fellow designer at a restaurant as we waited on our food. I taught it, and we played it, in less time than it took to get our lunch. Literally, lunch arrived as we were closing the lid. The replayability shines. Each game, the gnome cards are randomly dealt, and the tasks cards come out randomly. This keeps the game interesting!

Other than the component issues I mentioned above, Gnomadic Gardeners plays fast and fun. I would also suggest possibly an A/B version of the task cards to offer a little more variability and add just a bit more replayability. The randomness can affect the game in bad ways, though. If you can get the right helpers for a cheap cost early, you can run away with the game.

I thought I had figured out a way to break the game. A strategy that was unbeatable. It had worked every time I employed it. Then, I got trounced by The Son. While I still think that strategy has some promise, Gnomadic Gardeners is certainly not broken. The flavor text and artwork are cute. I need to learn the solo version, but I just enjoy it so much as a two-player game that I have not needed to learn the solo version. I think the age of 14+ is a bit too high, as I played and was beaten by my 10 year old. I urge you to “gnome” and get it! Sorry, that was not only forced, but it was also terribly not punny…

After reading Adam’s review, if this sounds like a game for you at the time of this posting Gnomadic Gardeners is waiting for you to click the Notify me on launch button on KICKSTARTER. I’m told it’ll go LIVE once it gains at least 100 followers on there, so don’t dill daly go follow it HERE or by following the button below, make sure you click the same button on Kickstarter once you’re redirected!

Check out Gnomadic Gardeners and Fervent Workshop on: