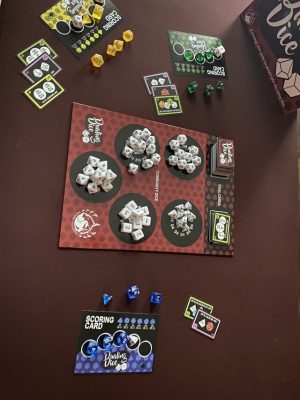 Dualing Dice is a new strategy dice board game from Mythica Gaming in which 2 to 4 players face off by rolling two dice at a time in a duel to be the first to complete their goals.

You can choose your pair of dice to maximize the odds, or you can pick your favorites and take your chances with Lady Luck. Select your own roll, or steal an opponent’s to interrupt their strategy. Play a light, friendly game or a cut-throat battle… it all depends on the players at the table.

The first player to earn 15 points by completing their goal card conditions wins the game—but everyone’s a winner when they get to roll dice!

Disclaimer: The publisher provided the copy of Dualing Dice. The opinions expressed in the review are completely my own.

Dualing Dice jumped into my bag while at the local gaming convention along with a few other games from Mythica Gaming. The tagline on the box drew me in: “A strategy dice game for people who like rolling dice.” I think that sums up why I got it nicely.

To set up, set the gameboard in the middle of the playing area. Dump out the white dice onto their corresponding spots on the board. These are the community dice. Every player takes a scoring card and the associated color of dice. Shuffle the goal cards and place them on their spot on the main board. Set up complete.

Rules are simple. At the start of every set (a set is filling up the scoring card), each player is dealt three goal cards. One must be kept, but up to all can be. Any unwanted cards are discarded to the bottom of the draw pile (I don’t know why they are not put in the discard pile), and new ones are drawn up and must be kept.

Then, every player selects what two dice they want to roll. It must be any one of their colored dice and any one of the white dice from the community board. Each player then simultaneously rolls their pair. The player whose colored die results in the highest value picks first.

Dualing Dice is an abstract game. It does not have a theme. This does not bother me in the least. I don’t care about the theme to Yahtzee, why care about this?

Mechanically, Dualing Dice works on a new level from Roll For It. Roll For it is a game that my friends and family adore. It is loved by many more than just them, too. Dualing Dice takes the dice roll and setting to the next level. What makes this game even better, the hidden information! Not knowing what I need means that you could accidentally roll something I need, and you need, but I could take your rolled white die before you can. Poker faces now must be worn. If I see that you rolled what you needed on your dice, and it fits what I could use, I might just take yours.

When the active player picks a die, it can be any white die rolled, or the colored die from that player’s set only. The other player’s colored dice are off limits. This is where some strategy comes in. When a die is selected, the player places it on their scoring board carefully to retain the number it was on. The purpose of the dice being kept is to try and match the requirements of the cards held by the player. So, back the cards. The goal cards have values of 1 through 5 points. Obviously, the easier combinations to get are 1 point, like and 3 D12’s. On the other end, 5 point cards are harder to score, like a 20 on your D20. At the end of each set, five dice being kept, you score the set. Each die on a scoring board can be used for more than one goal. For instance, I had a 3 point card that required any color 7 and 8, and another 3 point card that required any color 8 and 9. My red 8 counted for both of these goals. If you can work your goals together, you can really maximize your points. Once all scoring goals are set aside, the ones not scored are discarded. Put all dice back in their respective areas. Deal three new goals to each player, and the next set begins. The game ends when scoring a set a player meets or exceeds 15 points. If a tie results, the player with the fewest completed goals wins. (Meaning they were more efficient.)

Artwork for Dualing Dice is minimal at most. Graphic design and iconography are more important in an abstract game such as this. The graphic design tells you two very important things: What Die? What color? And thirdly, if applicable, what value? The 92 different goal cards themselves are standard quality.

There are a lot of dice in this game. Like, a lot. Ten white dice of each D4, D6, D8, D10, and D12. Then, 4 sets of colored dice with one of each of those plus a D20. These dice are nice quality, and easily read. Some dice out there are harder to read than others. The colored dice are translucent, and the white dice are opaque. So, visually impaired can tell the difference between the colored and non-colored dice.

The gameboard might be a little over produced. It is a nice thick chipboard, but it has a really nice backing.

The hidden information makes Dualing Dice stand above other dice rolling games. I love Vegas Dice and Roll For It. Yet, this added little mechanic changes things. It allows for more strategy. Also, allowing the dice to be used for more than one card, perhaps two or a dual, changes it from the others.

Okay, so the box says 2-4 players, the rules state it is set up for up to 8 players. I wish that Mythica Gaming just offered the other 4 sets of dice. That is it. My only complaint.

Sadly, I think Dualing Dice has made Roll For It obsolete for me. I have never played a game before and thought, after the first play, I don’t need to play a different game again. I love Roll For It! I have taught it to so many people. So many people purchased the game because of me. Well, I hope that those same people purchase Dualing Dice! It adds more strategy. At higher player counts, the game gets even better! The more dice to choose from the better. Can you figure out what other players need? If so, don’t roll that die! Trying to link together your three cards for one set to maximize your dice feels like you really accomplished something. I emailed Jimmy over at Mythica Gaming and told him to put this game up on his site! This needs to be available! You need this game!

After reading Adam’s review, if this sounds like a game for you at the time of this posting Dualing Dice is available for purchase at MythicaGaming for only $49.99. Check it out and pick up your copy HERE.
Find out more at BGG.
Did you back it based on our review? Please comment below letting us know!

Check out Dualing Dice and Mythica Gaming on: