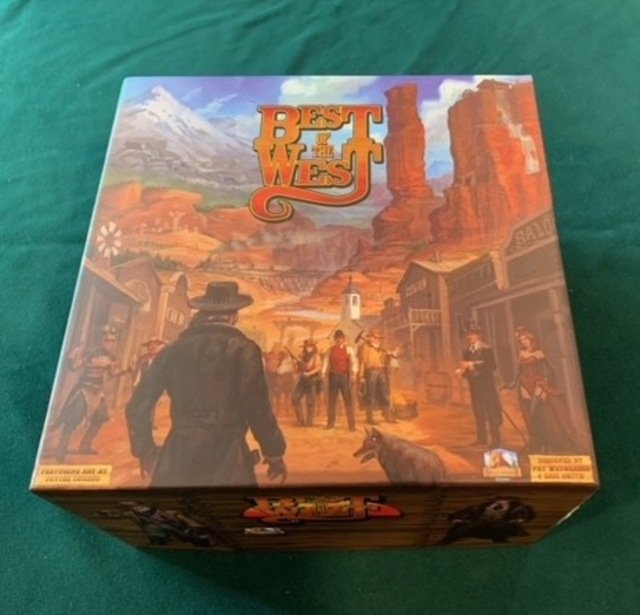 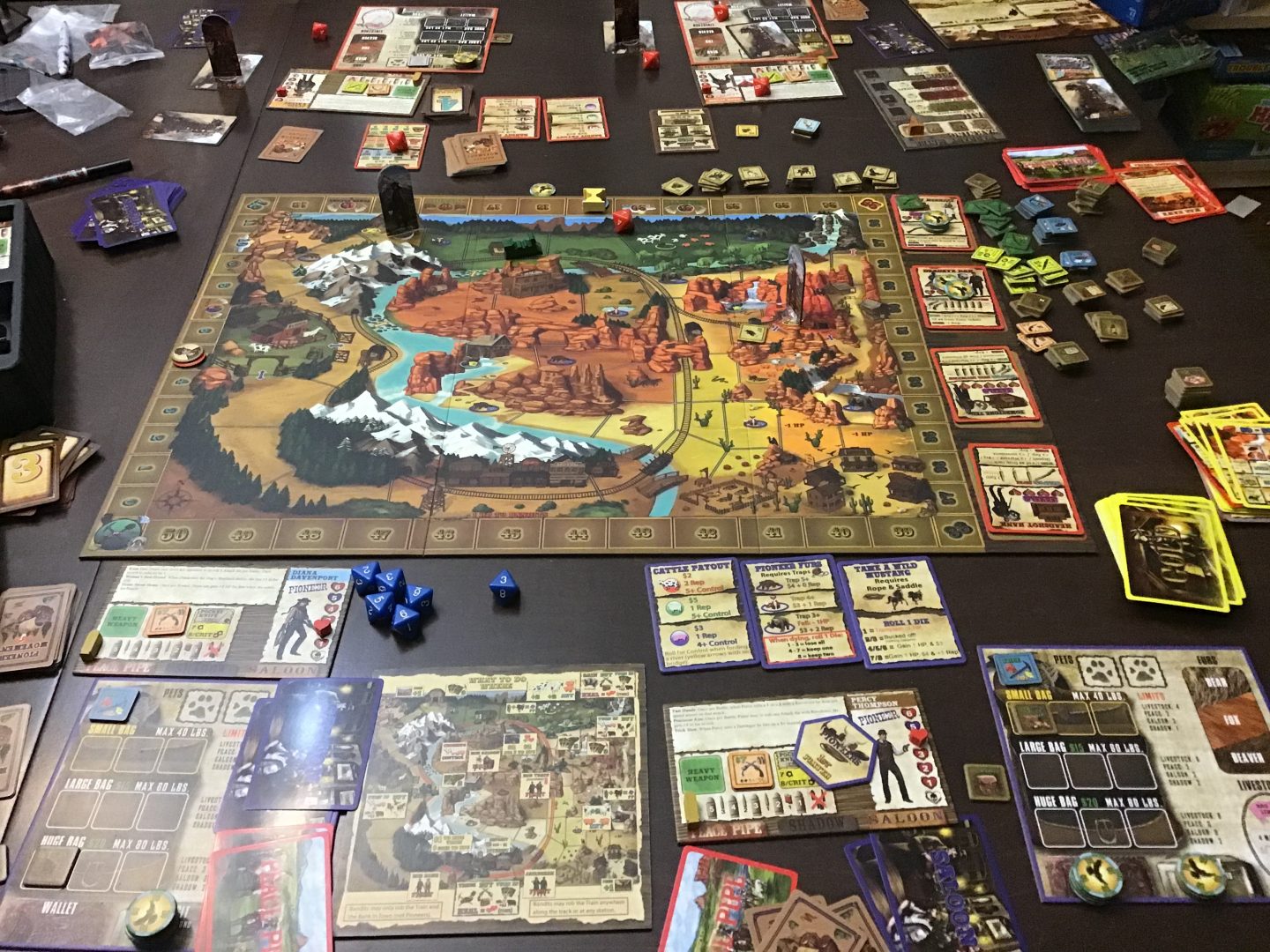 Once in a while, a game comes along where I am not exactly sure what to make of it, requiring me to make a double, triple, or even quadruple take of it for me to size up my impressions of it.

Best of the West is one of such rare games that had me scratching my head for a while. And I will get to explaining my thoughts on this game in just a minute.

For those of you looking for a more detailed walkthrough of gameplay, I would suggest checking out fellow Everything Board Games reviewer Thomas Shepherd’s recent breakdown, as I find that it summarizes things quite nicely, and comes to many of the conclusions that I do.

Personally, I do have some differing thoughts and feelings and conclusions on the final product than Thomas does, but overall, his writing does give a good foundation for what I have to say on Best of the West. 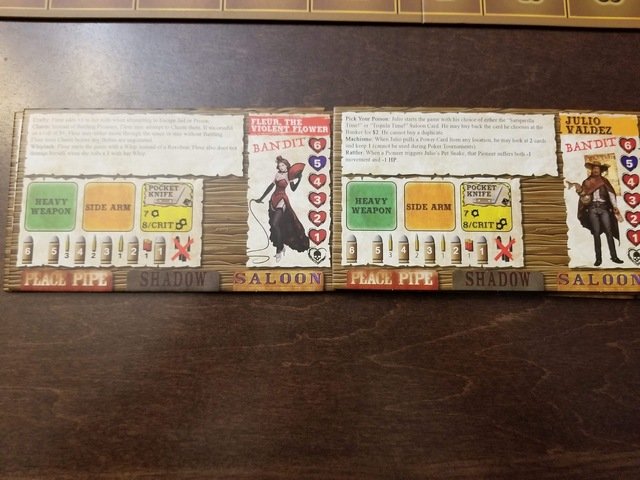 For a very quick overview, Best of the West puts a team of Bandits against intrepid pioneers who are each trying to make a name for themselves. Asymmetric gameplay means each player and faction has unique characters and gameplay styles in a highly thematic game that lasts 25 rounds.

And the theme thankfully is fully intact. Everything from gold panning and train robbing to showdowns and ambushes is included in this game, so this should make for instant appeal to fans of the Western genre.

Now first let me state that having spent the past few nights playing Best of the West that I think that it is a “good” game, and could even be categorized as a “great” game under the right circumstances. But it does take some time to recognize its strengths, more so than I would have thought possible.

They say that first impressions are the most important, and I will say that the initial sights of the game were pleasing. Art was great, highly thematic, the board carried the appropriate “western” vibe, all the components seemed to have their own place. The box itself didn’t seem overbearing at all, being less than the more recent games like the much bigger Eclipse that I recently played, but this lead to a bit of a paradox of a realization for me later (more on this thought, soon). But I did make the mistake of thinking the game would be easy based on appearances!

The quality of the components is overall really good, though sometimes (as in the case of items) small and easy to get disorganized when outside of the box as a result. I did also notice that the storage trays had very sharp bottoms and quickly lead to damaging the interior of the box, so I did have to use scissors to trim the trays and make for a less abrasive squeeze when placing and removing them. 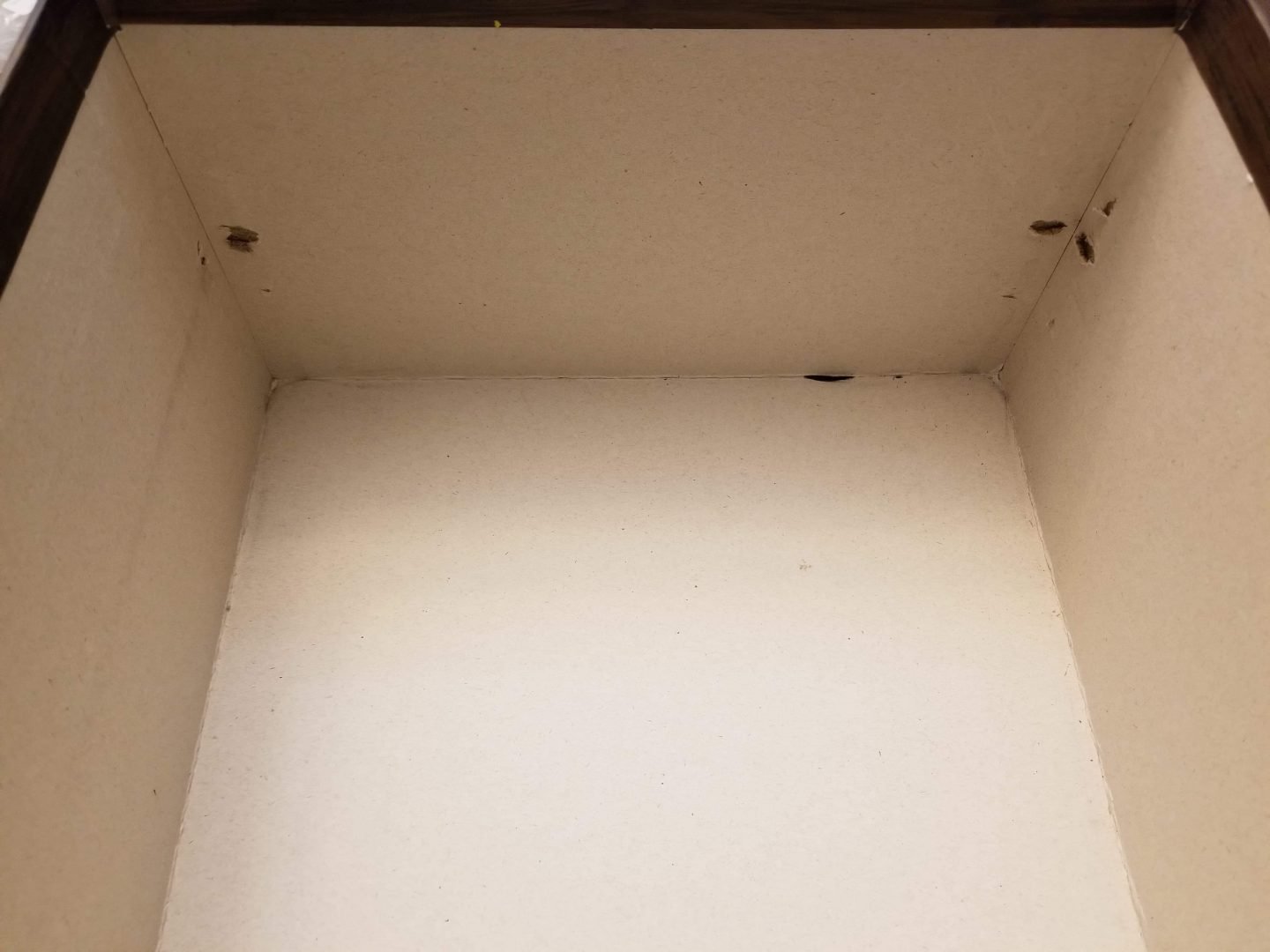 Moving on to gameplay, there were a few factors that worked against Best of the West for me in learning it.

Firstly, I am very much someone who loves to learn board games from utilizing the rule book. I appreciate well-written and organized material, and though I find that Best of the West’s was well-written, pertinent information was generally scattered all over the place in the manual.

Using one example, there is an “Initial Setup” section appropriately quartered near the introduction to the booklet that tells players how much money to take, what items to choose, etc, but then somewhere in the middle of the book it mentions that Bandits should each start with a revolver whereas there had been no mention of this in the Initial Setup. In our first few rounds this lead to a battle between a bandit and pioneer that easily should have been skewed in favor of the bandit since Pioneers do not get this freebie!

And as a broad generalization, this sense of having rules scattered all over the place made it hard to get a sense of enjoyment for a while. Many times, the manual has no reference at all to how certain items and features work, and you later realize that you need to look at one of many player boards to discover how to utilize certain gameplay elements (pets for example). 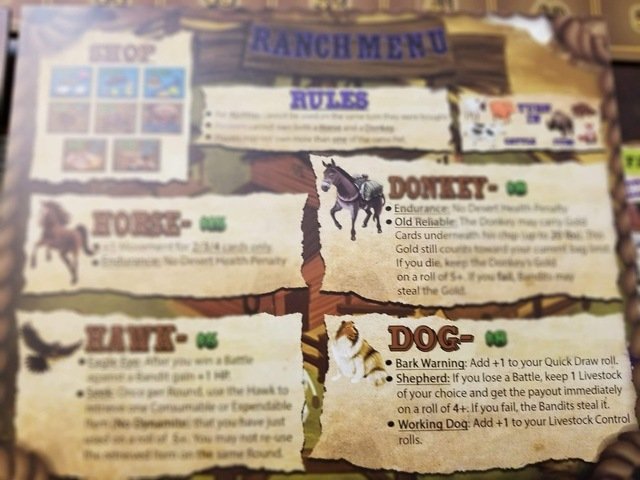 Another factor that works against game is the “false” impression that the game will be fairly easy to learn since it (at least on a superficial level) resembles other games that cater to more entry-level players (I am thinking Ticket to Ride here, since the outer score board somewhat resembles the score tracker).

The reality is that the game has many , many elements working in play simultaneously, and this can be hard to keep track of, both in the sense of mechanics (such as earning interest in the bank, and tracking it) and the sheer volume of play space this game consumes at the table. 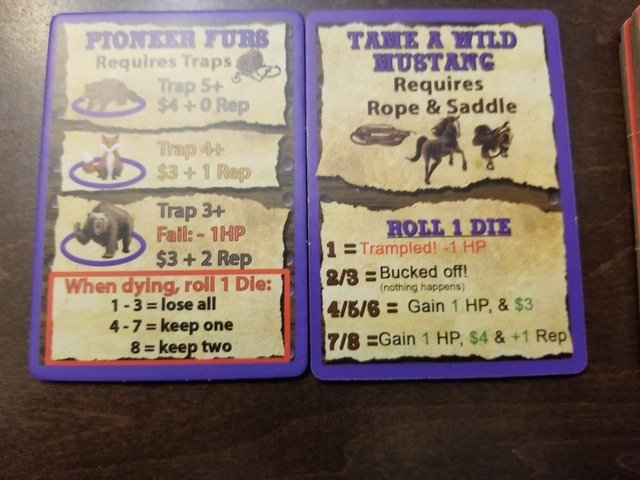 It was rather a surprise noting that the previously mentioned Eclipse game we just played (which has a much bigger box) ended up taking significantly less table space when set up than Best of the West did.

We also did encounter a few problems discerning areas to traverse on the board. The manual does state that white lines will clearly delineate where separate borders between adjacent spaces are, but unlined land on two sides of a bridge will also function as two separate spaces even though it lacks such a delineation (which the instructions do in fact mention).

However, there seem to be some cases where other “natural” barriers such as cliffs have no rule or line indicating that there is a space between two spaces, when it seems that this should be the case from a sense of logistics.

Another point worthy of mention is that the sheer number of items and player boards on the table makes things feel cluttered in very short order.

Although the game does officially support two players, this involves each person controlling more than one bandit/pioneer, making keeping track of players/abilities doubly compounded. We do not recommend this, the game works best with one character per player, making the 4+ player game nights our recommendation. 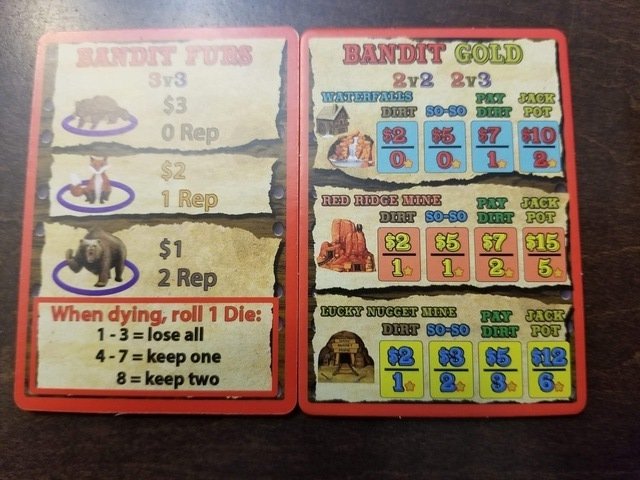 The rather central concept of Hiding/Ambushing also did cause some confusion for us, and while I was thankfully able to get some clarity from the devs on how this functions , the Rulebook did not make it clear enough that bandits using Ambush cards effectively get to move to the location depicted on their ambush card immediately (hiding on space they utilized the Ambush card on). I do find that a dedicated FAQ on the web would greatly help.

It should also be noted that Best of the West is NOT a short game, and is very realistically a 3-4 hour game as denoted on the box. It will take a dedicated amount of time to play, and even at that it may very likely take a few hours just to get a feel for how the game works. Consequently, I find that it may take yet another play through for first timers for your sense of comprehension to lock into place.

“One thing that does stand out in a positive way is the inclusion of a dry erase board with a map and easy boxes for you to mark an action (such as “attack”, “hide “, “ambush” and a target “the bank”, “x pioneer”), making non verbal communication between bandits a breeze , keeping your plans a secret.

Given that much of what I have said thus far may seem to be only criticism, it might come as a surprise for you to hear that our enjoyment of the game actually did incrementally bolster itself over time. It was very much analogous to a steam-powered locomotive that struggles to get out of the station, but manages to gradually build up enough speed to become an unstoppable ride and tour-de-force. And Best of the West does have something to deliver , but it might not be for everyone. 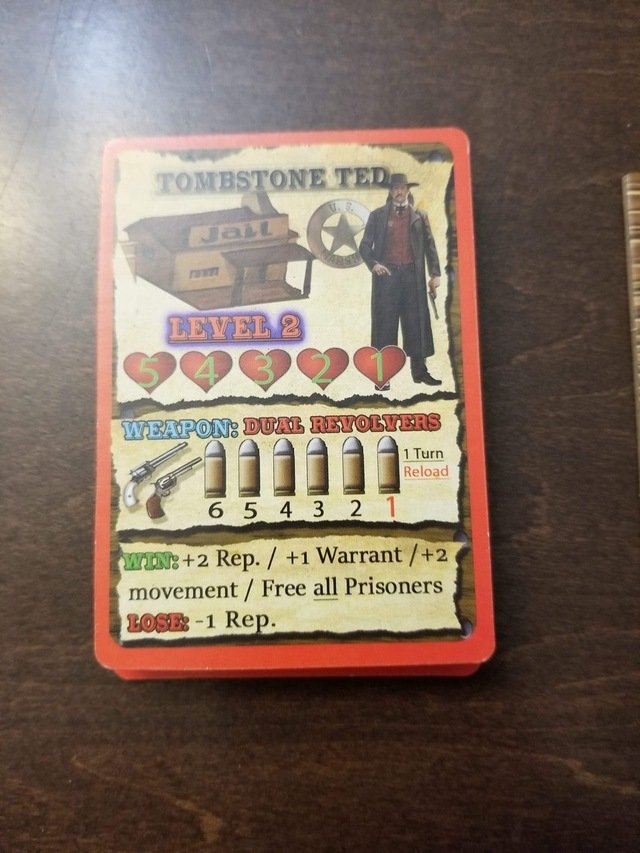 What it can do is provide many options and choices to make that can lead you or your team to victory (too many choices, possibly).

In fact , all of the players at my table felt that the game feels like a double-edged sword in many instances. For example, the sheer numbers of actions available on your turn can make the game enjoyable but this can also be detrimental to your experience when trying to keep track of all of the things you can do.

Ultimately, the game grew on us to the point of feeling satisfied with our experience,  this was initially not an outcome we predicted during the first few hours of our playing, partly due to the learning curve and partly due to the scattered rule layout/presentation.

Once comprehension began to sink in, we found that the game is much better than we projected it would be, but you do need to give yourself some time with it, as it does face a bit of an uphill battle in getting rolling and out of the gates. Bottom line is that we decided we would play it again, and that is a hallmark for success in our book.