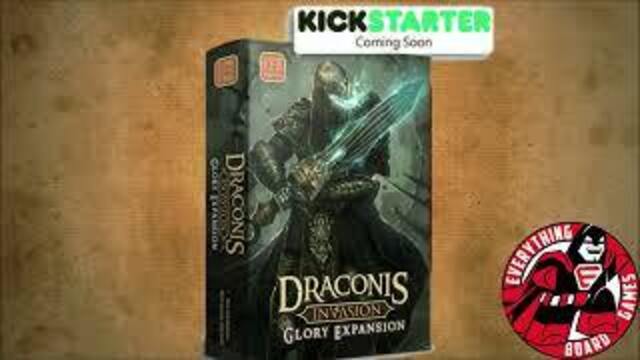 Rising up from the Draconis Invasion are new hopes of GLORY. Together we might rise triumphant! The GLORY pack is a set of 3 modular mini-expansions. GLORY increases gameplay options for both the base game and Wrath expansion.

– CHAMPION cards add asymmetric powers that can be summoned at pivotal moments in the game.
– BONUS cards create changing end-game bonuses such as “Largest Army” or “Most Terror”.
– INVOCATION cards shift the entire flow so that a purchased card can be Invoked – bringing it forth into your hand at your beckon call.

These additions modify the strategy without changing the core mechanics that Draconis Invasion fans love.

Disclaimer: The publisher provided the prototype copy of  Draconis Invasion: Glory. The opinions expressed in the review are completely my own.

After watching Harry’s teaser, if this sounds like a game for you at the time of this posting Draconis Invasion: Glory
is coming to KICKSTARTER soonish. Check it out and back it HERE.
Find out more at BGG.
Did you back it based on our review? Please comment below letting us know!

Check out Draconis Invasion: Glory and KEJI Inc on: