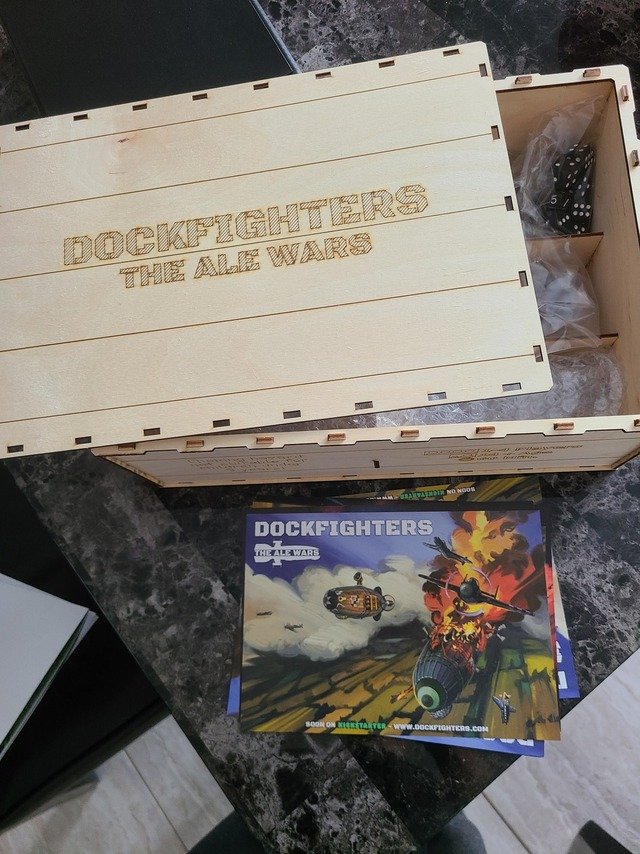 This game arrived via mail, and I was excited to check it out. I was interested in the history (or alternate history) and theme of this game and wanted to see how it would all came together.

Dockfighters: The Ale Wars is a miniature aerial combat game with epic dieselpunk fighter aircrafts, giant airships and airborne launched Dockfighters, set in 1948.
Germany has broken up into small, independent states and you take on the role of a squadron leader, leading pilots from the Bavarian or Saxon Air Forces into combat. Aircraft and pilots change over the course of the game, gaining experience and equipment options.

Get ready to climb into the cockpit and become the most famous Fighter squadron in Bavaria or Saxony!

Disclaimer: The publisher provided the prototype copy of Dockfighters: The Ale Wars. The opinions expressed in the review are completely my own. 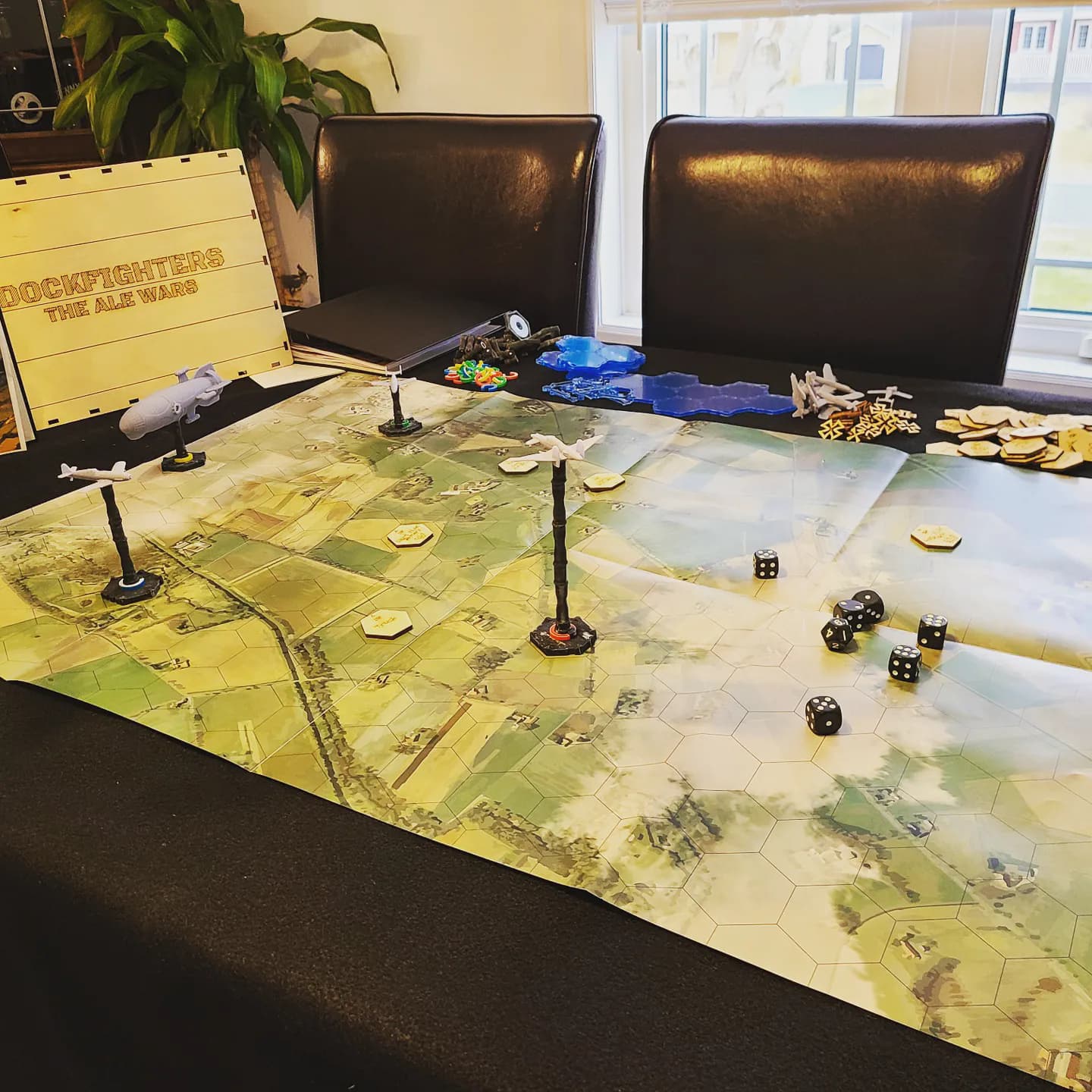 The initial look and feel of this game (even though it was a prototype) was incredible. The custom box, 3d components, and, well everything, was impressive. In terms of visual appeal, this game had a wow factor. 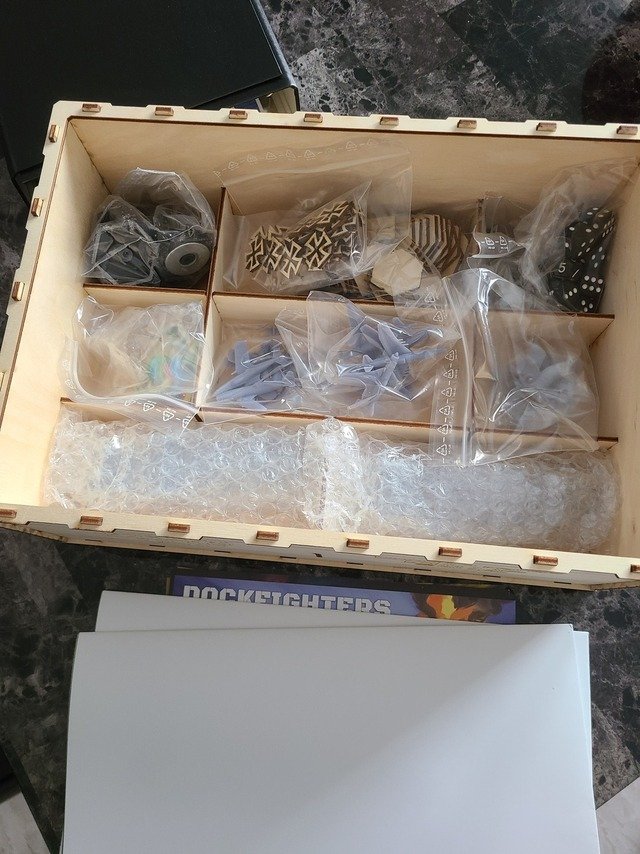 I hate to say my favorite part was the box, because it would sound like the game wasn’t good at all, but it was. I loved it as soon as I saw the custom box, the “crate” style and its laser cut design and wooden separators. The magnetized minis and stands and the training style starting missions were other standouts. 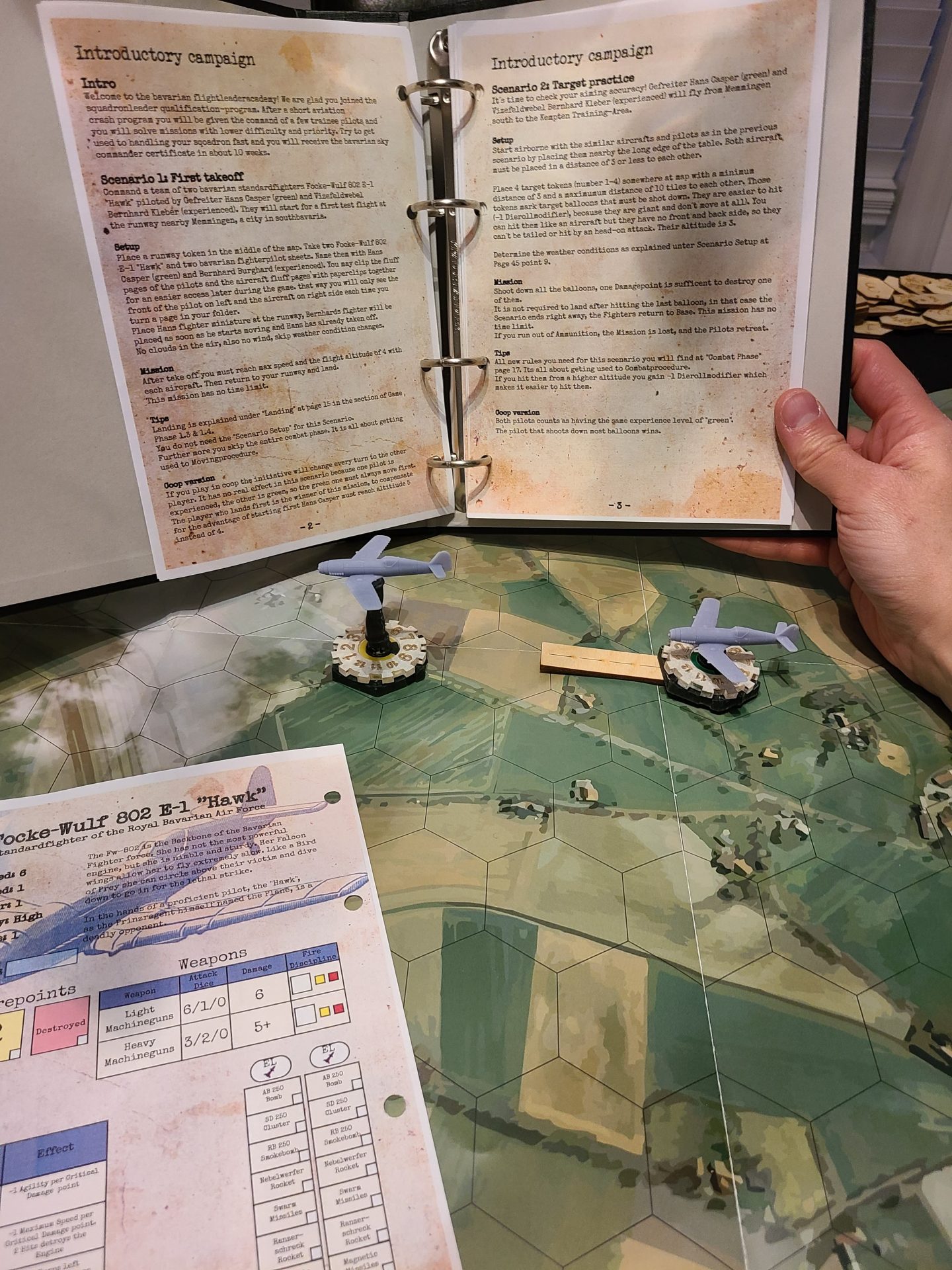 Even as a veteran board gamer, I felt a little overwhelmed by the sheer depth and size of this game. That doesn’t speak for the quality or enjoyability of the game, rather that perhaps, wargames of this genre may be outside of my own tastes and comfort level for a digestible weight.

The story and theme, the wonderfully immersive campaign, and the detailed control that you have in this game – especially with carryover pilot(s) experience and planes – are major wins for 3D Art Labs. Even though this title genre and type would not be my own preference I still appreciated the game and its attention to detail. 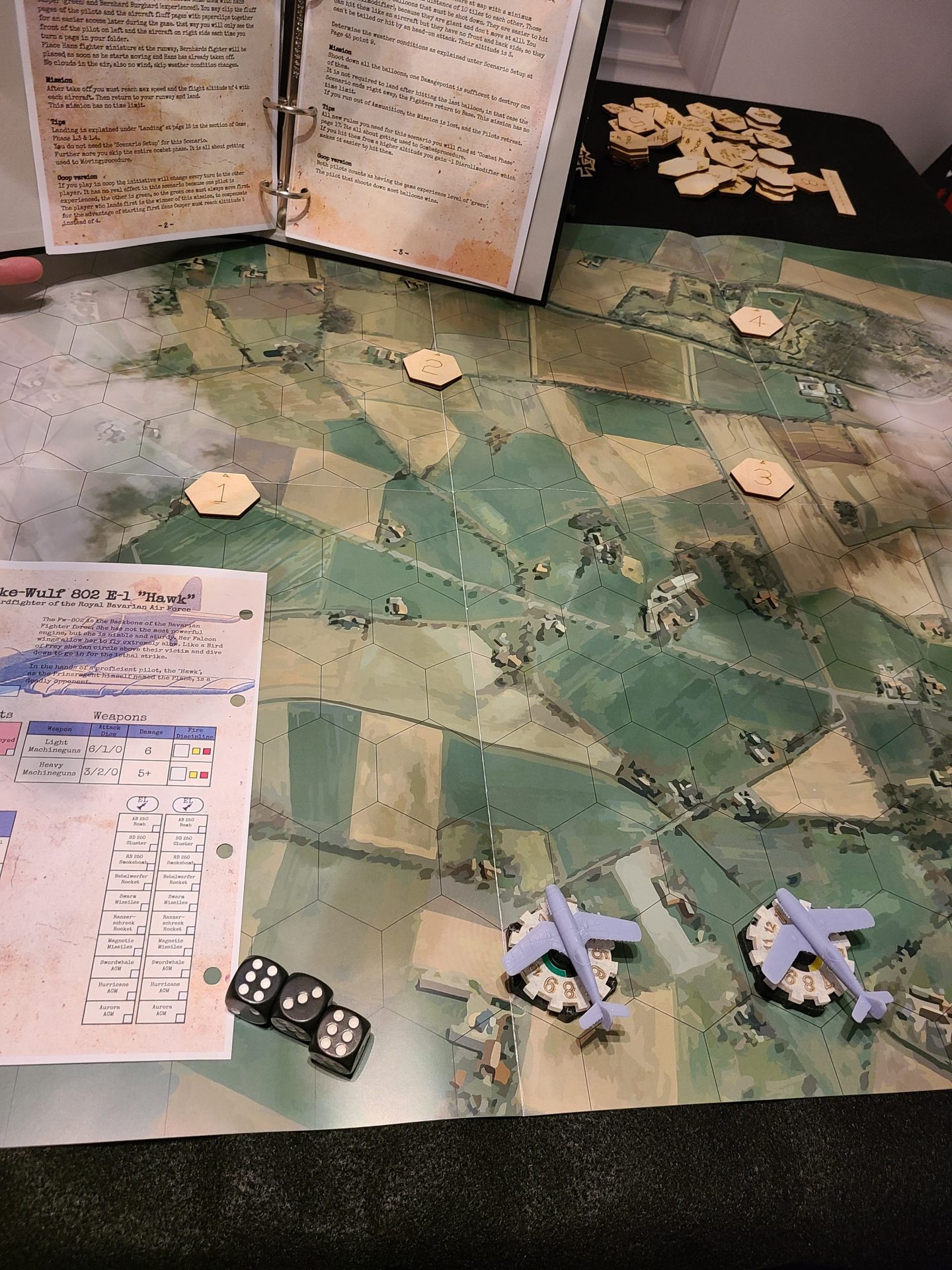 – The Component Quality
– In depth rulebook
– Beginner Missions to ease you in
– Multiple Modes (Solo, Coop, Freeform)
– Thematic Immersion
– Perfectly Interlocking Pieces
– Magnetic pieces
– A true feel of being in combat and/or real risk and reward 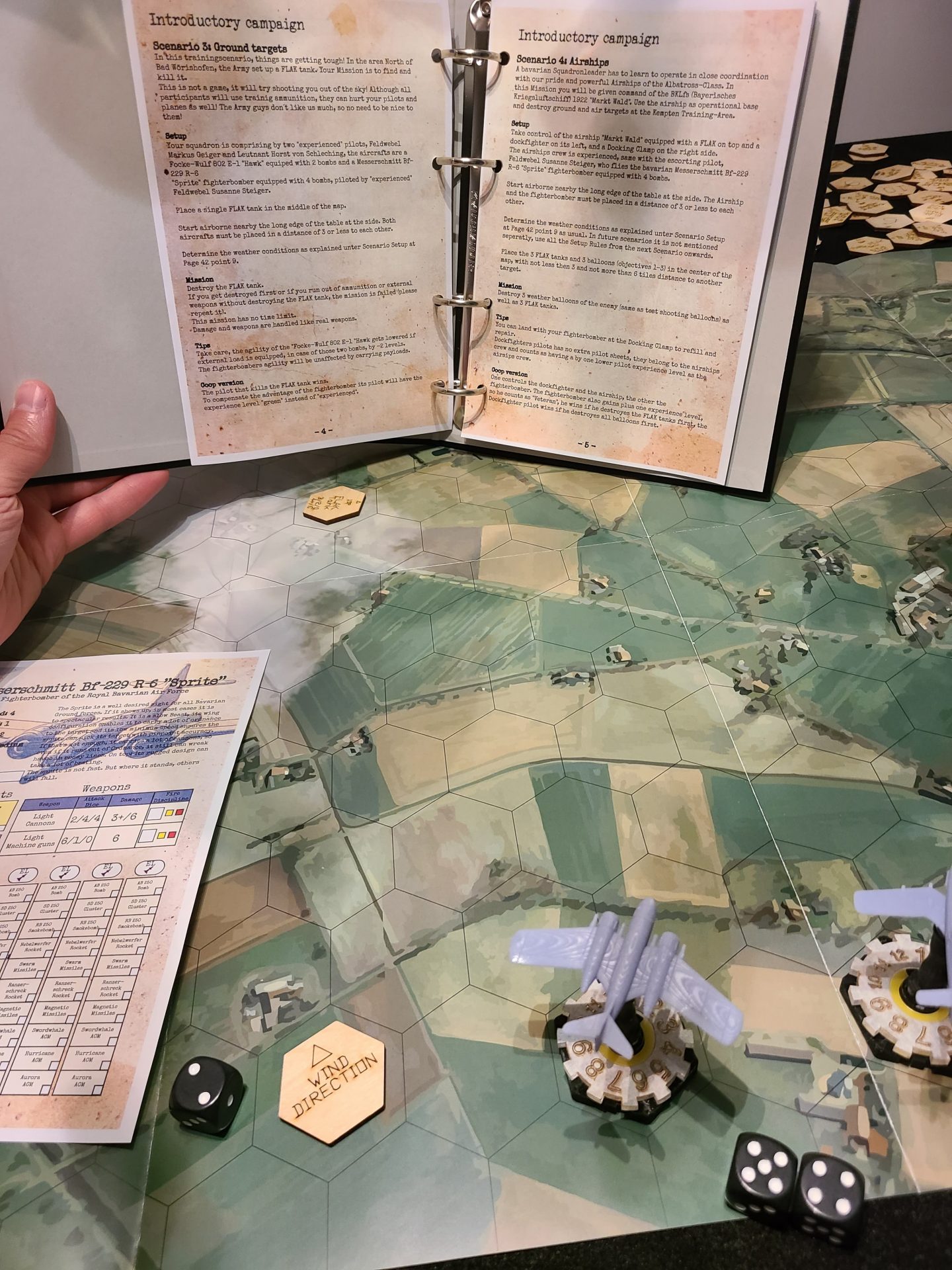 – I would like more resources (which are probably coming) in English and playthrough videos. This was way too rule heavy for me and I had to read through in several sittings.
– The rulebook needed to be revamped but it is not in its final form. This will probably be sorted. This includes more images and image examples.
– I think the complexity and game length need to be adjusted to heavier and longer. Perhaps reclassifying its genres. I’d consider this a legacy game that would be best with a set group that committed to play over multiple sessions.

I would not recommend this for new players that were not familiar with the medium or heavy categories. If you’re very lucky like me and have an expert “rule reader” in your group, drop this off to them in advance. This game is a bit of a time investment to get into but I think players that like wargames will be pleased with the results. There is no doubt that they put serious effort and attention into this game and have put together a great looking product. I posted around some pictures of my mission set-ups and several people reached out to get more info on the game. If you’re interested, I encourage you to check out some videos and further content for the game. Cheers! 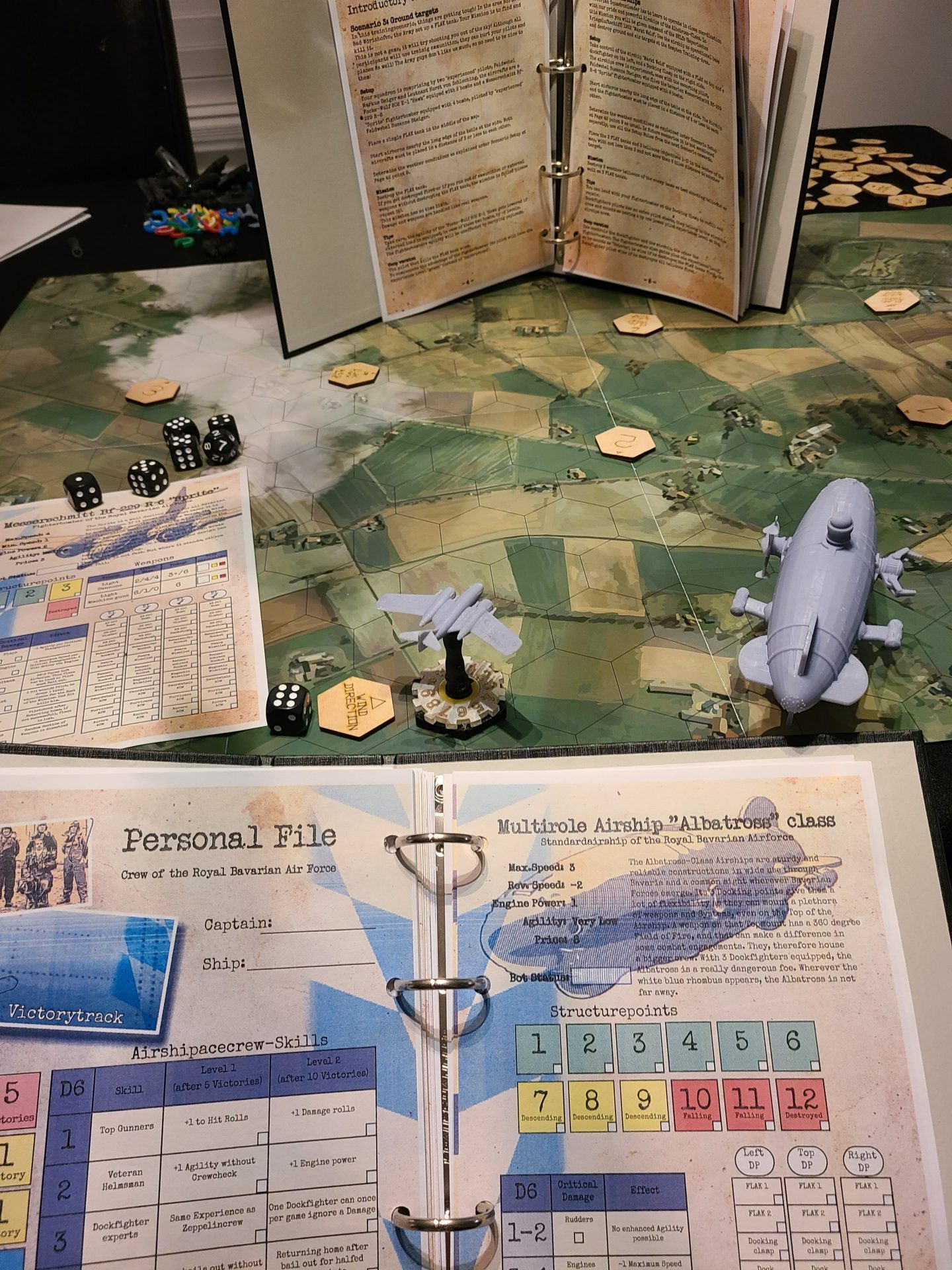 After reading Brad’s review, if this sounds like a game for you at the time of this posting Dockfighters: The Ale Wars will be live on KICKSTARTER from 24 May 2022 until 16 June 2022. Check it out and follow/back it HERE.
Find out more at BGG.
Did you back it based on our review? Please comment below letting us know!