In case you missed our condensed review that lead back to this review in our 3rd issue of Everything Board Games Magazine, Here is our Jazz Paladin of Everything Board Games’ Full Review. Don’t miss our other magazine Exclusive Content! After you read Jazz’s review see what the Game Cows had to say about how you should commence playing your 1st Game of Mage Knight. I know I will be as it’s been on our shelf of opportunity WAY TOO LONG! 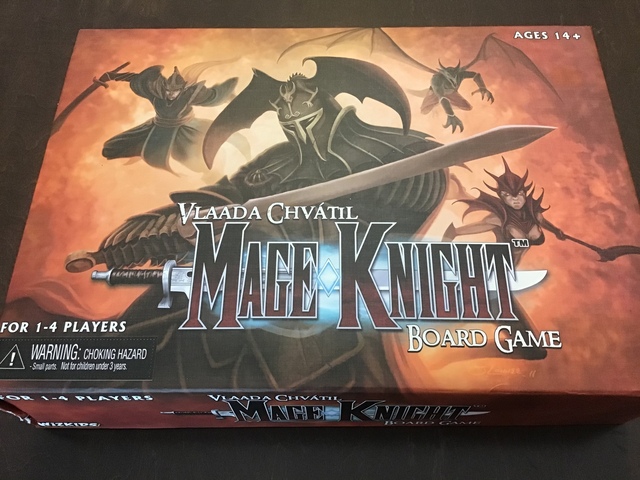 No. of Players: 1-5
Ages: 14+
Playing Time: 180+ minutes
Find more info on BoardGameGeek.com
From the Publisher:

Combining elements of RPGs, deck-building, and traditional board games, the Mage Knight Board Game puts you in control of one of four powerful Mage Knights as you explore (and conquer) a corner of the Mage Knight universe under the control of the Atlantean Empire. Build your army, fill your deck with powerful spells and actions, explore caves and dungeons, and eventually conquer powerful cities controlled by this once-great faction! In competitive scenarios, opposing players may be powerful allies, but only one will be able to claim the land as their own. In cooperative scenarios, the players win or lose as a group. Solo rules are also included.

The overall rating in chart below is based on Jazz Paladin’s Review: Here is our Jazz Paladin of Everything Board Games’ Full Review

Now let’s find out how to commence your first game of Mage Knight, shall we?

Your First Game of Mage Knight

Step 1: Don’t start with the rulebook.

The rules are very intimidating and can turn new players off pretty quickly. The new rulebooks are much better, but it can still be a lot to take in. If you decide to ignore rule 1 and do try to read the rulebook, the rulebook says don’t read this. Instead…

Mage Knight’s rulebooks have all been refined and are much easier to follow. The walkthrough game is taken at an excellent pace and introduces rules as they come up. If you’re like me and like to read rulebooks cover to cover before the game is even out of the box, you’re going to get a headache.

The Walkthrough game is a simple scenario that can be played with 1-4 characters. I played it as a solo game to pick up the rules. I like to get a feel for a game before I explain it to anyone, and It’s a pretty awesome solo game in its own right.

To start your first game, you’ll be placing the map tiles in order so that the 1st 3 tiles will always be in the same spot. The greener countryside tiles will be placed in order and stacked on top of the light-colored core city tiles. I always thought that was a cool mechanic. That way players will start out at the fringes of civilization and move forward into the more civilized parts of the world.

For the first game, the objectives are simple to help you learn. The Mage Knights are on a recon mission to the city. The overall game objective is to explore the map tile that has a city on it.

That’s not a whole lot of fluff, but you’ll have plenty of time to wander around and get used to the basic mechanics and map tile locations.

Throughout the game, I bounced back and forth between the walkthrough board and the game, and it took me about an hour just to get everything set up. Once you have an idea of what everything means it’s going to be much quicker in setup.

I had a blast playing the setup. The game has so much going on and I couldn’t wait to play again.

Thanks Brian from over at Game Cows. Now hopefully I’ll know how to figure out the game and be able to get into it.

Want to see what Brian had to say about the rest of the game in his full Mage Knight Review?

Check it out here:

Check out Mage Knight Ultimate Edition and WizKids on:

Find out more about the Game Cows HERE.