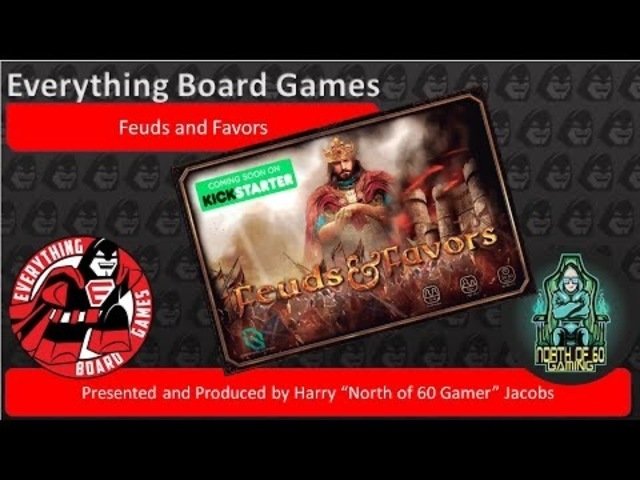 Feuds & Favors is a medieval-themed, turn-based, strategy card game featuring rival clans that are all competing for the title “The Paramount Legion”; the most respected title in the kingdom. Players use stacks of cards, called companies, as their legion.

On their turn, players must choose a series of 2 or 3 actions to further their cause. They can make an optional opening move but must make a positioning action followed by a main action.

Players can battle with each other by choosing one of their cards to bring into combat with an opponent’s. They can also gain permanent and temporary bonuses through quests and influential figures. A player may even lay cards that affect a battle when they are not a part of it.

There are two ways to win: Victory by collection of trophies (similar to victory points) or by survival (think last man standing).

Disclaimer: The publisher provided the prototype copy of Feuds & Favors. The opinions expressed in the review are completely my own.

Today Harry of @North of 60 Gaming gives us a real treat of a preview/walkthrough of an upcoming game (coming to Kickstarter in less than 2 weeks!!
https://www.kickstarter.com/projects/convivialgames/feuds-and-favors-strategic-card-gamehttps://www.kickstarter.com/projects/convivialgames/feuds-and-favors-strategic-card-game that allows you to take the role of a city state leader and garner favor and trophy’s in order to show your strength to your opponents.

The vanguard derives from the traditional division of a medieval army into three battles or wards; the Van, the Main (or Middle), and the Rear. The term originated from the medieval French avant-garde, i.e. “the advance guard”. The vanguard would lead the line of march and would deploy first on the field of battle, either in front of the other wards or to the right if they deployed in line.

Feuds & Favors (2022)
Prove your valor on the battlefield and claim your rightful title!

Be notified when it launches on Kickstarter here:
https://www.kickstarter.com/projects/convivialgames/feuds-and-favors-strategic-card-game

After watching Harry’s review, if this sounds like a game for you at the time of this posting Feuds & Favors will be live on KICKSTARTER in just over a week. Check it out and make sure to get notified when it launches HERE.
Find out more at BGG.
Did you back it based on our review? Please comment below letting us know!

Check out Feuds & Favors and Convivial Games on: