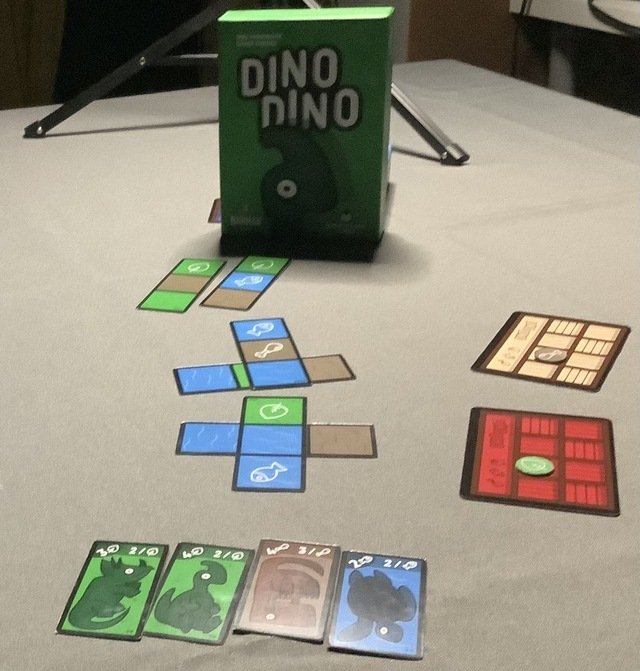 In Dino Dino you are a dinosaur caretaker. Build your own park, collect food and place as many dinosaurs as possible in an ever-expanding world! Does your collection ultimately score the most?

Dino Dino is played over several rounds in which each player takes separate turns. During a turn, the player can choose one of the following 2 actions.

Action 1 will be performed the most. During this action, the player takes 1 of the face up land tiles. This is then placed on its existing land. This way, your own park will expand in size. As soon as you place the tile you get food. There are 3 types of food: plants, fish and meat. When the same food icons touch each other, you create a chain. This way you get extra food.

If a player has enough food, action 2 can be performed. Every dinosaur has some kind of food that they want to eat, you need a certain amount of this food to be able to place them in your park. The dinosaurs give you points for a certain food type at the end of the game. This depends on the number of food icons surrounding the dinosaur in the park.

The game is over when all the land tiles have been placed. The player with the highest score wins the game. 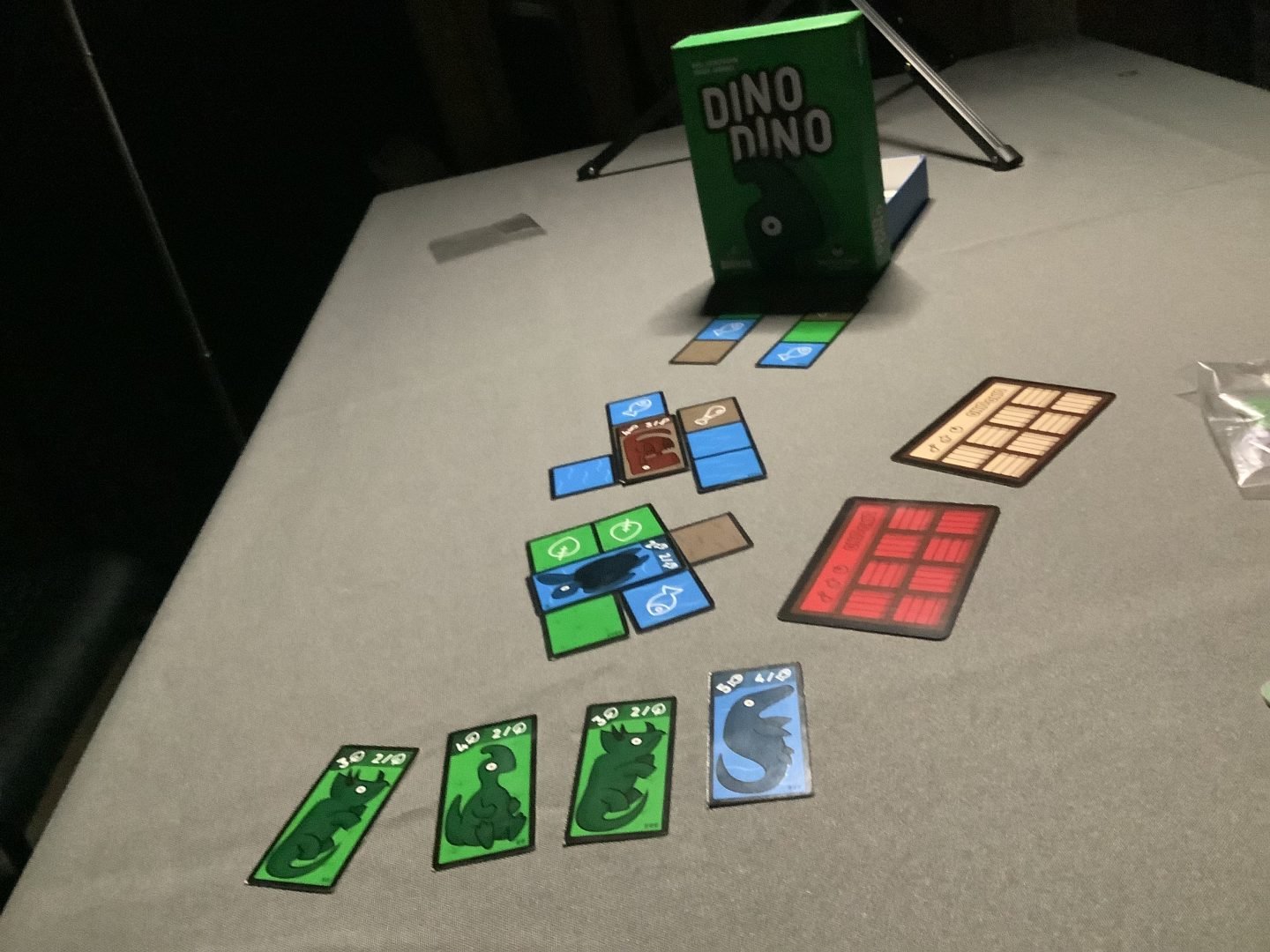 I love dinosaur games. I don’t like how expensive they can be. Dino Dino is small, cute, and inexpensive. It boasts a short playtime that will allow it to easily be played over a lunch half-hour. All the stars aligned for a game that I had to try.

Sort out the tiles per their backs. Then sort out the sets of tiles for the player count. Flip over the number of players plus one land tiles, three dinosaur tiles, and one omnisaur. Separate the food tokens, give each player a double-sided start tile (they are the same on both sides) and a storage tile. You are ready to play.

The dinosaur (oldest player) is the starting player. On a turn, the player selects to add a land tile and collect food or pay their stored food to collect a dinosaur.

The theme of building a dinosaur park has been done. A lot. Basically, every dinosaur themed game is this exact theme. Dino Dino scales it back and makes it accessible to the masses. No $60 game that physically weighs seven pounds. No countless little pieces and player boards and dice. Just tiles. The mechanic of overlaying tiles to build your park and maximize your point potential works well. 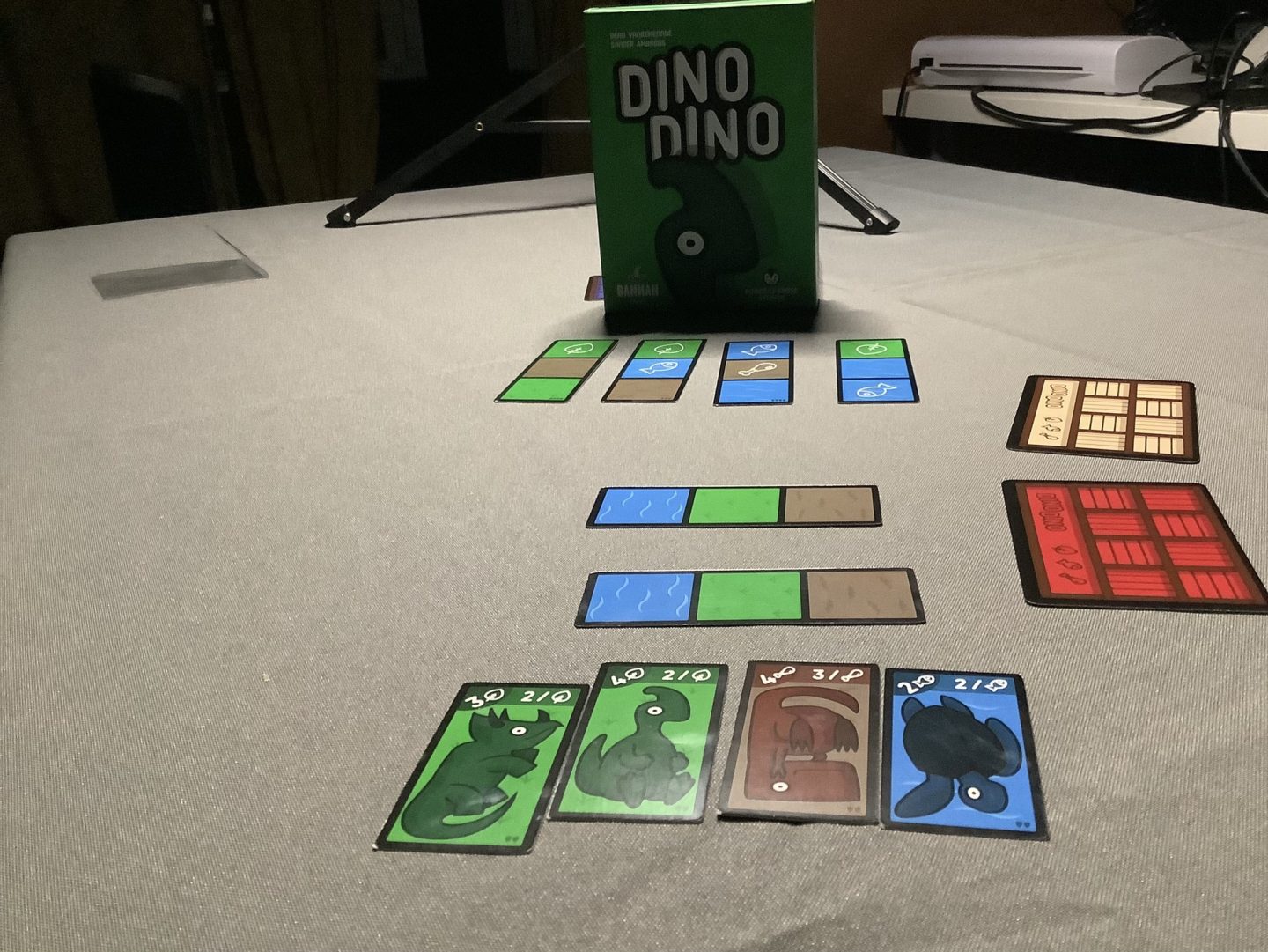 When selecting which land tile to play, a lot of thought must be put into it. Each tile must overlay an existing land tile or tiles, but never covering all three zones. Any of three face up tiles are up for grabs. Don’t like any of those? Well, you can take the top facedown one without looking at it first. Then, that player can collect one type of food off the tiles JUST placed. You can collect more than one of that food if you can make a food chain. This happens if you can get more than one icon of the same food type next to each other. Place the newly acquired food on the storage card. You can never have more than 8 food tokens.

The other option is to use the previously collected food to purchase a dino from the four face up dino cards. The cost to purchase the dino is in the top left corner. Each type of dino requires you to match the same type of food. An omnisaur can be bought with any type of food. Placing the newly bought dino takes as much thought as placing land tiles. The dino cannot overlay any portion of any other dinos already in the park, but they must cover at least one of the matching terrain type. For example, you bought a blue water dino for 4 fish. You must now place it in your ever expanding park covering at least one blue square. This square can have a fish icon on it, or be blank. Also when placing the dino, the player must take into account final scoring. In the upper right corner of the dino cards, it tells the multiplier for matching food icons it touches (diagonal included) at the end game.

Something to remember, all omnisaurs are the same cost and same scoring. They might look different, but they play the same. When purchasing dinos, be aware of their multiplier. Try to maximize your icons by placing them between like dinos.

The game ends when either the last land tile is placed or the last dinosaur is placed in its new home.

End game scoring then is simply scoring each dinosaur in your park and adding them together. Highest score wins. The tie-break is the player with the most food.

The artwork is very cute. My son loved it. It fit the feel of the game meant for aged 10 and up. All the iconography is easy to read as well.

I worked off a prototype. So, the final production of the tiles could be better than what I worked with. All the tiles were a thick cardstock but not a cardboard or chipboard. This causes the tiles to slide under each other rather easily. However, if they were made of standard chipboard like a normal tile game, when stacked, they could get too high, or tip/slide. I don’t know what the solution is.

Dino Dino plays easy and fast. Explanation of the rules is simple. Being a small box, and not requiring a lot of table space, makes this game ideal to take on vacation or to the restaurant.

Finding the starting tiles would have been easier if they had a different color back. They are two-sided and blank (no starting food icons). Since you are building your own park, there is little to no interaction with your opponents. There is not much you can do to affect their play. Each turn, you must make the best decision for you.

Dino Dino by Bannan Games is a cute, lightweight, tile laying game. The more players you have, the better the game is. It keeps the tiles changing rapidly. The Son and I greatly enjoyed this pocket-sized, low price point, game, and you will, too! 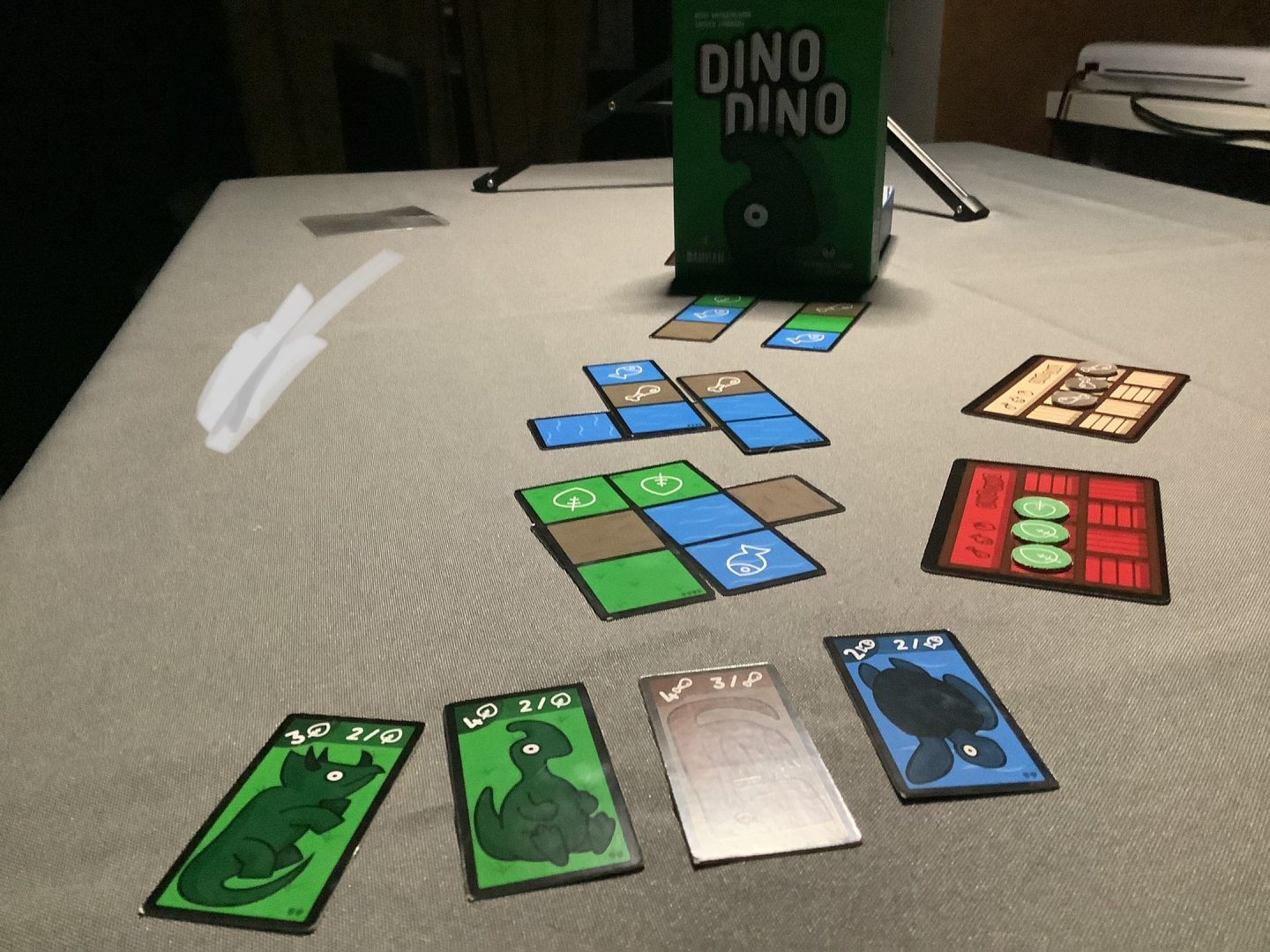 After reading Adam’s review, if this sounds like a game for you at the time of this posting Dino dino will be live on KICKSTARTER starting today! Check it out and back it HERE.
Find out more at BGG.

Did you back it based on our review? Please comment below letting us know!

Check out Dino dino and Bannan Games on: