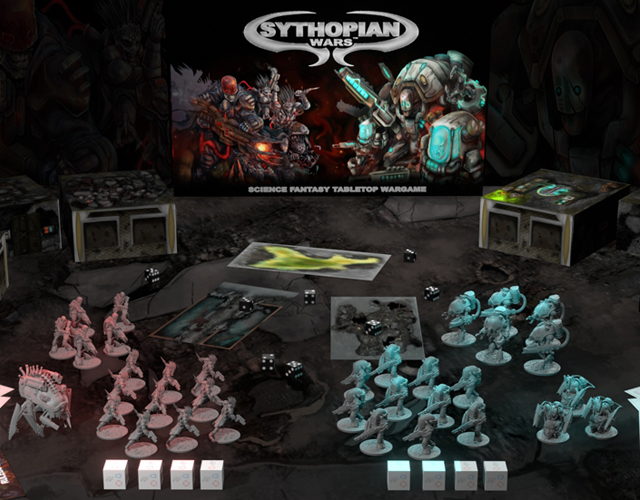 Sythopian Wars is a brand new, science fantasy, tabletop wargame coming to Kickstarter on the 22nd of February 2022.

Players take control of unique armies made up of terrifying miniatures, each with their own distinct rules defined by their lore in this original setting. This fast-paced, brutal wargame rewards tactical play over dice rolls and your ability to act, and react to your opponent’s moves, turning the game into a tactical dance as players shoot simultaneously, dive into cover or charge into the enemy before they can unleash their firepower. Beware however that there are pros and cons to every tactic, as reacting to everything leaves you constantly playing second fiddle to your opponent. With alternating activation, immersive combat and quick to learn basic rules, Sythopian Wars should appeal to both hardened wargamers and newcomers alike. Sythopian Wars, in the beginning, the world ended!

Disclaimer: The publisher provided the prototype copy of Sythopian Wars. The opinions expressed in the review are completely my own. 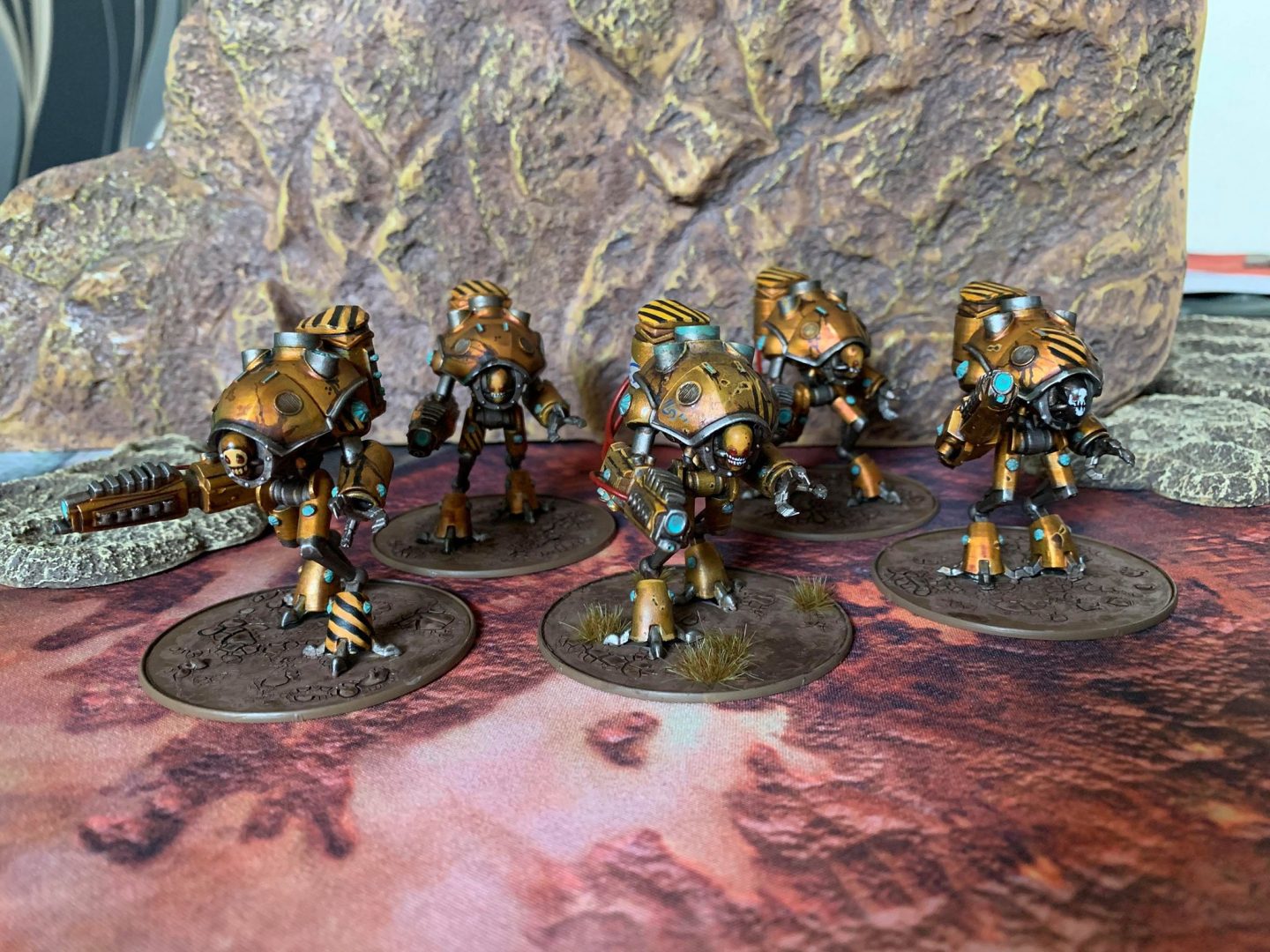 Minis, Minis, MINIS, and this game also is jam packed with MINIS! Keep the 3D printing revolution coming.  I am talking about Sythopian Wars by the Jump Brothers.   This review is for the miniature war gaming enthusiasts that aren’t from the historian breed of players where there has to be the right type of shovel mounted to the LEFT side of the tank as it was done officially (in real life) in the 40s. No, this is all about artistic, fantasy based, awesome looking designed figures that drop some heavy damage onto your *** every round. Those shovels now have electron censored energy blast modules with ballistic slug projectiles on them. Ok you get the point.

Before you begin, you establish the amount of “Threat Points” you wish to play which gives you the number of units you and your opponent field on the board to keep things as balanced as possible and within the time table you wish to play. Though I like the concept of balanced war gaming, life is rarely that and winning with an underdog squad based on map placement strategy and a little luck of the die is soooooo much more rewarding.  It also can cause you to quickly lose faster than your allowance at the arcade in the 80’s!

The designers include in the rulebook a number of common scenarios and victory conditions that help newer players change up game play each session. While they are not revolutionary in design, it allows for special rules to be added within each to provide a change up in strategy that normally comes with simple opponent elimination of all units as the sole focus. 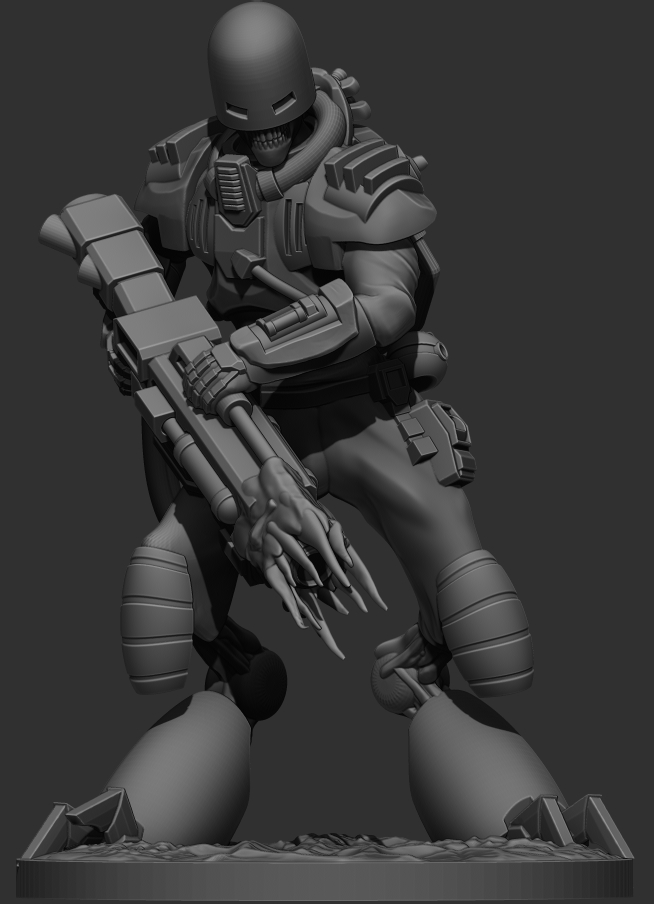 Each ACTION taken by unit groups once deployed is considered a “Command” in this game and happens in an alternating style game play where each player performs 1 of 12 commands.  After each command, a specific marker is placed next to the unit.  This mechanic is a bit unique as there isn’t a swarm of tokens laid upon the bases destined for error like many play structures.  A single die is issued by applying a “restriction” onto the units that took action or command with each side of the die representing symbols of that chosen action and subsequent restriction.   You march your troops out based on the number of these command points (dice) you possess in the game each turn.

You can easily make out and interpret some of these basics if you have ever spent any time in a basic boot camp of wargaming and the rules provide the basic understanding of its action. Some of the highlights of the others that give a more tactical feel to the game include the intervene, rally, and snap fire commands. As I reviewed their mechanics and worked through the scenarios, I found the designers disrupting normal outcomes of an average war game on the market.  For instance, a specific rule that says all attacks through one of these commands happen instantaneously by both sides  EXCEPT a unit that triggered the reaction gains the initiative when rolling for target lock. Target lock being the way you first “AIM” with the unit before Firing for a hit with dice vs their defensive dice roll.  If the unit rolls a ONE on the target roll it can IMMEDIATELY resolve any damage to a unit before they can retaliate.  Simply put – yes, it is simultaneously unless I get a one on my targeting, then it is ME FIRST!  I do think it provides a layer of timing value to all battles that could turn the tides if one is lucky enough to roll the normally dreaded single spot on the die.  1s are good in Targeting only!

This is a bit counterintuitive but was accepted until I got to the follow up hit phase where you then reverse the math and SIXES are now the sought after number vs each opponents armor known as “Resolve”.  The back and forth does honestly get a bit easier as game plays on. So it just becomes another game system change you get used to the more you play.  Rate of Fire (RoF) plays a part in Sythopian Wars with increased chances to eliminate units with more dice rolling per turn. A RoF of 2 means twice the dice and we love rolling dice! 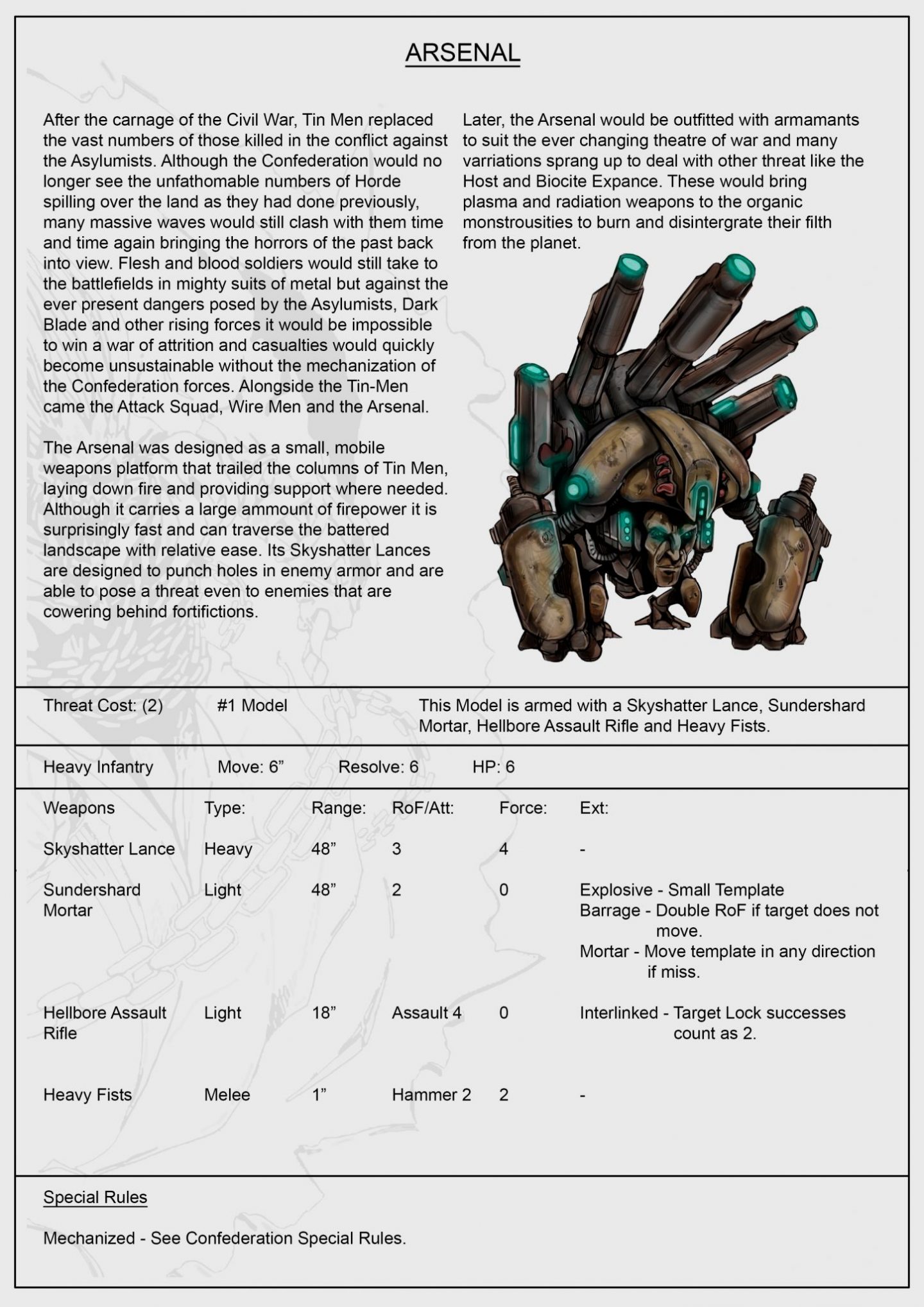 Another tinkering of the traditional rule base in wargaming is the damage dealt.  It gets distributed to one unit at a time reducing their hit points to zero per successful hit. Any hit totals that do not remove a miniature from play are added by that dreaded follow along die and left behind it signifying the damage it took that turn. The attack then concludes with a unique requirement that the “Wounded” unit, with the damage die, becomes stunned.  This forces the attacked player to put the unit on its side representing the concussive reaction to the blistering of lead and energy bolts littering the landscape along with the hit they just received.  Hmmm. Interesting add. 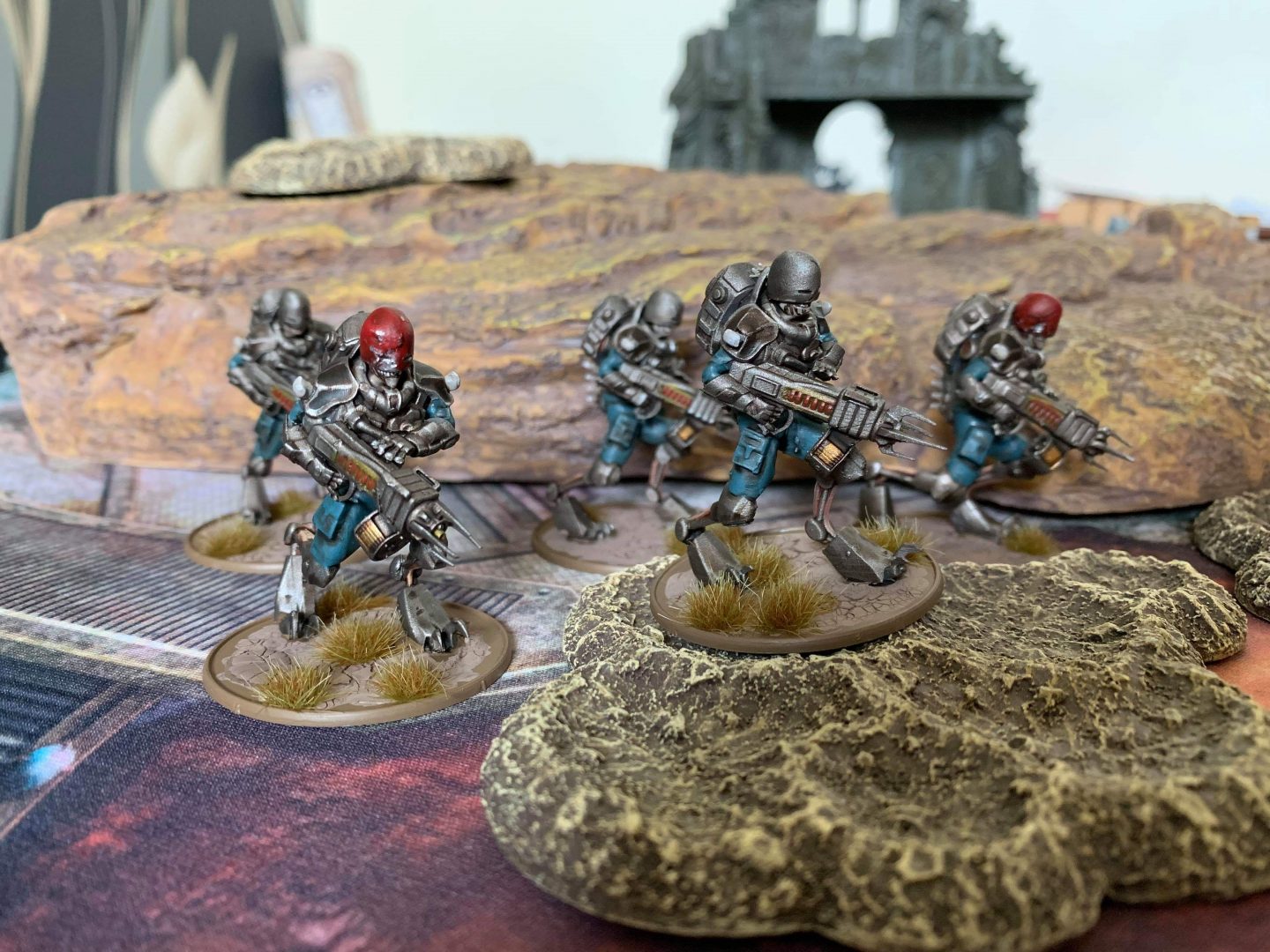 Finally, outside the norm of the back and forth play common to most all games of this style is how the miniature must be able to stand on its base when final placement is made on, around, over, or questionably ensconced on a RUIN. This is known as a piece of terrain or obstacle on the map that provides advantage or cover for line of site.  If in placing the miniature it “falls over” you have to move it to stable ground but then after doing so and upon completing its units command action, if the miniature again falls over it immediately suffers one point of damage and is stunned.  I was not able to recreate or understand how this rather odd but fascinating feature was to happen but I am sure it has and with great fan fair by the opposing player…. No you can’t Tilt the table like a Pinball Wizard to force this fall.  That is cause for banishment to the depths of Sythopian Hell, which after finding nothing googling the name for some historic definition or meaning of “Sythopian”, might just be called HOME. 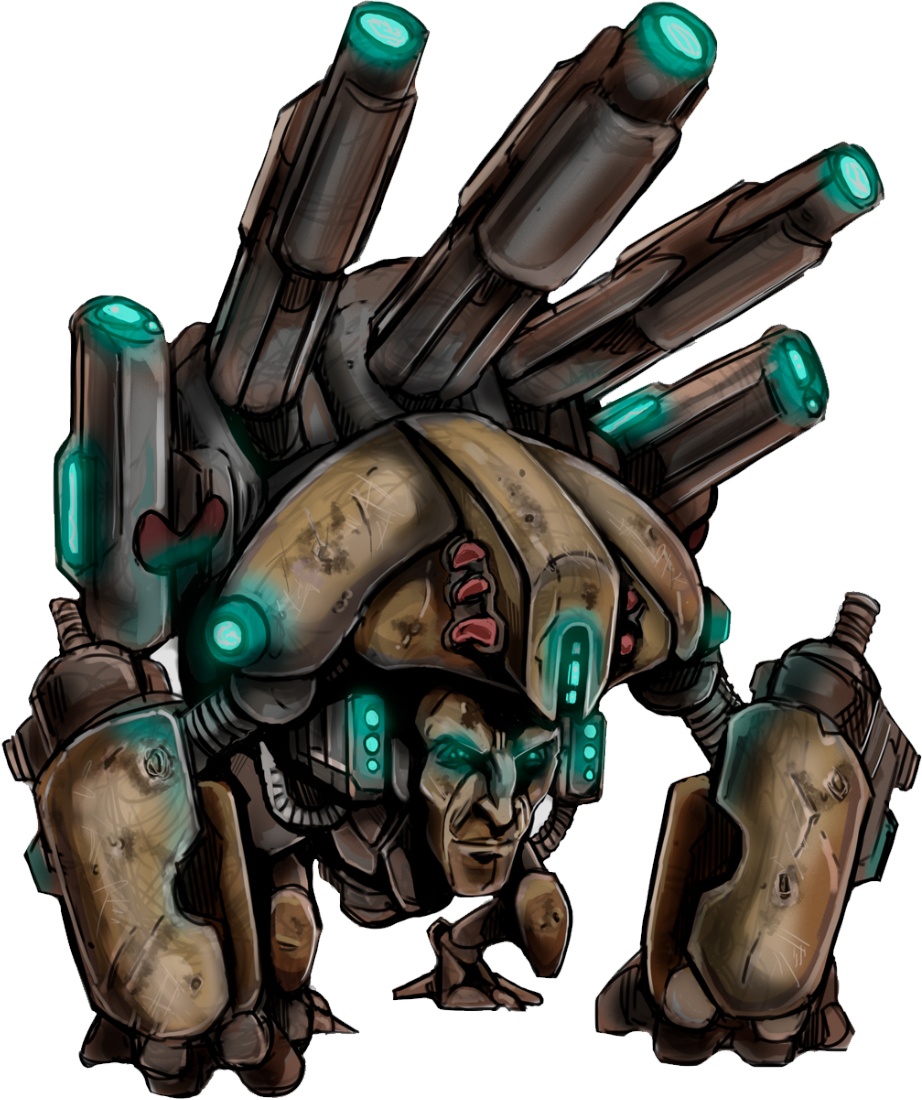 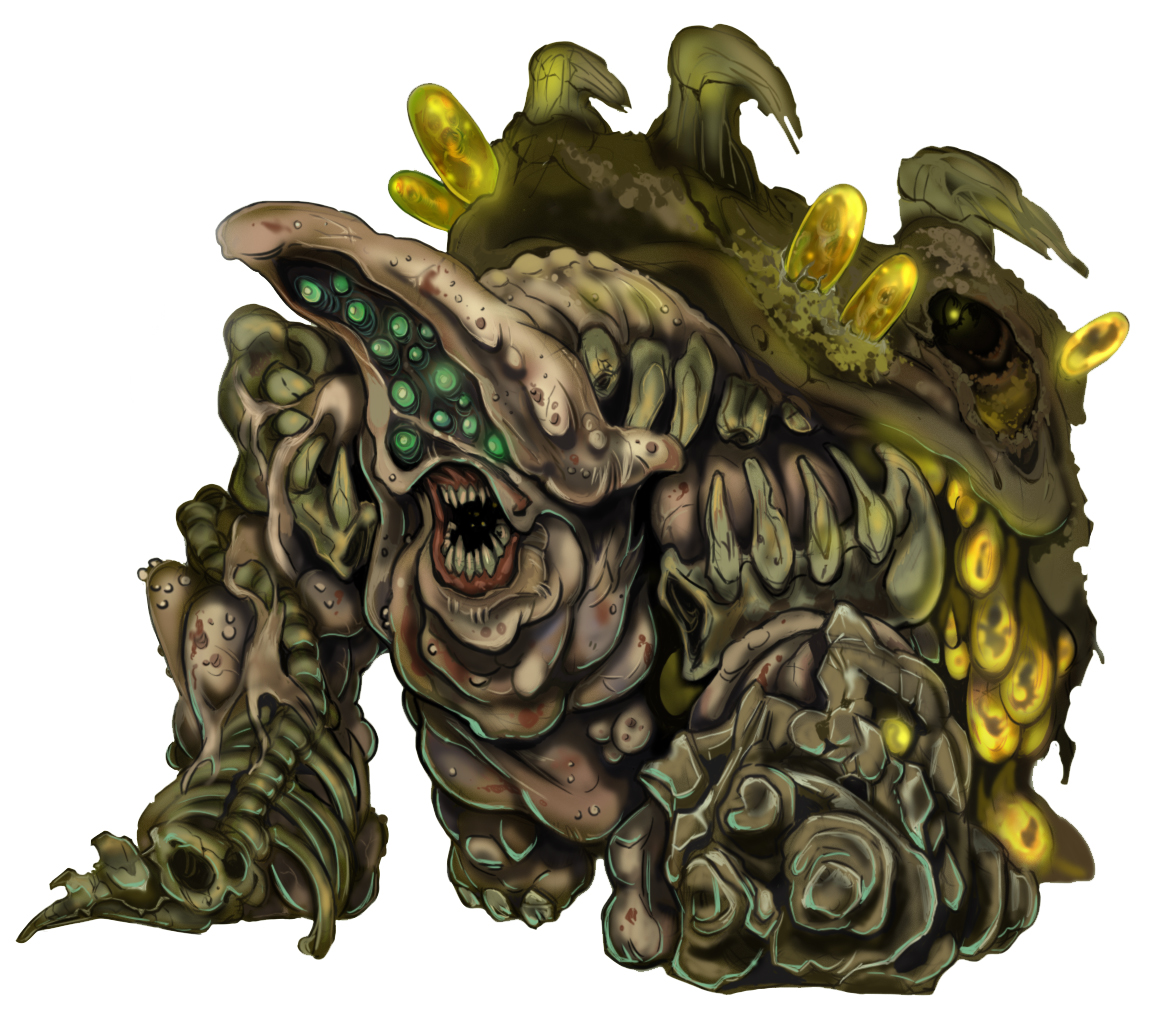 I chose to take on this review as I was impressed by the artistry and the miniature designs of this game.  And from what I see, it’s just the beginning of multiple factions being developed by the team and the play-through was what I expected with a few twists mentioned above that did give it a differentiator to many like it.  I am a fan of how these two brothers work together and even more impressed by how they think.  The creativity makes me want more LORE, maybe even a line of action figures to fight my stash of G.I. Joes awaiting their turn like every other IP these days to fight the zombie horde or now the Sythopian realm. If you are a Warhammer fan, not just of the game play, but the beauty that is in the physical designs and imaginative units that are churned out by Games Workshop, then you will absolutely love this creation. You may even want to take on some or all of its ruleset with your other collections as it brings a bit of a spin and fresh approach to the units based wargaming model. Now I shall inject my image upon their race as the supreme god whom they pray to for strength in every battle! 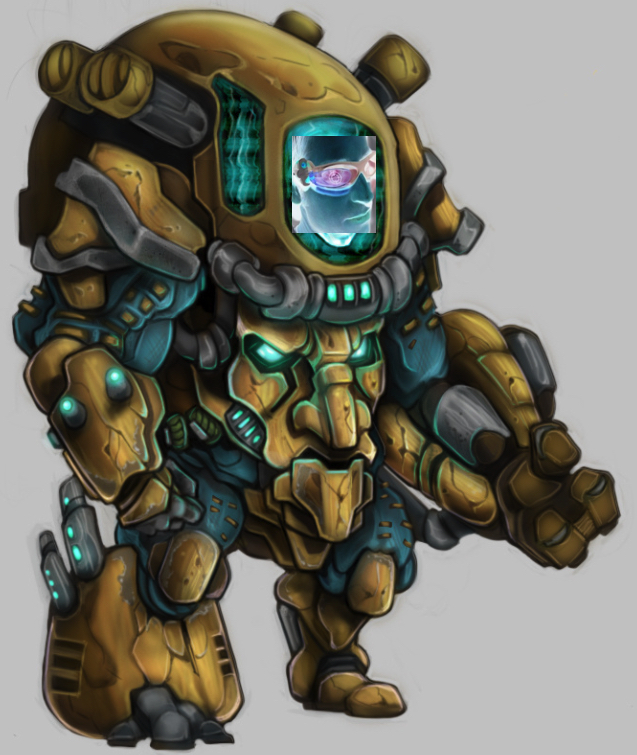 Bogue
“Supreme God to the Sythopians” 🙂
After reading Bogue’s review, if this sounds like a game for you at the time of this posting Sythopian Wars will be live on KICKSTARTER beginning Tue, February 22 2022. Check it out and make sure to get notified upon launch HERE.
Find out more at BGG.
Did you back it based on our review? Please comment below letting us know!