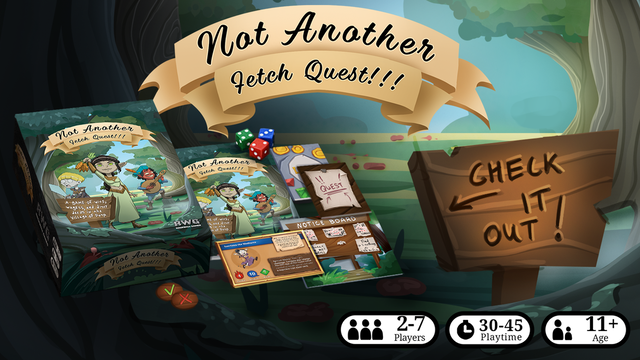 Another Fetch Quest!!! is a wildly fun and witty, yet tactically nuanced, game with a central mechanic akin to liar’s dice. Players take turns adding quests to the notice board until someone is challenged. If the player can overcome the challenge, they succeed; if not, they fail. Three successes wins the game, while three failures earns an exit. Players can also use loot to assist in their challenges, and competitive modes allow players to use loot against others.

Adding to the fun is the theme of the game. The underdog, would-be heroes of the village of Dorp are featured on 99 quest cards (and the loot!) that are individually illustrated by a team of talented artists on Fiverr from across the world. Some of the illustrations include geek culture Easter eggs, including Quest for the Holy Grail, Star Trek, The Legend of Zelda, and Catan. There are also pop culture references, including Rick Flair, Tom Morello, and the “For Dummies” book series.

This is the first game from RockWall Games, an indie developer from Washington State, and it’s live on Kickstarter now. Check out the link below now and pledge for a copy, or pledge to make a quest or loot card of your own to add to the game!

Not Another Fetch Quest!!! will be live on KICKSTARTER until Wed, March 2 2022 12:10 AM PST, and has a funding goal of $10,000.
Find out more at BGG.
Check back here to see what Harry thought in his Video Review as soon as it becomes available!!!
Want our most important news delivered to your inbox at least twice a week????? Just fill out the following and submit. It’s that EASY!
Never Miss Everything Board Game posts again! Get them in your inbox: