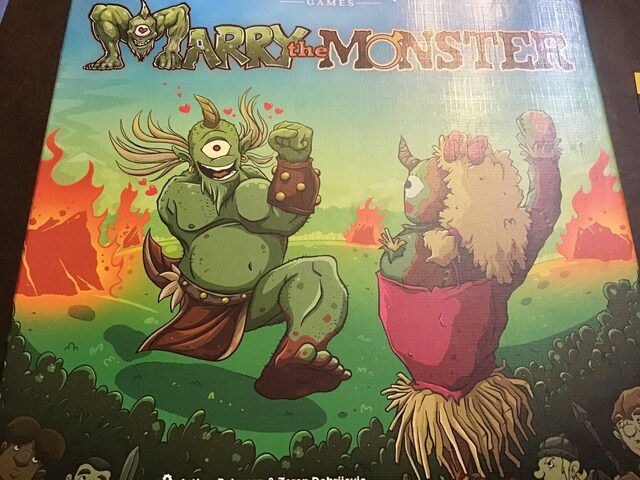 No. of Players: 3-5
Ages: 14+
Playing Time: 30-45 minutes.
Find more info on BoardGameGeek.com
From the Publisher:
You are a duke trying to build up your lands where the monstrous fachan is rampaging. But he is just lonely. Your cunning plan is to make a false bride for him just behind your rivals’ buildings. The love-struck monster will crash through the other dukes’ lands, destroying them, while you continue to build up yours!
Marry the Monster is a game for 3 to 5 players in which each player scores points by building structures and having them remain until your next turn without being destroyed by the monster. Turns are taken by playing cards, and there is no upkeep phase – play simply continues until there is a winner.’
Disclaimer: The publisher provided the copy of Marry the Monster. The opinions expressed in the review are completely my own. 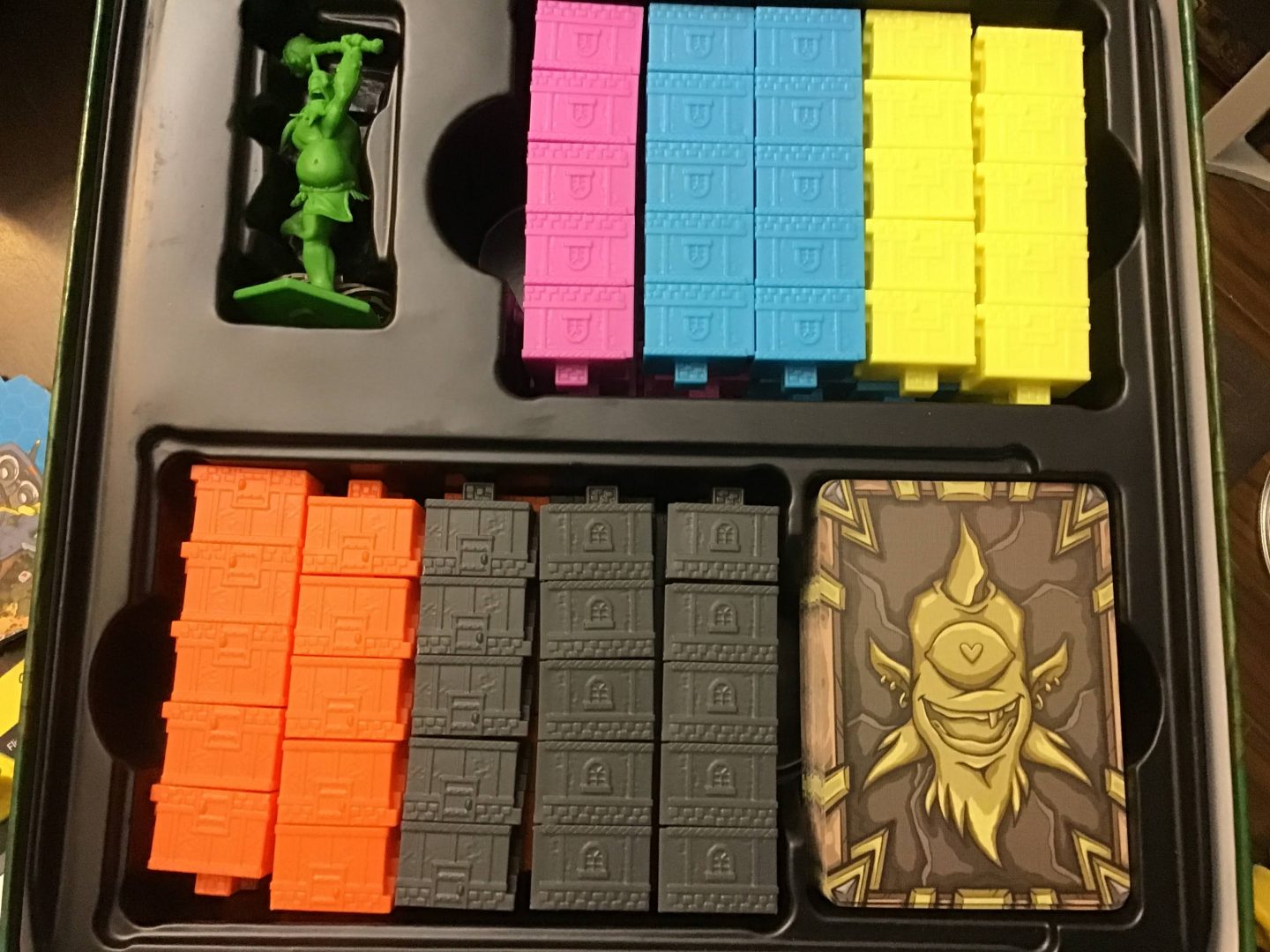 Hot-on-the-heels after my first review (Potions and Profits) of Petersen’s Monster Invasion series, Marry the Monster is the next game in the set that I am handling.

Marry The Monster centers around players acting as power-hungry dukes, hoping to take advantage of the giant green fachan that is rampaging throughout the lands. Through cunning, you have discovered that the foul beast is only tearing up the lands in search of a mate—if you can somehow make a decoy in one of your buildings, he will tear up the buildings of your rivals in attempt to reach your lure.

Whoever is the first to have a total of 45 points AND Three Towers wins the game!

Well thankfully it is very much so! 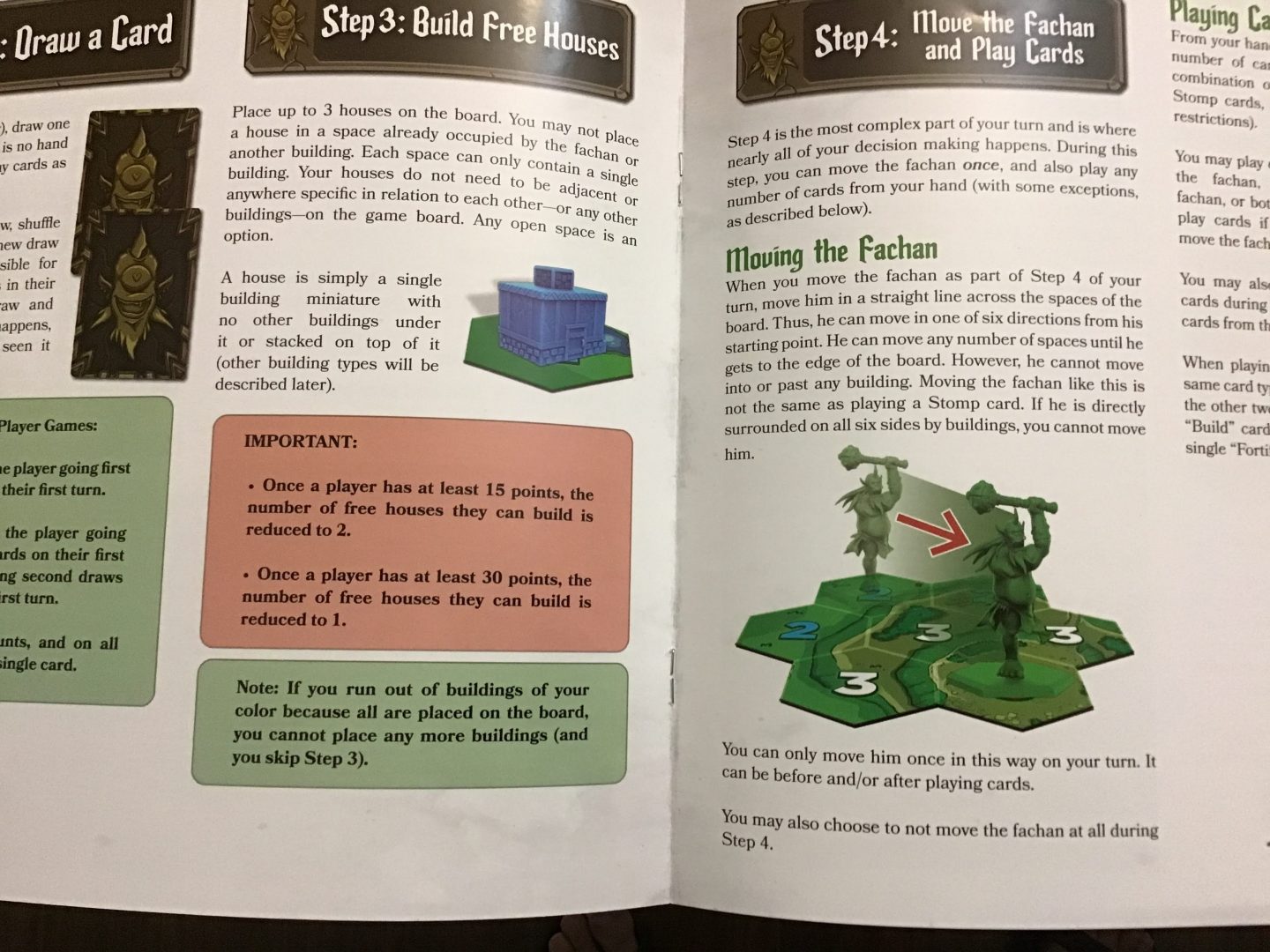 At the start of the game, players begin with nothing but three cards. Usually, at the start of each round, players will score points based on the number of buildings they possess, as well as where the building is located on the map. Some locations are worth just 1 point, while others are worth up to 5!

On their first turn, each player has an opportunity to start their turn by placing up to three single “blocks” (representing a single building) anywhere onto various numbered locations on the board. The turn will then proceed to the player drawing a card. They may then proceed to either move the fachan in a straight line for free and/or use any and all, cards in their possession, or none, depending on their strategy.

Cards consist of the following :

Build : You can construct 1 building for free, and place it on an empty space on the map. 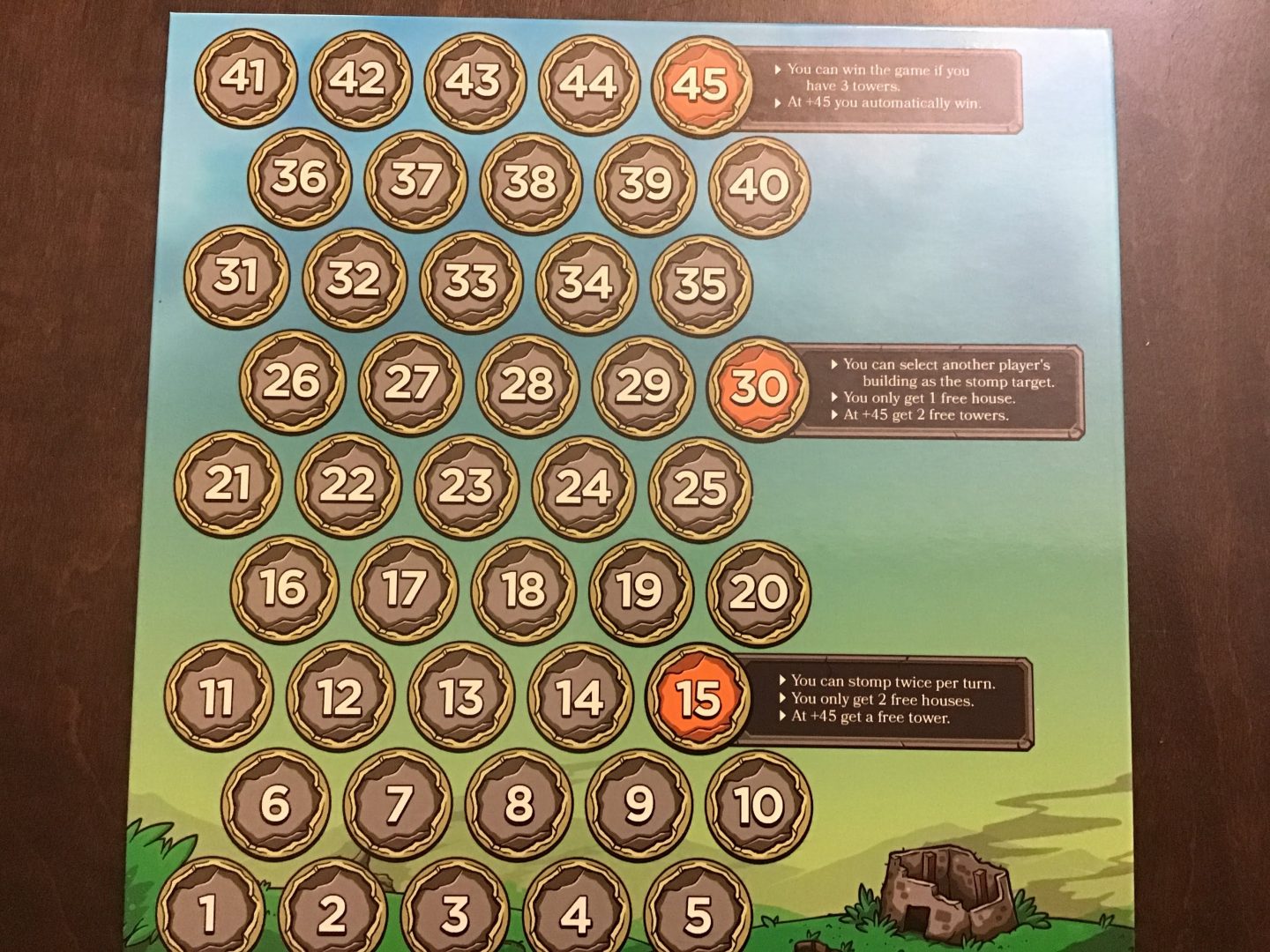 Fortify : You can upgrade a regular building to a “Manor”, or a Manor to a “Tower” by stacking buildings of their own color together using excess pieces from your pile. The best part about this is the pieces interlock very solidly with zero risk of falling apart!

Stomp : You can create a decoy mate for the fachan, which is represented by a big one-eyed, one-legged, non-flying , non-purple people eater miniature. You must then select which of your buildings that will house the decoy. The fachan will then proceed to move in a straight line and destroy any buildings in its path while en route to your building—including yours! Playing multiple stomp cards as a part of the same action also allows you to destroy buildings that are better fortified.

So what is the value in destroying your own building you might ask?

Well, this is explained in the next step.

Based on the number of buildings that are destroyed, the player will then draw cards equivalent to the number of buildings that were destroyed. It is essential to have a large number of cards, because destroying Manors and Towers requires multiple Stomp cards to destroy—if you only have one Stomp card for example, the fachan will not be able to move through an enemy Manor, and will simply stop there. And preventing the rival dukes from getting Towers is part of the objective, after all, so you want enough Stomp cards to be able to handle any obstructions possible! 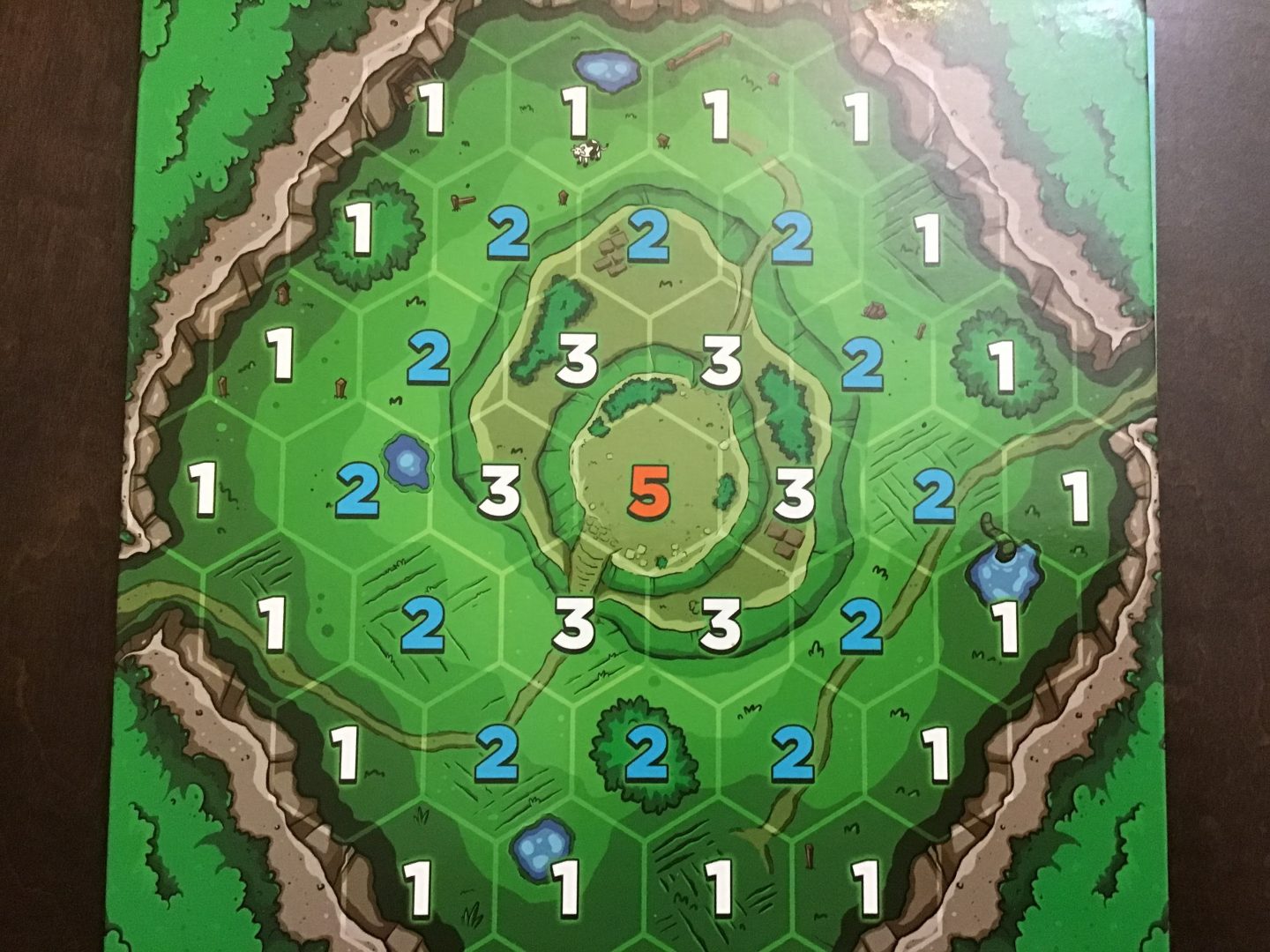 Play then proceeds to the next player, and so on until the game is over.

There are some extra little perks to scoring points in this game, to keep things interesting. After a player has 15 points for example, they only get 2 free buildings per turn, but may also stomp two time per turn instead of the normal 1. At 30 points, you can select another player’s building as the target of a Stomp instead of your own, but only get one free house/building per turn. And a few other little bonuses for players who want to play a game with a higher winning score requirement (90 points).

This is a surprisingly fun game. Although simple in concept and mechanics, it is unique in the use of the fachan, and should be a hit with most all ages. In fact, when compared to Potions and Profits, (which quoted a stated a recommended age of 8+, we found that Marry the Monster is much more accessible to younger ages—we can’t figure exactly why they specify Marry the Monster being a game for ages 14+ when our six year old had no problem with it. Maybe the publisher finds the topic of raging, hormonally imbalanced giants too provocative for such young ages? Who knows?

With that said, the only negative thing worth mentioning for us was that we all felt the main player board could be a tad larger, as it could be sometimes difficult placing buildings within the clutter of limited play space.

The game itself is very fun and fast though. I could easily envision this game being faithfully used in after-school care programs for kids like I used to direct. I know for sure this is one game we will be playing multiple times with the family for it’s easy-to-grasp but nevertheless (mild) strategic possibilities. 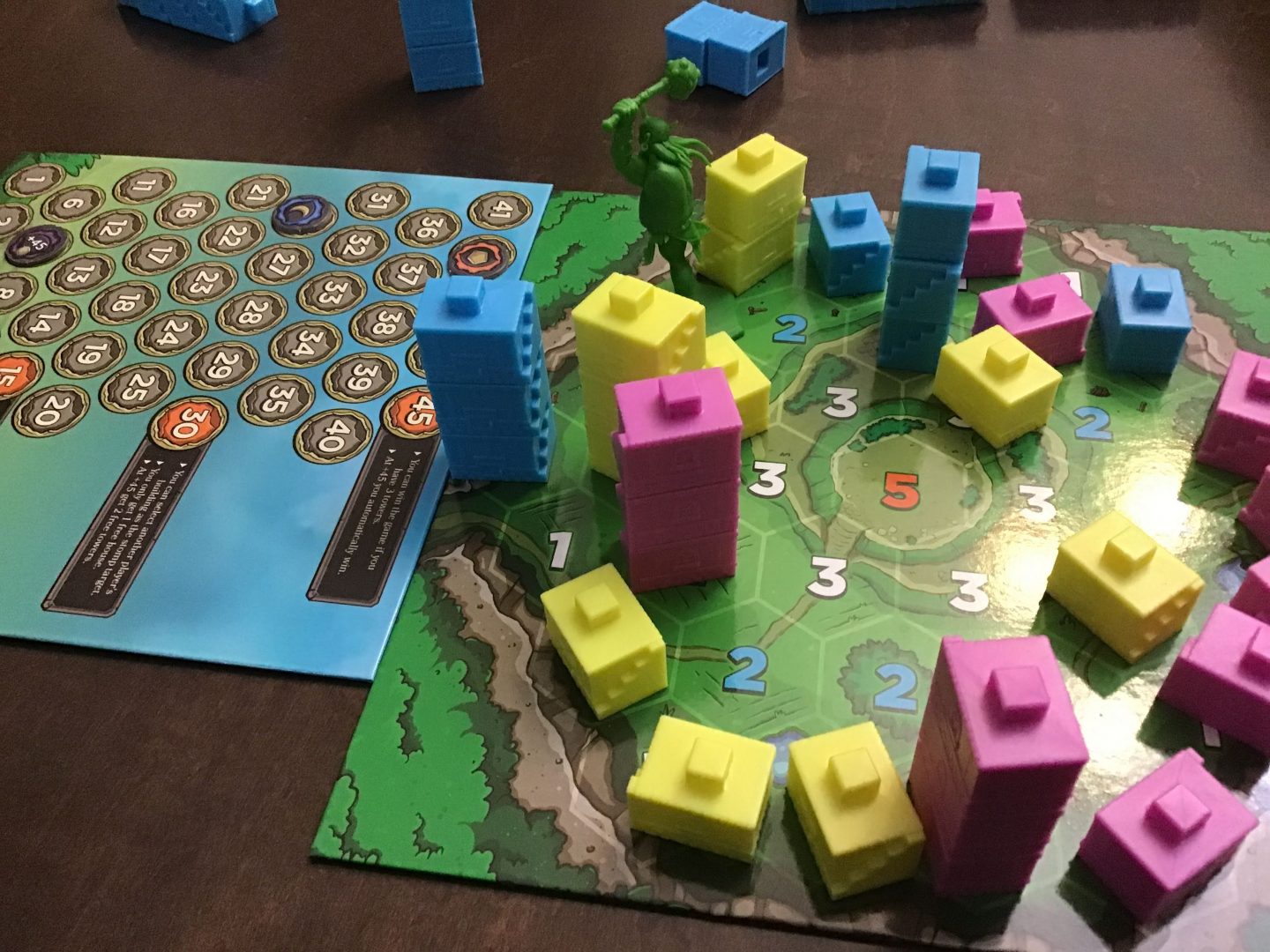 Card stock, materials, and construction are all top-notch, but the building blocks really steal the show—perhaps there is a future competitor to Legos in the making at Petersen Games? Best of all, all of the materials for the game store neatly away in a wonderful insert that holds everything tidily in place and without risk of being shuffled around in the box.

For the final score? You will need to wait and check out the next edition of Everything Board Games magazine, where all 4 of the Monster Invasion games from Petersen are being pitted together in a battle royale to see just which monster game comes out on top!

After reading Jazz’s review, if this sounds like a game for you at the time of this posting Marry the Monster is available for purchase, check it out and get it HERE.
Find out more at BGG.
Did you get it based on our review? Please comment below letting us know!