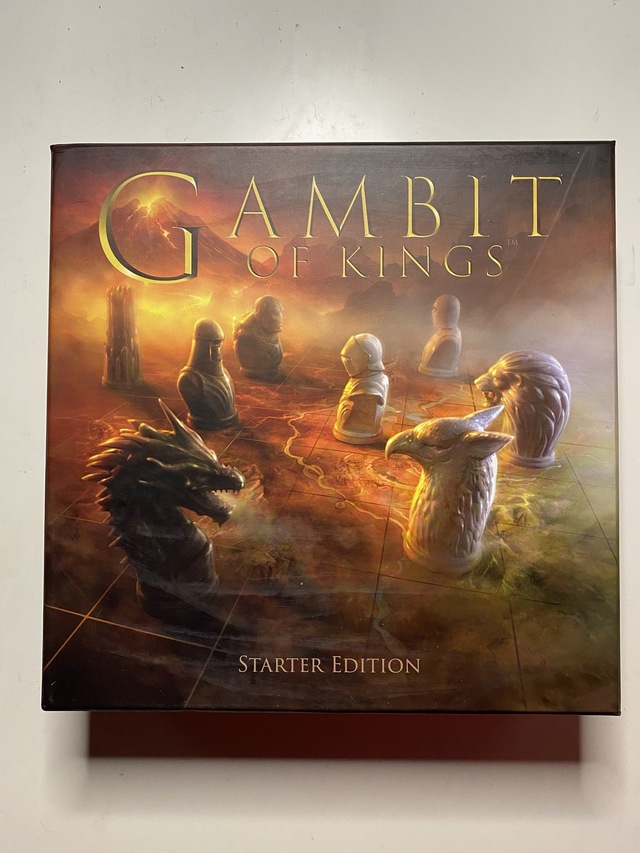 Gambit of Kings is an exciting game of strategy and conquest! It combines the classic feel of chess with the atmosphere of a medieval fantasy world. You must use strategy and cunning to lead your armies to victory and overtake your opponent’s castle!

Players can choose to play with the standard gameboard setup or customize the board with new and unique game pieces from expansion packs.

Disclaimer: The publisher provided the prototype copy of  Gambit of Kings. The opinions expressed in the review are completely my own.

As you probably know, because I mention it all the time, my son is my main opponent. He is also my main playtesting buddy. When games are specifically designed for 2-players, it draws my attention immediately. So, when a chess looking game (my son is really into chess) came across my eyes, I couldn’t help but give it a try. Add in the shorter playtime of 20-60 minutes, I was hooked. The cool box art looked amazing and solidified my need to give Gambit of Kings by The First Edition Gaming Company a try. It was worth it.

The rules are very straightforward and easy to understand. Like in chess, each of the 8 pieces move in a specific and different way. Every piece has an opposite-but-equal piece on the other side. So, the King of the Light has a Soldier, while the Exiled King of the Dark has a skeleton. They both move and can capture one space forward or horizontal. They cannot go backwards, but they can move forward two spaces if the space is open. They cannot capture if moving forward two spaces. One key difference from chess, however, is that the Castle cannot move. It is in the middle of the back row, and it remains there the entire game. The game comes with a nice rule book but also with an extra page of the movements. I love this, as it gives both players a reference sheet for the first few games.

The set up is much like chess. It is a fixed set up, with all the lesser pieces in the front row protecting the greater pieces and the Castle in the back row. The setup is provided in the rule book. Each player sets up a mirror of the other. Once all 20 pieces are in their corresponding spots on the board, select a player to go first however you see fit, and let play being!

The theme is a bit pasted on. The King of the Light is battling the King of the Dark. Why are they battling? Why do I care? I appreciate the backstory enough, but it is not what drew me to the game. The mechanics drew me to the game. It looked like chess, but not chess. The game plays like chess, but with different pieces moving in different ways. For some reason, this really resonated with me. Growing up, chess never attracted me. I played a little, got beat all the time, and never really got into it. Since that time, I have grown up, and grown to appreciate chess for the masterpiece it is. I like that Gambit of Kings added new ideas to it. It is refreshing.

As you can probably guess, Gambit of Kings plays just like chess. One player moves one piece. Then, the other player moves one piece. Back and forth it goes until someone captures/destroys the immobile Castle of the other player. This does add a layer of strategy. As the opponent, you do not have to worry about shutting down flight squares for the Castle. On the other side of things, you have to leave people behind to protect your Castle as you move your army forth to raze your opponent’s Castle. If you like chess, the basics are there. Setting up for two or three (or more if you are good) moves ahead, double attacking, protecting pieces, pinning pieces, etc. You just have a completely new set of rules to play by.

The beautiful box art draws your attention to this game. Sadly, the pieces in the box are not that detailed, or detailed at all. They are, however, sturdy wall-like tokens reminiscent of Stratego. You place matching stickers on each side of a wall/piece to mark it as a specific unit. The board’s fantasy elements also work to draw you in. The board is nice and thick chipboard. The rules are on a nice weight paper. The added extra reference sheet for the movement is a nice touch. It allows each player to have their own, which will speed up gameplay as you don’t have to pass one back and forth. Not having the movement pictured on the board was a good move, too. It would have cluttered the elegant artwork. 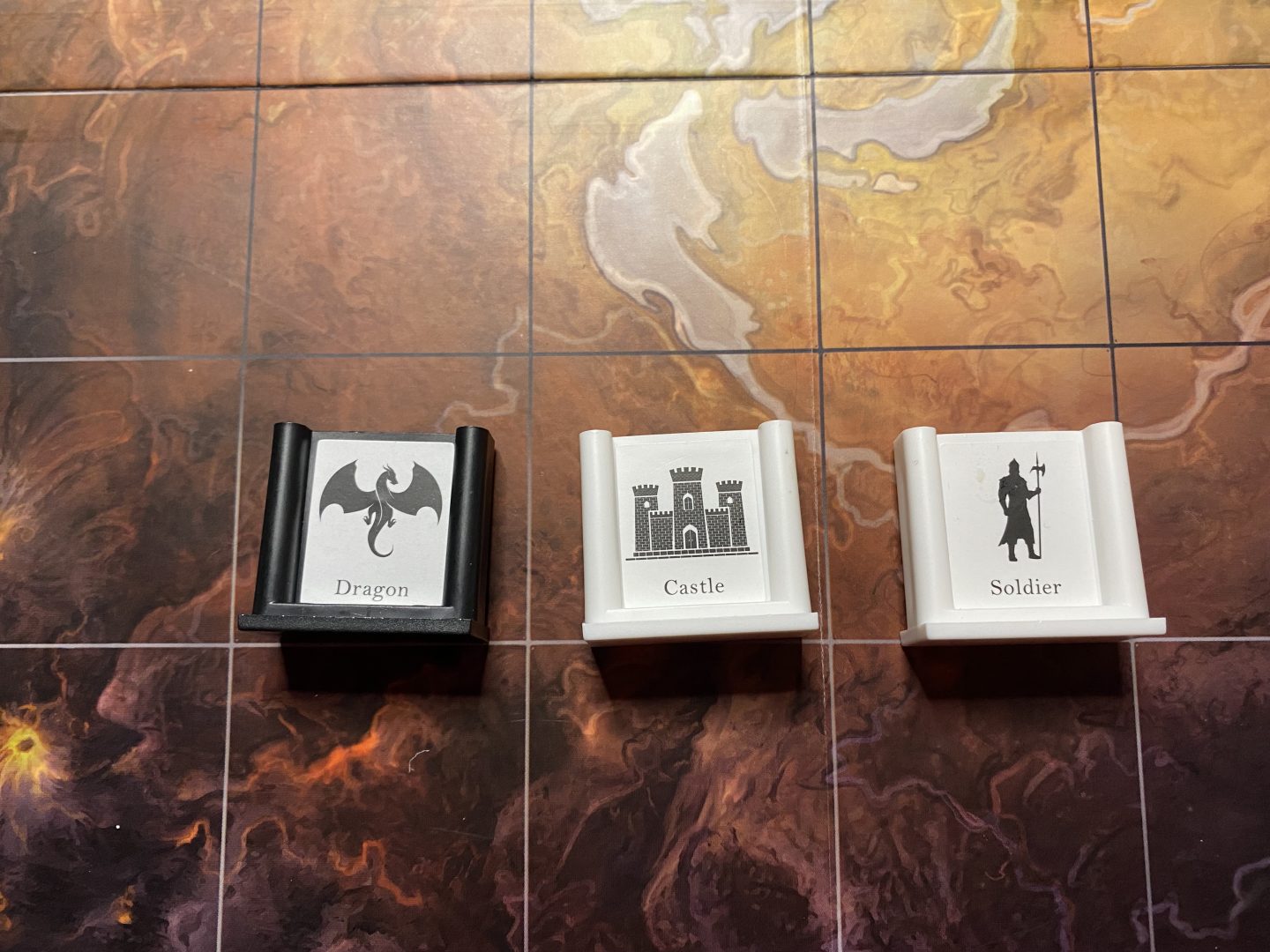 Where to start! I cannot say it any clearer than, Gambit of Kings is an enthralling game. Yes, it is very similar to chess, but it differs enough. By not being chess, Gambit of Kings is free to do what it wants. The box is labeled as “Starter Edition.” When I asked designer Michael Stutz what he had in store for the game, he said he has expansions packs with dice, cards, and possibly even molded pieces that look like the ones on the box. So, here’s hoping that Gambit of Kings finds the success needed to bring these ideas and components to life.

My son played in a lot of chess tournaments (pre-COVID), and we would always take a few games to play in between rounds. I would take a few smaller games and play with him and the other kids. I cannot wait to take this once they start back up. Any game of this design helps build strategic thinking, and I appreciate that.

Honestly, the game is smooth. I only have three minor complaints. First, the box art looked to promise really detailed pieces that are not in the box. I was looking forward to highly detailed pieces. Sadly, we got Stratego-esque walls. Next, I wish that the stickers for the King of the Dark’s army were black with white silhouettes and lettering. Lastly, I think that making the backside sticker the movement of that piece would alleviate the need for the reference sheets. All of these are minor and have nothing to do with the gameplay itself.

I don’t want to downplay this. Gambit of Kings is a fantastically fun game. It is different enough from chess to stand on its own merits. As I mentioned before, my son has played chess for years in rated tournaments. He beats me regularly. Sometimes humiliatingly. What drew me to this game was that it gave me a chance to win again. I did not expect to love the game as much as I do. My son loves it, too. It gives him a break from chess and gives him a new set of moves to memorize and maximize to dominate me. There is a lot you can explore with this game, and we have enjoyed it immensely.

After reading Adam’s review, if this sounds like a game for you at the time of this posting Gambit of Kings will be going to KICKSTARTER SOON check it out and sign up for notifications HERE.
Find out more at BGG.

Check out  Gambit of Kings and  The First Edition Gaming Company
on: