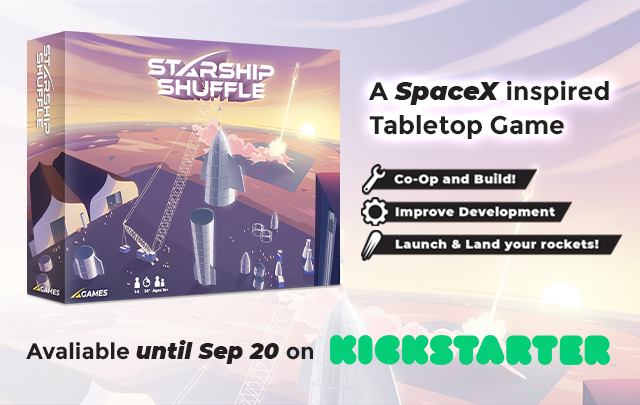 Starship Shuffle – A SpaceX inspired game
Publisher: A-Games
Designers: Curtis Arends, Kyle Arends
Number of Players: 1-5
Ages: 14+
Time: 20-40 Minutes
Find on KICKSTARTER HERE.
Starship Shuffle is a SpaceX inspired tabletop card game, where players collaboratively build, develop and launch a Starship rocket!
After watching Elon Musk’s/SpaceX’s Starship launch in December 2020, our minds kept reliving the magic of the production and testing process.  What a time to be alive and witness history being made. Watching steel rings get welded and stacked, rocket engines installed and static fires… There was more than enough events in the last year to create a compelling game that tells this story, while still providing an intriguing gameplay experience. Humans are heading back to the moon and then onto Mars in the very near future, and we wanted to invite others into this inspiring story that is unfolding!
It started with just normal playing cards sprawled on a table.  Like puzzle pieces, we arranged many different configurations.  Fins, barrels, engines…these rocket cards would be the key elements!  However there was so much more, from robotic welders to cryogenic testing, a development card mechanic was added.  We knew once a Starship was built, players would want to obviously launch it.  This resulted in the Launch Phase, where players attempt to avoid exploding and instead try to achieve success at each critical launch stage. 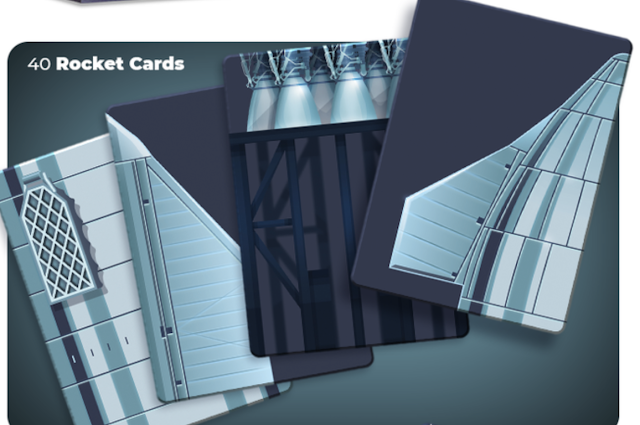 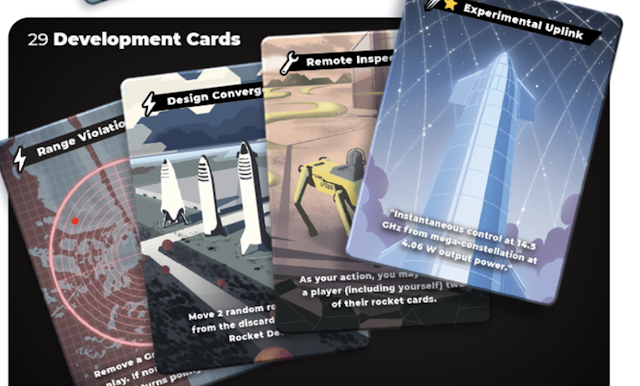 Hundreds of hours and play testers from across the globe have refined the game into a game that captures the Starship story while also being optimized for fun and collaborative strategy.  Illustrations and graphic design are complete; first copies have already been printed. Promo cards illustrated from the members of the board game community and space community have also been created but are only in the Kickstarter print run. See below for a Promo card created by Terraforming Mars illustrator Isaac Fryxelius: 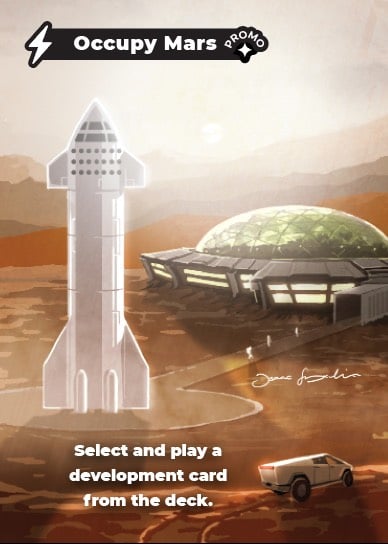 Starship Shuffle definitely is a game that provides a great evening of entertainment for your gaming group. You can tell it was well thought out and that each element was created by individuals who truly love the science and the process of aerospace engineering.

– Shane “Bogue” Bogardus review on Everything Board Games

Starship Shuffle is a uniquely themed card game experience with a clever mixture of unusual mechanics and interactive gameplay. IT’s cooperative nature and nail biting second phase make for a fun filled “blast” of an evening. – Robb and Anna-Marie of the Meeple Dungeon