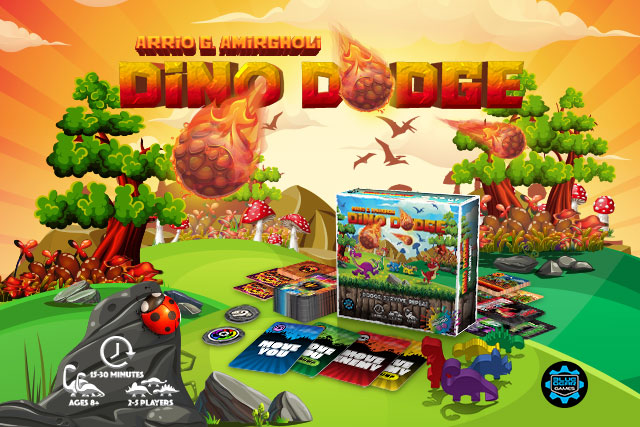 Dino Dodge 🌋
Publisher: Blue Gear Games LLC
Designer: Arrio G. Amirgholi
Number of Players: 2-5
Ages: 8+
Time: 15-30 Minutes
GAMETYPE: Competitive
MECHANICS:
-Take that
-Hand Management
-Free-For-All
RE-PLAYABILITY: Yes
Find on KICKSTARTER HERE.
STORY
65 million years ago, the Earth was dominated by Dinosaurs. They lived together in peace and harmony. Always being kind and courteous to their dino neighbors. That is…until the meteors came…
Now it’s every Dino for themselves! Push, shove and dodge your way out of falling meteors! Do whatever it takes, even if it means moving another player under the meteor, to be the Last Dinosaur on Earth! 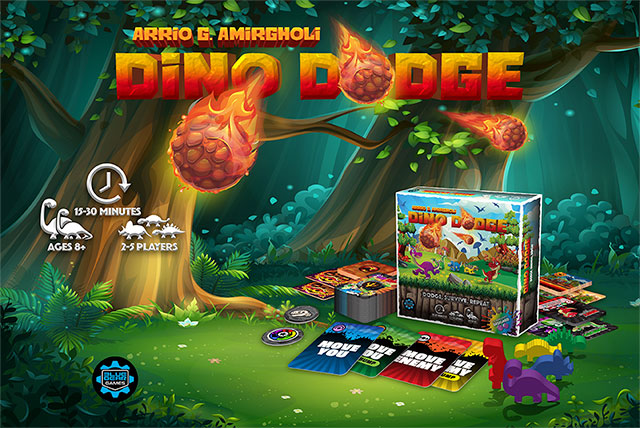 OBJECTIVE
Play Action Cards to dodge falling meteors, move your enemies under meteors and avoid new threats. Meteors fall by utilizing its ticker. Whoever is under a meteor and cannot escape are eliminated from the game.
Manage your hand carefully or leave your fate in the claws of your enemies. Meteors continue to fall and the world turns into lava, as the age of extinction lays way for only one dinosaur left standing!
Dino Dodge 🌋will be live on KICKSTARTER until Thu, August 26 2021 6:00 PM PDT, and has a funding goal of $10,000.
Find out more at BGG.
ENTER THE GIVEAWAY!