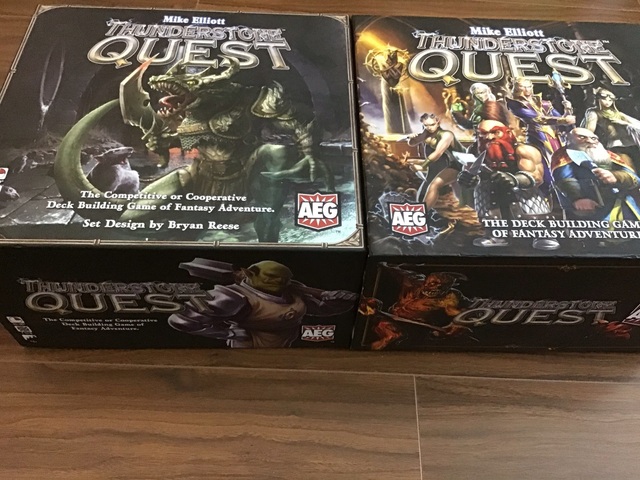 Thunderstone returns with Thunderstone Quest. Recruit your heroes, arm your party, then visit the dungeon — and the dungeon has new perils not seen in prior Thunderstone releases. All-new dungeon tiles create new challenges and rewards as you explore deeper and deeper in the dungeon. Each quest brings new dungeons as well as new side adventures!

Thunderstone is a fantasy deck-building game. Each player starts with a basic deck of cards that they can use to purchase, or upgrade to, other, more powerful cards. Thunderstone Quest brings new play modes to the table. The game will tell a specific story with a series of pre-set dungeon tiles, monsters, heroes and support cards. Each will come with a series of mini-adventures and a story booklet that tells players what happens as they progress through the scenarios.

Once players have completed the quests they will be able to enjoy great replay value with the available selection of monsters, heroes, and support cards, as well as the new dungeon tiles, by choosing random set-ups before the start of play. Aside from heroes such as wizards, fighters, rogues, and clerics, cards will include supplies that heroes need like weapons, spells, items, or light to reach further into the dungeon. 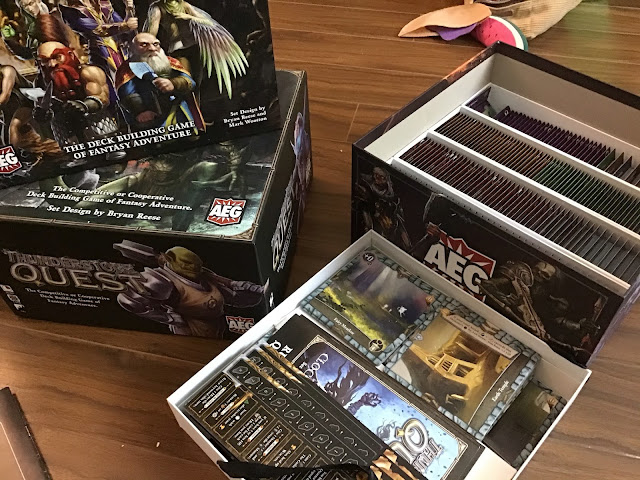 Dungeon crawls – many time those two words accompanied by the next two; Deck Builder puts me into a tail spin of insanity. Watching designers put together the same mechanics with different art and expect a different experience only to let down the buyer of what is usually a high price point mediocre game.  Thunderstone Quest by AEG at first glance gave me those same chills UNTIL I dove into the set up and ran through the first turn.  It is all the juice without the bitterness in a game of this genre. 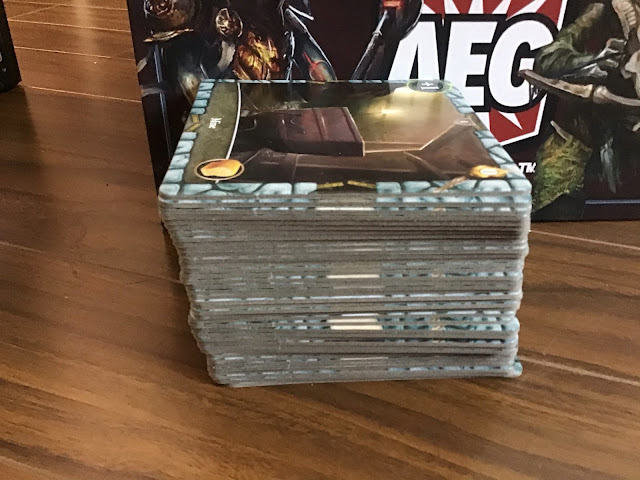 The elements in yet another shelf stealer box is quite impressive at the current price point of $99 for the core set.  The designers even offer unique handles to separate the top layer of love from the bowls of the below level goodies.  It doesn’t quite require the destruction of a redwood for the components just a sapling or a teenage GRUT from Guardians of the Galaxy! It is big and packs a power punch when fully rolled out.

Setup does take the normal elongated time for any dungeon tile based campaign crawl. The artwork for each item is comparable to today’s top level creators with a slight uptick in the quality of the print and color depth that helps deliver on the for-mentioned price point.  The days of first run Dominion is all but removed with the expectation and delivery of today’s designers. Kudos to AEG for keeping that streak alive.

The game works best for 2 to 4 players and the time to play interestingly is what gives this game an edge on an afternoon of game play.  Whether you play with 2 or 4 players, the game time will be about the same given the randomness of the draw of the KEY Cards needed to end the game and the amount of actions each player takes. The more players the fewer actions each player takes.  This is good if you love the slower development of a character or the faster developing *ss kicking delivery within just a few turns. Choose your company numbers carefully with this one based on that mechanic.

The company you keep is also the unique feature that separates this game from the likes of Descent by Fantasy Flight Games or Dice Throne Adventures by Roxley Games both crawls that utilize board tiles and map pieces to extend the game play.  Both games focus on cooperative play to win the game together. Thunderstone Quest incorporates a reliance on one another and the characters each player creates to work to defeat the foes within the campaign, but in the end only one prevails the victor based on the number of tokens collected through their individual turns. So if you like “coopiness” and the comradely of toasting to victory or blaming one another for your defeat, this is NOT your go to entertainment for game night. 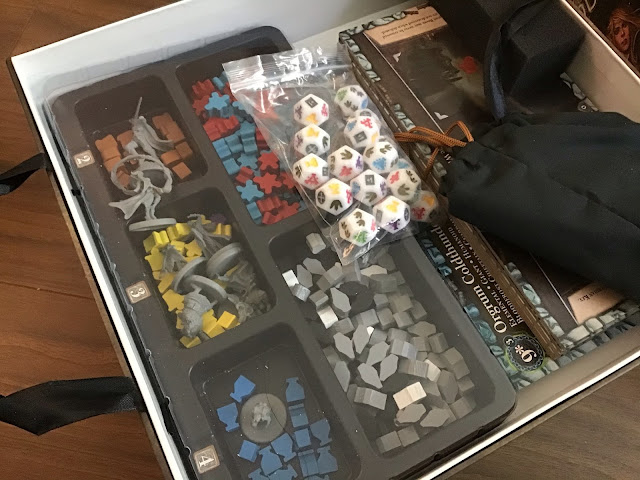 The game is broken up by a Village area and a Dungeon area of play.  You and your pals all start off with absolutely no class and if your game table banter is like mine, then having no class is probably the closest to reality this game will get! You build your class and spell powers as you gain levels and specialty cards bought and drawn with the peached areas. The village is like visiting the mall in the 90’s but without the arcade, shoe stores, and overpriced cookies! Rather the bazaar is filled with iron rations, lanterns, and over priced potions instead to help navigate the risks of war throughout the land. Iron gives you extra gold or weapon upgrade opportunities. Lanterns allow you to not need the elven in the party who can always see and some how explain everything that is happening in detail like a golf announcer at the British Open. Then there is the final option on the supermarket sweep that allows for the purchasing of potions that give you the desperately needed health to continue to shed your card decks that only a master of slight-of-hand could ever do.  As your health decreases so does the amount of cards one can have in their hand to deliver damage, or change the course of destiny each turn. This drawing and discarding of the deck takes place each turn with another special rule requirement that you discard all of your remaining hand at the conclusion of a turn to then draw back up to that health metered number of cards the next time you are green lit to roll play your next turn.

The remaining areas of party travels can lead you to the Guilds Quarters to upgrade your character, The Temple to heal extra wounds, or the almighty and coolest Deck of all: the shop of arcane wonders….That needs to be said in a loud echoEE voice:” THE SHOP OF ARCANE WONDERS!” You hear it right?! 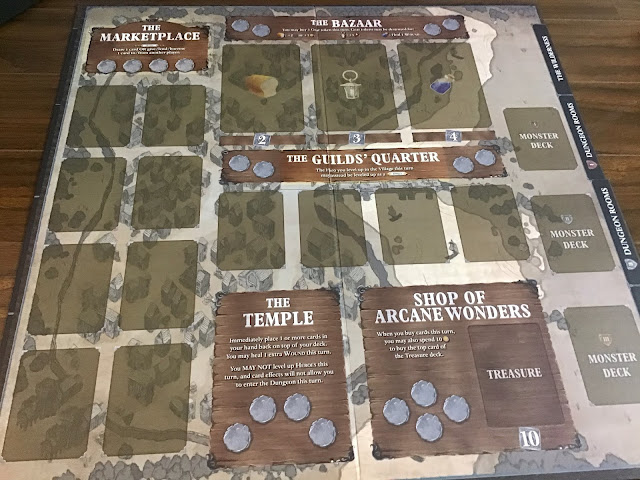 After you finish your mall crawl in the village for sweet booty and maybe encounter some slightly modified brutes, you then can enter the dungeon area. Cue the Japanese koto drum SFX! The dungeon always starts in the wilderness with a minion-like rat battle that you can continually take on like the good ol’days of WACK-A-MOLE at the county fair. When you feel battle ready to take on the foul, chaotic and lawful evilness that awaits in each laid out dungeon room, you and your selfishly upgraded party mates can venture on working to slay the wicked and unfold the decks of cards within to eventually reveal enough key cards to enter the big boss battle neatly hidden behind the minion rat card you become very familiar with. You as a group get one turn with your maxed out characters to drop the climactic beast like that bottle of spirits from your youth when mom walked in. The player with the most tokens gained from gold usage on cards and defeating monsters for treasures, gear, and various other loot cards that all convert to the name sake Thunderstones symbol is declared the winner. 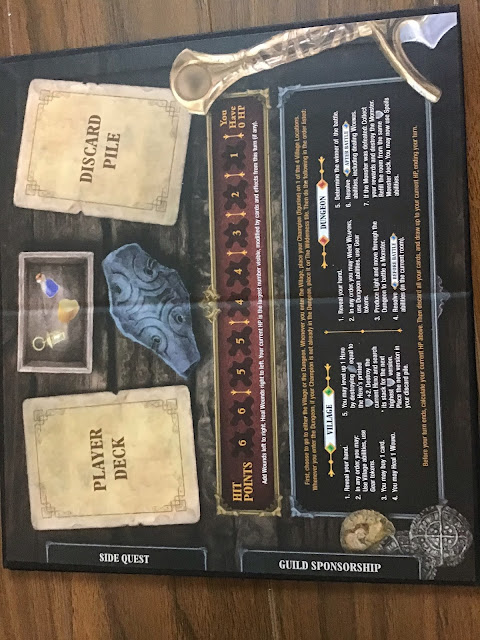 If you, like the great majority of gamers, have that special fetish for roleplaying but wish not to be forced to randomly shout – Pain Cave, Pain Cave, step into my pain cave and I’ll bludgeon you! – No? That is just me? Hmmm. Either way, you will enjoy the campaign connection you will make with your character development and card skill play of Thunderstone Quest. 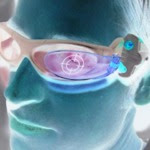