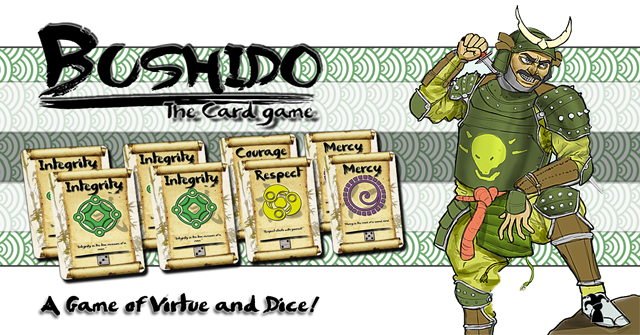 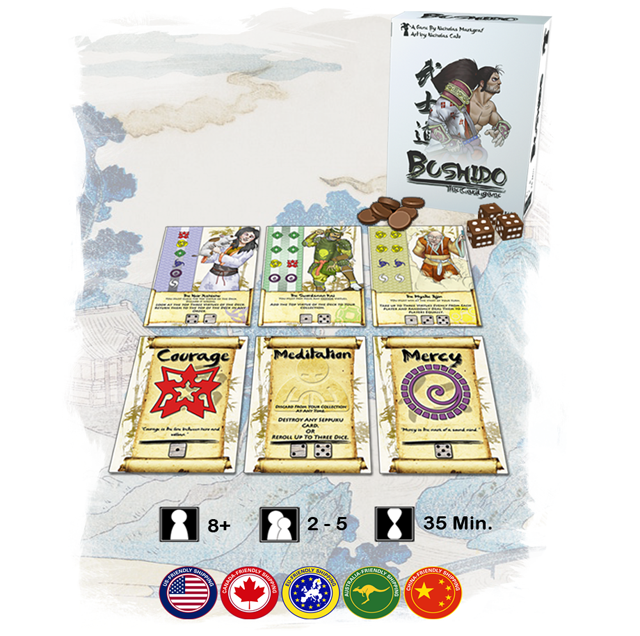 “A Samurai push-your-luck, set collection game for 2-5 players. Take to the Dojo and Roll dice, allocating them to the available Virtues. Learn enough Virtues of the Bushido Code to impress one of the Daimyo in order to win!
For twelve years the Province of Tosa has been blessed with peace and prosperity. Peace and prosperity that has been won through valiant battle and sacrifice have left Tosa with little army yet still what remains defends the earned prosperity. Until sea-faring invaders lay siege to Kochi, a capital port for Tosa, and threatens this lasting peace. With the invaders not willing to negotiate; the Shogun orders his many Daimyo to travel Tosa in search of recruits to train in order to bolster the dwindling ranks of Samurai for the inevitable military confrontation.
Bushido, The Card Game is an interesting blend of push-your-luck and strategy. Each roll of the die will leave you with a decision, collect virtues that are needed to win, or activate Daimyo abilities to alter the game to your advantage. Either decision, however small, will ultimately lead to your victory or demise.
Bushido, The Card Game doesn’t lack interactive gameplay. Many of the Virtue cards dynamically alter the game when collected. Focus tokens can force a player to reroll any die result at any time – and each of the Daimyo has a special ability to help or hinder training!
Compete as samurai potentials to be the first player recruited! 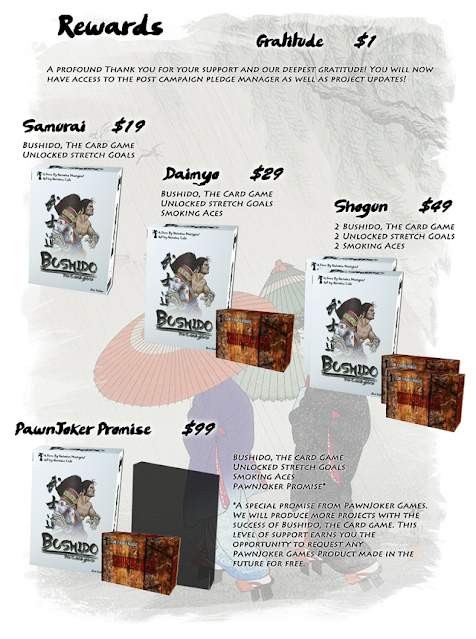 Features of Bushido, the Card Game
Variable Win Conditions. Each Daimyo presents players with a different requirement of Virtues to collect. Players can specialize and focus on a specific Daimyo from the start of the game – ignoring certain Virtues. Or players can generalize and try to appeal to all three Daimyo – ignoring the special abilities the Daimyo provides.
Simple Rules. Learn in less than a minute
Replayability. With six Daimyo each game will have a different combination that requires different strategies!”
Bushido. the Card Game will be live on KICKSTARTER until Sat, July 10 2021 9:25 AM PDT, and has a funding goal of $3,000.
Find out more at BGG.