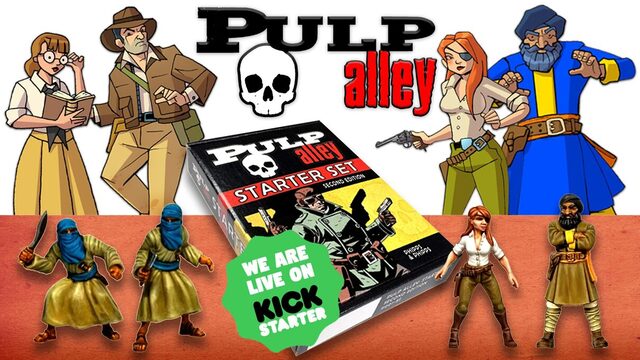 Pulp Alley: Tabletop Game
Publisher: Pulp Alley
Designers: Mila Phipps & David Phipps
Number of Players: 1-4
Ages: 12+
Time: —–
Find on KICKSTARTER HERE.
Pulp Alley plays like your favorite action and adventure stories. The game is designed primarily as a tabletop miniatures skirmish game for 1 to 4 players.  You can play solo, co-op, and versus in any time period, setting, and genre – such as sci-fi, fantasy, horror, old west, and many more.
This kickstarter campaign for the thrilling Pulp Alley tabletop game includes a new boxed set, two new expansion books, and a bunch of awesome new miniatures:

First up we have the new PULP ALLEY STARTER SET. This box is jam-packed with everything two players need to get started on their Pulp Alley adventures!
The new PULP ALLEY CHARACTERS BOOK includes tons of pre-made characters ready to be your colleagues or enemies.
Our new CHINA STATION BOOK has a dozen scenarios that can be played as a stand-alone game or as part of an narrative campaign.
And we have a bunch of exciting NEW MINIATURES – including the Dundee Scholars, Wolf’s Crew, Mercenaries, and new additions to the Sky Pirates!
Pulp Alley: Tabletop Game will be live on KICKSTARTER until Fri, June 18 2021 11:32 PM PDT, and has surpassed it’s funding goal of $1,500.
Find out more at BGG.