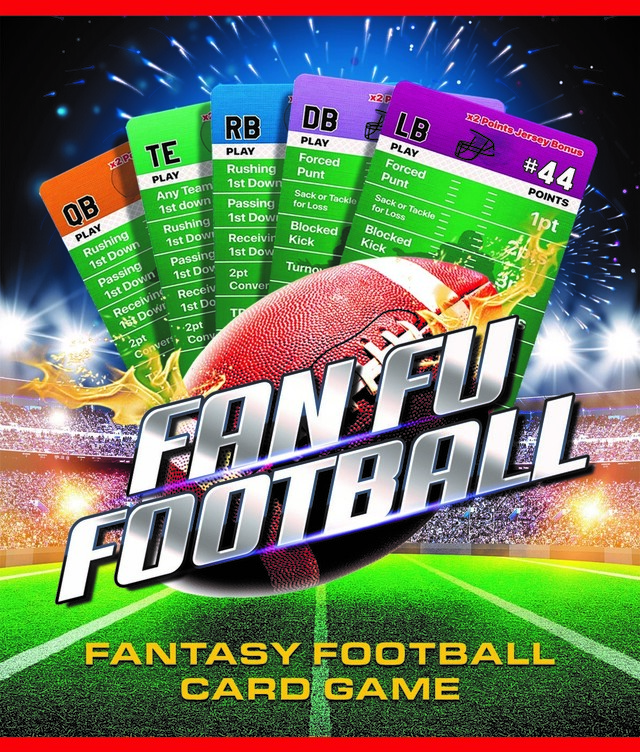 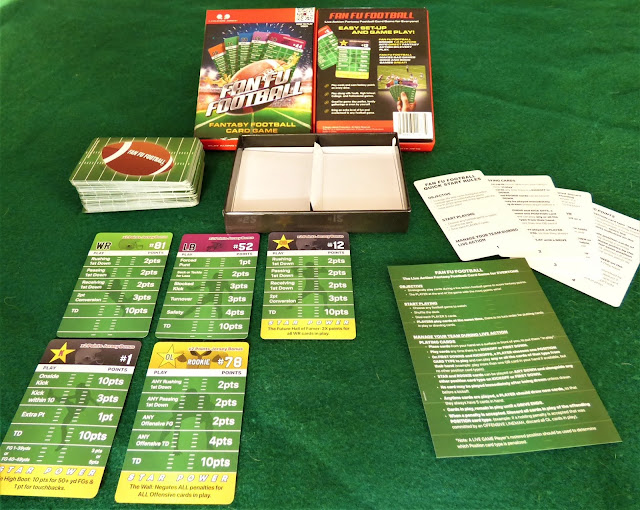 FAN FU FOOTBALL is the live action fantasy football card game designed to play along with live or recorded football games.
FAN FU FOOTBALL brings 1 – 4 players into direct fantasy competition at every kick-off. Football is a game of “Touchdowns” and “First downs”. Our simple game mechanics grant our players drive by drive action without infringing on watching the game.
Turn on a game, deal 5 cards, and on kick-off put fantasy cards “In Play”. Immediately redraw to a 5-card hand (draw after every card put in play).
On every subsequent first down, put more cards in play. The first “Drive” always begins with a kick-off and player also play on first downs, so each game usually starts with two plays, to start a “Drive”. Stack your cards of the same position or diversify your position cards to get maximum points on each drive of the game. Star and Rookie cards can be played at any time and can perform different actions and bonuses, as well as score points. 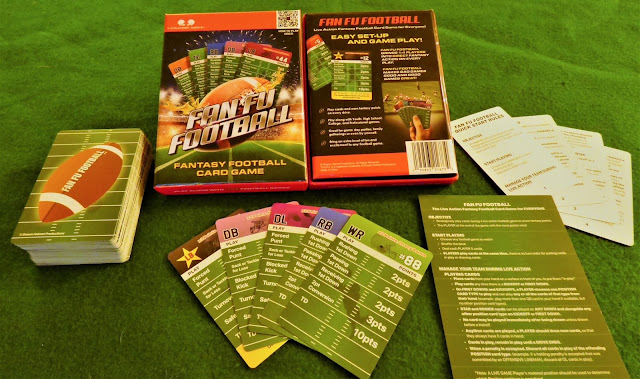 A “Drive” ends with a punt, turn-over, field goal or touchdown. If a “Drive” ends with a punt or turnover, score the points for the cards in “In Play” and discard them. When a “Drive” ends with a field goal or touchdown, score the points for the cards in “In Play”, discard them, as well as your hand, and draw a new hand.
Pick up and play on certain drives, per quarter, half, or a whole game. The easy scoring system helps keep track of the score.
Are you a gamer who loves sports too?  This game was built by gamers and requires strategy. Gameplay is based on live events, guaranteeing each round of FAN FU FOOTBALL will be unique. Whether the game is high scoring or low scoring, the proper strategy will allow players to score fantasy points. Players can utilize both offensive and defensive cards during a drive, adding flexibility to strategic play.
From youth to professional, play fantasy football with any game, anytime.  The portability of FAN FU FOOTBALL makes it easy to take to a friends’ house or to carry when traveling.  Great for game watching parties or family gatherings, combine multiple decks to add more players. You can also play a solo version, where you log your score for every solitary game and try to beat your high recorded score.
FAN FU FOOTBALL brings an extra level of fun and excitement to any game.
Enter the GIVEAWAY!
FAN FU FOOTBALL will be live on KICKSTARTER until Sat, June 5 2021 4:33 PM PDT, and has a funding goal of $9,999.
Find out more at BGG.