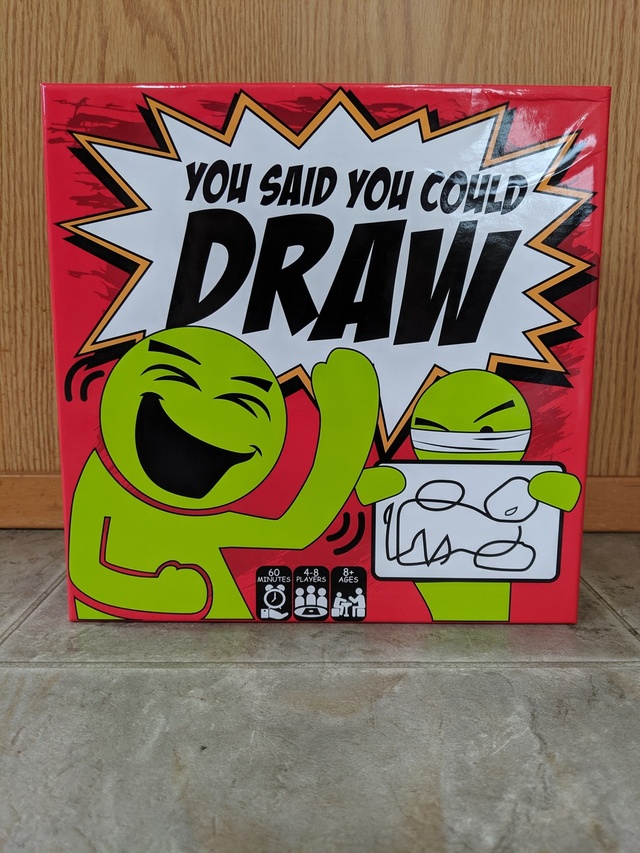 Quick Look: You Said You Could Draw

No. of Players: 3-8
Ages: 8+
Playing Time: 45-60 minutes
Find more info on BoardGameGeek.com
From the Publisher:


Put your skills under a blindfold with a whole new spin on the drawing game: You Said You Could Draw! everybody knows that one person who can draw anything, this game levels the playing field. 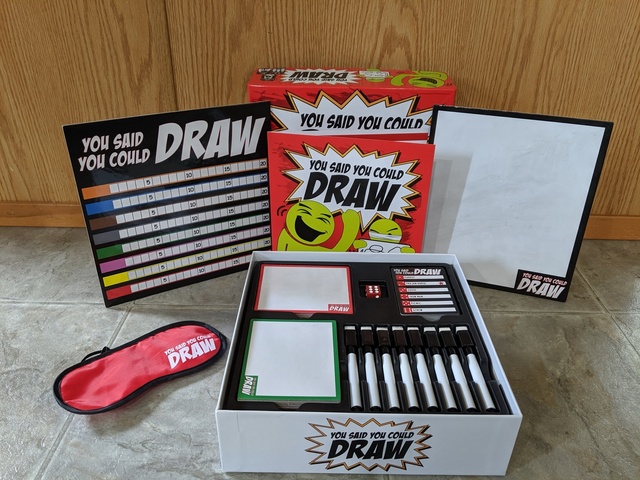 “You Said You Could Draw”…. you may be thinking: another drawing game, aren’t there quite a few already?! Pictionary, Telestrations, Cranium, Skribble Head etc…

My answer would be Yes! If I saw this game in the store, I won’t lie, I’d probably pass right by it thinking this is just another Pictionary spin-off. Not to mention, I personally don’t enjoy drawing, my skills in drawing are very rudimentary, consisting of stick figures, shapes and turning a capital letter “B” into a rabbit. The title of this game also assumes that I can and have bragged about my artistry skills which is another reason I’d initially have been deterred from buying it. However, I found it to be a really fun game and it would be worth the purchase, this game was very entertaining and is a hilarious game to play with friends or family members. The distinction between “You Said You Could Draw” to other drawing related games, is that you’re doing so while blindfolded. This actually makes the game quite enjoyable, and “levels out the playing field,” making drawing fair for all players, and creating lots of laughter and memories.

The rules are very clear and easy to understand, each player gets a mini board, and dry erase marker. The highest roller is first to be the artist, the artist will pick a card from the deck, roll the die to see which word it is they are required to draw, blindfold themselves and attempt the image on the larger drawing board. The artist then secretly writes a name of a player they think might guess their image correctly, if right they will earn a bonus point this round. The picture is shown to all other players who then guess what the image is and writes it down on their mini boards, one by one revealing their guess. Keeping score is very straight forward, and the dry erase score board is nice to have. If a player guesses the image correctly they get a point along with the artist, the artist gets a bonus point if the player they thought would guess their image did so correctly. 3 points are given to all players including the artist if it’s a word with a star next to it, and if all but one player guessed the image correctly the person whose incorrect has to subtract 2 points from their score. There were a few rounds where no one could guess the drawing and therefore no points were given, too many rounds like this can definitely increase the overall play time. It took us about 45 minutes for a player to just reach 10 points. So this game can easily go above the 60 minute time estimate. 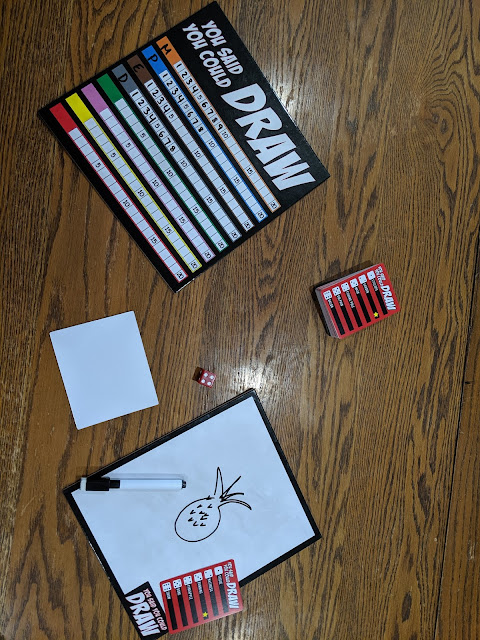 There are 3 different levels of play, for the easy level the artist is able to give a couple of clues, the first letter of the word and if it is one or two words. This sounds like it’d be too easy, but it can actually become more challenging some rounds when you think you know what the picture is but it doesn’t add up with the clues given. In the medium level, the artist can give only the first letter as a clue and only every other round, and in the hard level no clues are given. The first person to reach 20 points is the winner!

Our family was curious why the deck of cards were red on one side and black on the other, we wondered if one side was a higher difficulty level of things to draw? Or perhaps it was to add to the aesthetics of the game? We concluded it’s probably just to add to the replay value, having more words in general to choose from.  The minimum age recommendation for this game is 8 years old, this would depend on your child’s ability to read and to write. Our 6 year old son desperately wanted to play this game with us, since he’s not able to read or write proficiently enough to be on his own we teamed him up with Grandpa. He was so excited to draw blindfolded and drew better than I could! 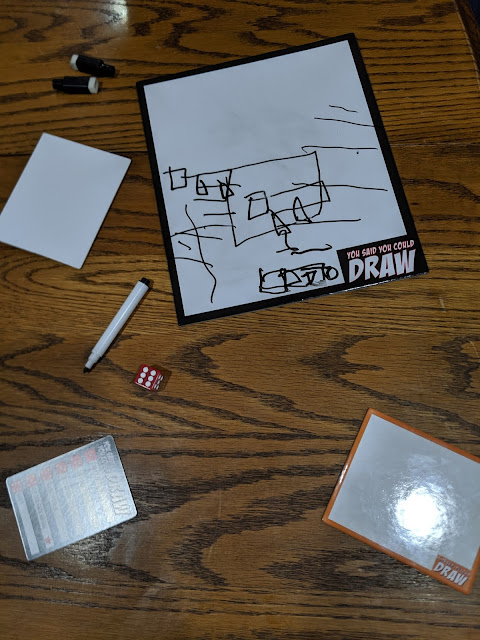 An addition I think would be helpful in this game would be adding in a timer so there is an allotted time for the artist to draw as well as for the players who are guessing the image.

Overall this was quite an entertaining game, and brings forth the Picasso artist in everyone!