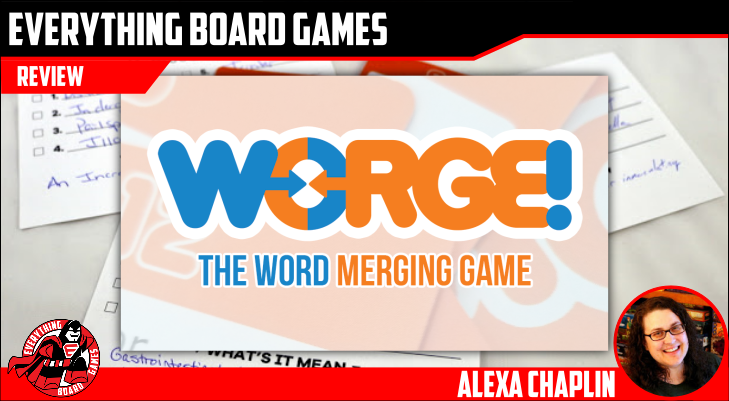 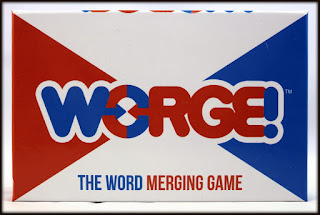 Worge is a multi-player card game for 2 or more players (although we recommend a group of 4+ for maximum fun) based on creating words that combine the sound/meaning of two different words (aka portmanteaus). Think hangry which combines “hungry” and “angry,” or brunch which combines “breakfast” and “lunch.” Worge combines the words “word” and “merge;” it’s our fun way of describing a portmanteau!

The really fun thing is, something you come up with during a round of Worge could become part of your group’s vocabulary for years to come. It’s the game that keeps on giving!

WARNING: This is a preview of Worge. All components and rules are prototype and subject to change.

Overview and Theme:
Worge is a word game that’s all about creating your own portmanteaus–words that blend two other words together, like brunch to mean a meal between breakfast and lunch or hangry to describe a person who is upset because they’re hungry. Or Worge, which is a word that has been merged!

Using given lists of words, players will work to create their own new blended words, and the Worge Master will judge each round and award a point to the best new word. 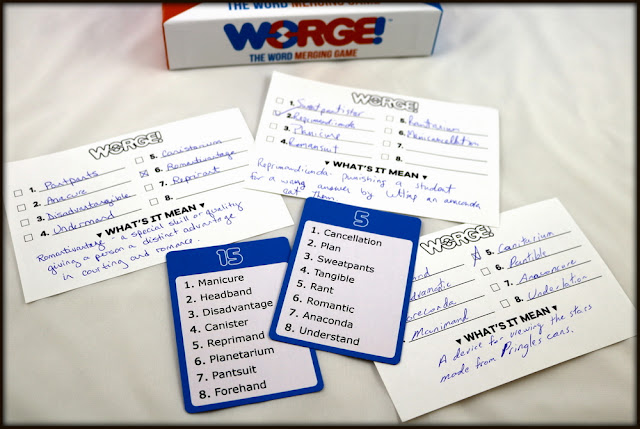 Components and Setup:
My prototype copy of Worge includes 120 word cards, a 2-minute sand timer, a pad of answer sheets, and the rules leaflet. The word cards are bright and bold with a total of 960 interesting words to choose from.

Setup is simple: put the word cards and timer in the middle of the table and give each player a piece of paper and something to write with (not included). 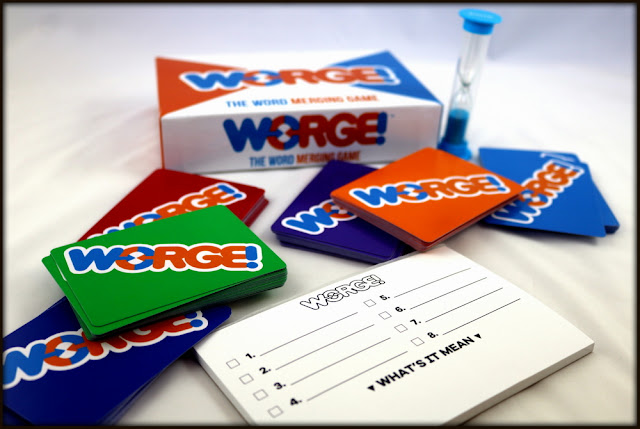 Gameplay and Mechanics:
It’s easy to explain Worge to your friends or gaming group and quick to get started. One player is the Worge Master for the round and flips over two word cards. All the other players now have 2 minutes to write down all the merged words they can find, and then will have 1 additional minute to choose their favorite and write down a definition for that word. All the papers are passed to the Worge Master, who reads them aloud and chooses their favorite, awarding that player one point. 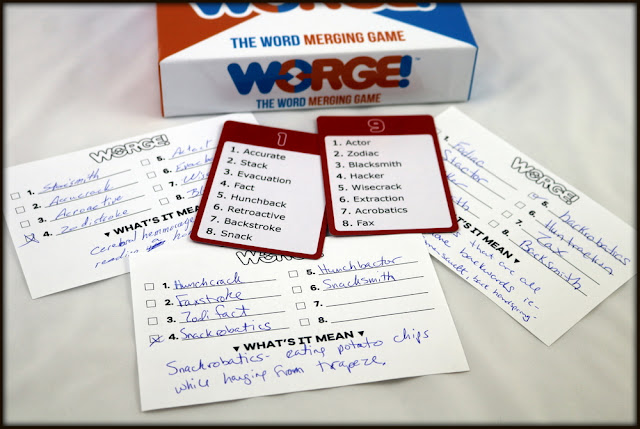 Players take turns being the Worge Master for new rounds until one player has collected a certain number of points (depending on the number of people playing). That’s all there is to it!

The word cards are definitely the heart of Worge, since they give you the raw material to work with. You might see a list of words like:

Using any of these words that you like (they can be from the same card or one from each), create your own portmanteaus like:

There are also special rules for playing with a smaller group, which include Scattergories–like scoring where you score points for every worge you created that no one else wrote down. 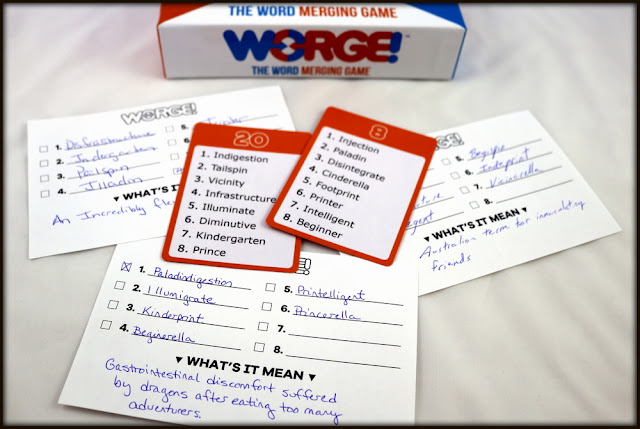 The Good:
Worge is the kind of party game that encourages creative thinking and you can almost be positive that hilarity will ensue. The words you create are bound to spark a laugh…and some of them may even linger in your group’s vocabulary long after the game ends.

As a gameschooling mom, I appreciate the way that Worge gets players thinking about words, and the building blocks of words, in a totally new way. It’s a great jumping off point for investigations into portmanteaus in common use, word roots, the sound of language, and more. Some of the words might be a little harder for younger kids to work with, but Worge was a hit with middle school and up. I’d love to see a Worge Junior edition in the future with words that were a little easier for elementary ages to merge! 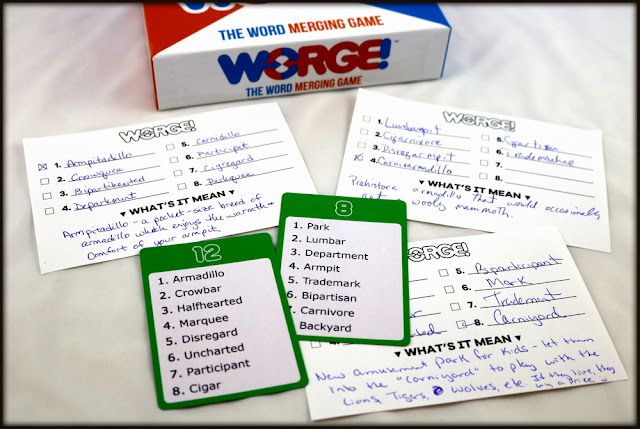 The Bad:
The biggest issue that our groups had with Worge was all too quickly running out of paper! The pad only had 50 sheets, which are already almost gone. Players agreed they’d love to see an edition of Worge with dry-erase boards instead, to give the game a longer life.

Players Who Like:
Players who enjoy word games like Things, Balderdash, or Wing It will likely enjoy Worge as well.

Final Thoughts:
Worge is a fun new twist on the word game, inspiring players to come up with new words and hilarious definitions. My family and friends enjoyed it, and it has plenty of great qualities for gameschoolers as well, so it’s a keeper! 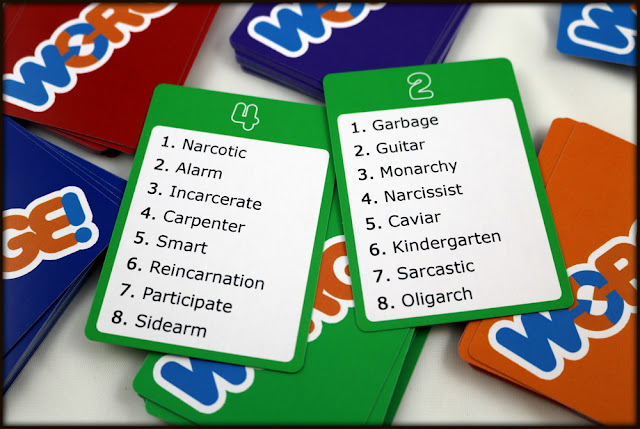 Check out Worge on: