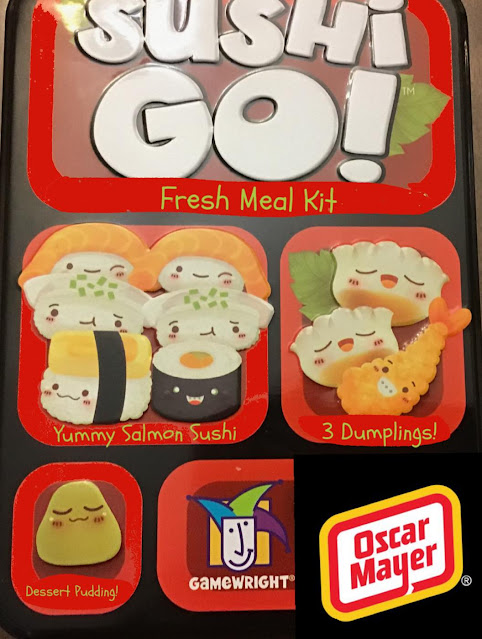 In a tasty new development, and due to popular demand, you may just be able to get more game when on the go!
In a fresh new announcement, Oscar Mayer, the same company who brought you Lunchables, has launched a new partnership with Gamewright to bring you Sushi Go lunch meals: for on the go eating!
Each Sushi Go! lunch box will include your choice of sushi, along with 3 dumplings and a dessert. For those of you who love to play Sushi Go! , you will be happy to know that each box will also contain an exclusive surprise Sushi Go! game card that you can incorporate into your regular games of Sushi Go!
If you’re unfamiliar with SushiGo! You might want to see what our reviewer Jazz Paladin had to say about it.
But that is not the only exciting news!
As a part of their new “Diversity” product line, gamers can also be on the lookout for another favorite roll-up food in both gaming stores and food markets!
That’s right! Get ready for Burrito Go!
The familiar gameplay of Sushi Go! will undergo some mainly cosmetic changes so that anyone familiar with the original game will be able to jump right into Burrito Go!
New cards for Burrito Go! include salsa to replace wasabi, carne asada , fajitas, bell peppers, queso, and more!
To add a new competitive edge, watch out for the new bean cards, which replace the original game’s dumplings. Get three bean cards in your deck and you can literally blow away your opponents by destroying one of their food combos in an explosive bio blast!
Sushi Go! meal kits are now available in your local grocery store, while you can expect to see the new Burrito Go product line in your local grocery and game stores just in time for Cinco de Mayo!
Happy eating and gaming!
To find out more on BGG click HERE!