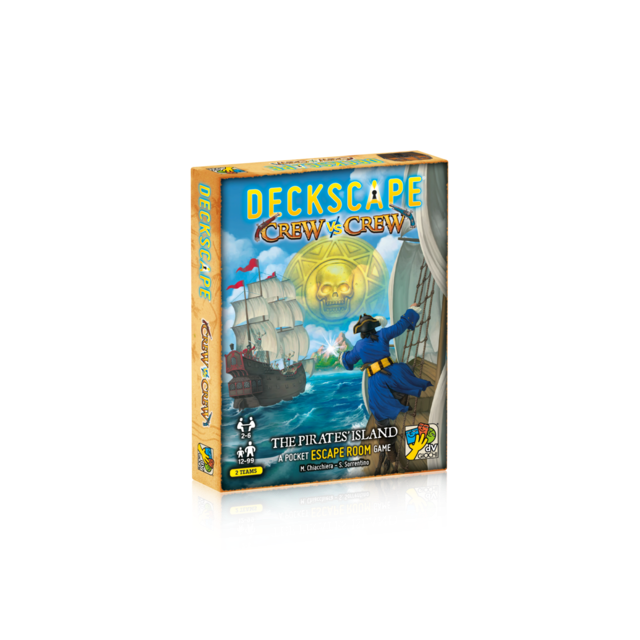 dV Giochi just announced The 8th chapter of the Deckscape game series has just been released in U.S. shops and they are now available in the European market, too.
DECKSCAPE – CREW VS CREW adds a competitive element to the game! For the first time, the players split into two teams (or two can play, head-to-head!) and try to correctly solve the puzzles before the other team does.
Blackbeard’s treasure is every greedy pirate’s dream, but only the smartest crew can take it! Players have to follow the map to distant islands filled with gunpowder, puzzles, and adventure! Each duel can bring more shiny doubloons to your stash: Which crew will win?
DECKSCAPE is a series of “escape room” style games designed by Silvano Sorrentino and Martino Chiacchiera. Each game is played using a deck of extra-large cards representing puzzles (with a solution on the flip side), items needed to solve the puzzles, or clues to the game’s story.
The Deckscape series has sold over 1 million copies and it has been translated into 13 different languages. Each of the adventures is unique thanks to its own cunning twist, so the adventures are always new and exciting!
Game design: Martino Chiacchiera, Silvano Sorrentino
No. of players: 2-6
Ages: 12-99
Artwork: Alberto Bontempi
Language: English
Suggested retail price: €10.90 – $14.90
Make sure to Follow them on Facebook, Twitter, Discord to stay up-to-date about our new products, streaming events and initiatives.